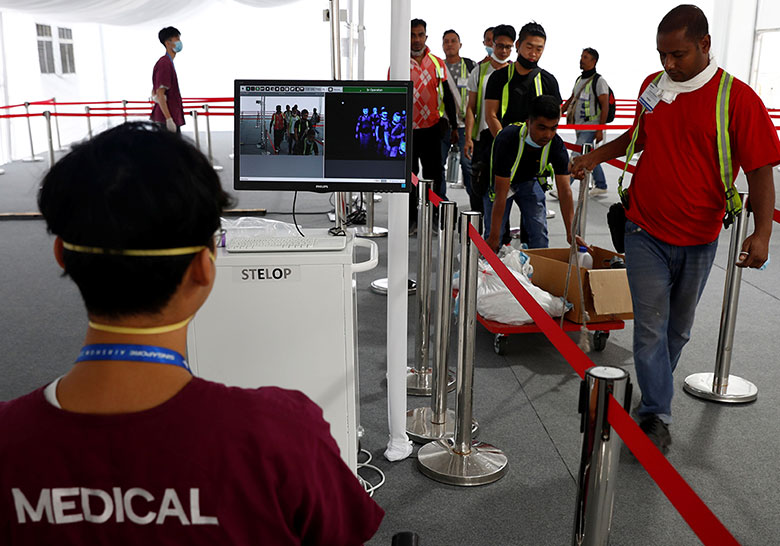 Singapore is the latest country to feel the heat from the coronavirus.

On Monday, it announced its 45th confirmed case, the largest number of infections outside China.

The Lion City’s financial sector is adapting as best it can. Most banks have told staff to work from home if possible. UOB has postponed roadshows, is restricting business travel and has closed offices in Shanghai, Beijing and Hong Kong.

Those working in the Marina Bay Financial Centre face a more visceral threat.

On Saturday, an employee in Tower 1 tested positive for the virus; when doors opened for business on Monday, bankers found the premises disinfected and industrial-quality temperature checkpoints in place.

Tower 1 is home to investment firm Wellington Management, Societe Generale and Standard Chartered, among others.

In a statement, Standard Chartered said it was ramping up medical screenings and in-office sterilization, and flagged up its “well-established business continuity plan (BCP)”.

The last point is the most compelling. Given that banks were so woefully unprepared for the global financial crisis – or were unwilling to look in the right places for fear of what they might find – and because so many negative new events typically focus on the industry’s latest massive damaging hack, it’s assumed they do not plan ahead.

Nothing could be further from the truth. Business continuity planning (BCP) has been around for years – though in its early iteration, it was an afterthought at best.

When a crisis occurred, be it a fire in a building or a political/regulatory event – say, the rise of a political party keen to limit the sector’s earning capacity – banks reacted as best they could, using available financial resources.

BCP is now integral to everything that a multinational lender does.

Banks and their shareholders, not to mention the regulators that oversee them in each operating market, may not think about it every waking moment, but when a crisis occurs, in this case the rapid spread of a deadly new Chinese pathogen, these units come into their own.

These guys know who to speak to in other countries – they source information very fast, talking to their peers in other countries, making daily calls, assessing threat-levels. They are very serious individuals

DBS has activated its BCP, which mostly involves temperature screening and asking staff to work from home. Rival lender OCBC is splitting its employees into two groups that will work from different locations.

In Hong Kong, most of HSBC’s staff are working from home this week: insiders say the headquarters in central is an eerie place, where the few hardy souls willing to make it in – plus those unable to dodge critical meetings – rattle around like frozen peas in a can.

For HSBC, there is a sense of déjà vu about the whole business. The rapid 2003 spread of Sars, a deadly pathogen similar to the coronavirus, elicits painful memories for the city’s dominant financial firm. It learned from those events and others, including the riots that roiled the city in 2019, which forced it to shutter branches and ATMs.

Like many multinational banks including Citi, HSBC has back-up sites, which it uses to sequester staff in the event of a genuine crisis, be it a sudden spike in coronavirus-related fatalities, or, say, the return of public disorder to Hong Kong, which may provoke Beijing to react with decision and force.

HSBC carries out quarterly drills where it war-games potential scenarios, which might include earthquakes, extreme weather events, power outages, terrorism or large-scale cyberattacks.

“We follow [Hong Kong Monetary Authority] guidelines, which place the emphasis of action – on being able to operate as usual – on us. We follow government guidance, sending people home if a colleague is sick, and asking anyone who has had direct contact with them to self-quarantine.”

On Sunday, the Monetary Authority of Singapore announced that all financial institutions had to be able to anticipate any uptick in demand for financial services. That includes stockpiling cash, keeping branches running smoothly and ensuring digital platforms suffer no freak outage.

The last thing the regulator wants is for people unnecessarily to conflate medical and financial panic.

Every commercial lender and investment bank has its own BCPs. A source at a leading western investment house in Hong Kong points to its back-up office in Kwai Hing, a suburb in the new territories, and a back-up to the back-up, located in a tower in Sheung Wan, in the west of Hong Kong island.

“Several major banks have an emergency work-site [in that tower],” the source says. “We go out there twice a year to test it. There are 100-plus desks; we can move a large portion of our workforce there at a moment’s notice in the event of a real crisis. It’s not coronavirus-specific continuity planning; it’s just good continuity planning.”

Many of those hired to run BCP at the biggest international financial institutions are hard-wired into local and regional political, cultural and financial frameworks.

Sources say western investment banks like to hire seasoned ex-cops from Hong Kong and Singapore: experts who have protected presidents and prime ministers, and have run Asia-wide security operations for senior executives at the world’s biggest firms.