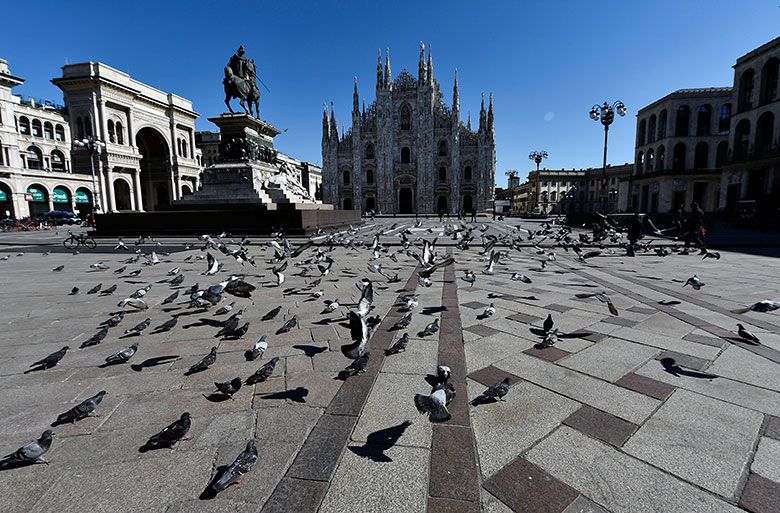 Duomo square, Milan, on Wednesday: devoid of the usual throng of people on the second day of a lockdown across Italy

Italy could provide a showcase for what is to come elsewhere in Europe as businesses are hit by the effects of the rapidly spreading coronavirus: people staying at home and not spending.

Italy’s financial sector and public finances are uniquely vulnerable to the Covid-19 crisis. Business loans, above all, are under threat, as Italy’s economic structure is particularly reliant on small and medium-sized businesses, while its judicial system has routinely proved itself incapable of processing collateral claims sufficiently quickly.

Davide Serra, Italian founder and chief executive of financial institutions specialist Algebris Investments, believes that there is little chance of a 2008-style liquidity crisis in Italy, or elsewhere in Europe’s banking sector.

His firm is buying into the debt and equity of national financial champions across the continent, as a result.

“Public money will be spent, and the Europe Union will allow it,” he says.

According to Serra, regulators and Italian banks, as elsewhere in Europe, will have to allow borrowers to suspend debt repayments, without it automatically meaning they must reclassify the loan as non-performing.

At the same time, the government will guarantee the debt of borrowers in the most affected regions and sectors, making the debt moratoria what he calls “economically neutral” to the banks.

Nevertheless, this will merely stave off an immediate banking crisis, rather than entirely remove the economic damage of the coronavirus on the banks, says Luigi Tramontana, analyst at Banca Akros.

“It is only a way of delaying the recognition of non-performing loans, to see how things will evolve, and if it’s a more profound crisis,” he says, discussing debt moratoria.

While another European Central Bank rate cut will eat more into banks’ net interest margins, the consensus opinion is that the rapid improvements in Italian banks’ asset quality over the last three years may already be over.

That could provide more rationale for deals including Intesa Sanpaolo’s €4.9 billion bid for UBI Banca, says one financial institutions banker.

Bank shares in Italy have already fallen by almost 40% since mid February from already steep discounts to book value.

Non-bank investors that made leveraged bets on Italian non-performing loan books over the last three years will also be in trouble, adds Serra.

The biggest question, everyone agrees, is how long the downturn in demand will be. If it is brief, will people start spending again after a month or two, making up for lost spending by using what they have saved while in isolation?

“If not, we are talking about going back to the Middle Ages: no company will survive,” says Stefano Visalli, founder of Oxy Capital, an SME-focused private equity company in Milan.

According Visalli, sales at his portfolio companies are down by a third or more on the same period last year.

Other business – such as restaurants and hotels – are seeing dips of up to 80%. This would seem to be unrecoverable lost spending.

People are postponing purchases of non-essentials from clothes to cars, with some retailers giving up and closing shop.

It’s not just cinemas, museums, and ski resorts that are closed by law in Italy, gatherings such as weddings and funerals, football matches and church services are also restricted. Bars and restaurants have a table-service only policy, and customers must stay a metre away from one another.

With the empty streets and cafes, “it’s like the month of August,” says Tramontana – only the foreign tourists have gone too, and no one is at the beach.

Unlike during the eurozone crisis, however, this time export-orientated companies may suffer due to the global nature of the crisis; manufacturers are already struggling due to supply-chain disruption from China, where the virus originated.

The accompanying hit to businesses’ P&L and cashflow means some companies may soon be forced to stop paying salaries and rent, never mind loans to banks.

“There’s a significant risk of a massive disruption if the government doesn’t react.”

In the banking sector, regulatory forbearance could offer more ways of preventing the economic downturn triggered by the coronavirus from turning into a financial crisis – whether it’s loosening the ECB’s calendar for provisioning of non-performing loans, or alleviating risk-weighted asset inflation required for rises in non-performing assets under the new IFRS9 accounting rules.

“They can’t cut rates, but they can use flexibility on the existing rules, and keep on providing liquidity,” says Serra.

Italy’s government is already moving to ramp up the €7.5 billion stimulus package, mostly consisting of tax breaks, that it announced in early March.

Some sources speculate the state could directly lend to SMEs, which has been one of the ways Japan has reacted to its coronavirus-related disruption (the Cassa depositi e prestiti, or CDP, would be the likely vehicle in Italy).

More fiscal stimulus could come, says Hugo Cruz, banks analyst at KBW – and if there is the right political will, as the outbreak spreads to Germany and elsewhere, regulators could loosen demands for Outright Monetary Transactions, allowing the ECB to offer further support to sovereign debt markets.

The spread between Italian and German 10-year government debt has risen by about 60% since mid February. However, Italy issued 10-year debt at a coupon of just 1.35% on March 9.

The European Commission has also shown readiness not to count one-off measures towards Italy’s budget targets.