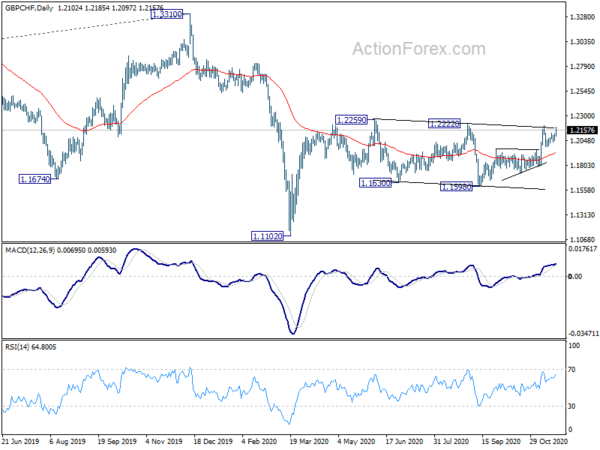 Dollar’s selloff resumes today as stocks rallies on more positive news on coronavirus treatment. British drugmaker AstraZeneca said it’s vaccine could be around 90% effective, and as many as 200 millions doses could be ready by year end. The news also lifts Sterling to be the best performer so far today. New Zealand Dollar and Euro are not far behind the Pound. Meanwhile, Yen and Swiss Franc are the worst ones next to the greenback, as traders leave the safe haven currencies behind.

Technically, developments in Dollar and Sterling are both worth a note. USD/CHF’s break of 0.9088 minor support suggests that fall from 0.9192 is resuming for a test on 0.8982 low. 1.1920 resistance in EUR/USD and 0.7339 resistance in AUD/USD will be watched to confirm more Dollar weakness. GBP/JPY breaches 138.83 minor resistance, nullifying near term bearishness and turn focus back to 140.31 resistance. 0.8866 support in EUR/GBP is a key level and firm break there would solidify deeper decline back to 0.8670 support and below. Firm break of 1.2222/59 resistance zone in GBP/CHF will also carry larger bullish implication and confirm resumption of whole rebound from 1.1102. 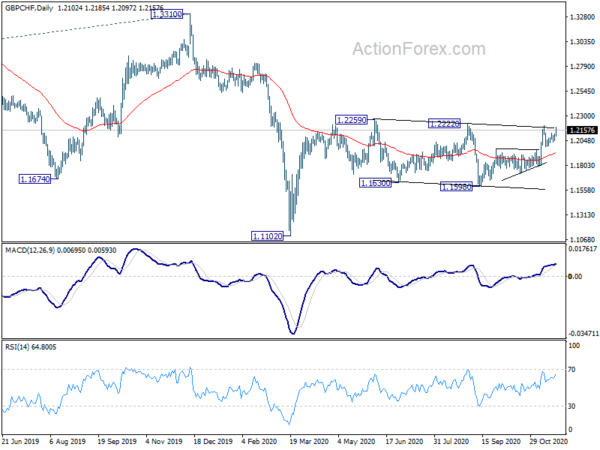 BoE Haldane: Reasonable to speak of 2021 as turning a leaf

BoE Chief Economist Andy Haldane said, “the vaccine announcements of the past few weeks offer hope at the end of the tunnel”. However, “even with a vaccine, it’s clear this crisis will lead to some lasting scars, particularly on the poorest and the most disadvantaged.”

Haldane added that around two-thirds of pandemic economic loss had been recouped so far. “It’s now reasonable and realistic to speak of next year as turning a leaf for us economically,” he said.”

Chris Williamson, Chief Business Economist at IHS Markit, said: “A double-dip is indicated by the November survey data, with lockdown measures once again causing business activity to collapse across large swathes of the economy… Some comfort comes from the data suggesting that the impact of the lockdown has not been as severe as in the spring, and manufacturing has also received a significant boost from inventory building and a surge in exports ahead of the UK’s departure from the EU at the end of the year, providing a fillip for many companies. However, while the lockdown will be temporary, so too will this pre-Brexit boost.”

Eurozone PMI composite dropped to 45.1, plunged back into a severe decline

Chris Williamson, Chief Business Economist at IHS Markit said: “The eurozone economy has plunged back into a severe decline in November amid renewed efforts to quash the rising tide of COVID-19 infections. The data add to the likelihood that the euro area will see GDP contract again in the fourth quarter…. The further downturn of the economy signalled for the fourth quarter represents a major set-back to the region’s health and extends the recovery period. After a 7.4% contraction of GDP in 2020, we are expecting only a 3.7% expansion in 2021.”

Phil Smith, Associate Director at IHS Markit said: “As expected, the introduction of new lockdown measures in November to combat the spread of COVID-19 has had a disruptive impact on German economic activity, with the flash PMI data showing the service sector suffering its worst performance since May. However, the resilience being e