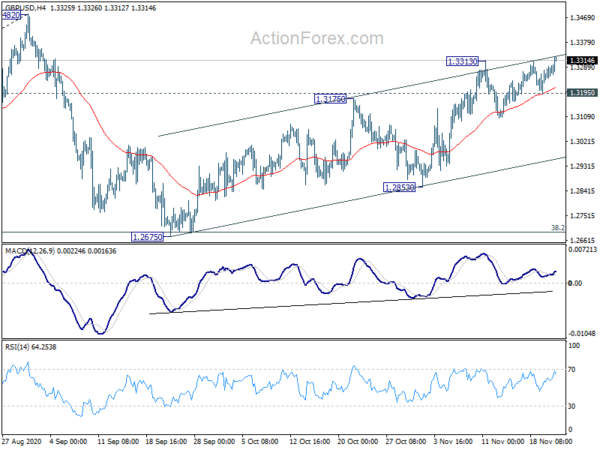 Sterling opens the week on firm footing as lifted by UK’s trade deal with Canada. There’s also report on increasing expectation of a deal with EU to be sealed this week. New Zealand Dollar is also firm after strong Q3 retail sales rebound. On the other hand, Dollar, Yen and Swiss are trading generally lower, even through downside is limited so far.

Technically, GBP/USD’s break of 1.3313 suggests resumption of rebound from 1.2675, for retesting 1.3482 high. But to confirm underlying rally in the Pound, we’d have to see at least a break of 138.86 minor resistance in GBP/JPY. More importantly, EUR/GBP has to take out 0.8866 key near term support decisively too.

ECB Lane: Economy will not exit pandemic crisis without being weakened over a long period of time

ECB Chief Economist Philip Lane admitted in an interview with Les Echos that current lockdowns will “lead to a drop in activity” in Europe. But the measures are “less harsh” than those in Spring. Now, “manufacturing has been kept open, construction is continuing, essential shops remain open, and there is not too much disruption to supply chains.” Hence, the impact is likely to be “less severe” this time. Still “the situation will not materially improve in the last weeks of 2020.”

Based on ECB’s projections, it’s assumed that coronavirus vaccine will be rolled out throughout 2021. Lane said “full recovery of GDP, back to where it was in 2019, will not happen before the autumn of 2022”. Also, “in spite of the vaccine, there will be some persistent damage and the European economy will not exit this crisis without being weakened over a long period of time.”

Over the weekend, the UK and Canada struck a rollover trade deal that underpins GBP 20B worth of trade after the Brexit transition period. The agreement “largely replicates” the EU deal on tariff reductions and provisions for labour and environment.

Separately, the UK and EU will enter their final week of negations. Chancellor Rishi Sunak told BBC that “no deal is better than a bad deal”. “We should not be going for a deal at any price, that would be the wrong thing to do and I think there are things that are important to us in these negotiations, and we’ve been entirely, as I said, reasonable, consistent and transparent.”

Bernard Aw, Principal Economist at IHS Markit, said: “Latest PMI data showed the recovery in the Australian private sector economy gained pace during November, setting the scene for a stronger GDP performance during the final quarter of 2020… That said, the subdued rise in new business remains a concern. Renewed lockdown measures in parts of the world due to second waves of infections may keep border controls and travel restrictions in place for a longer period, thereby dampening external demand. If Australian sales growth continues to lag behind the rise in business activity in the months ahead, the current economic recovery could risk losing momentum.”

Fed and ECB minutes, PMIs to highlight the week

Fed and ECB will release meeting minutes this week. Some attention could be on ECB’s discussions regarding their policy recalibration in the December meeting. On the data front, PMIs from Australia, Eurozone and UK will catch most attention while Germany will release Ifo business climate. A bunch of US data will also be featured including durable goods orders, and personal income and spending. Here are some highlights for the week:

GBP/USD’s break of 1.3313 resistance suggests resumption of rebound from 1.2675. Intraday bias is back on the upside. Sustained break of channel resistance will indicate upside acceleration, and break retest of 1.3482 resistance. On the downside, through, break of 1.3195 minor support will mix up the near term outlook and turn intraday bias neutral first. 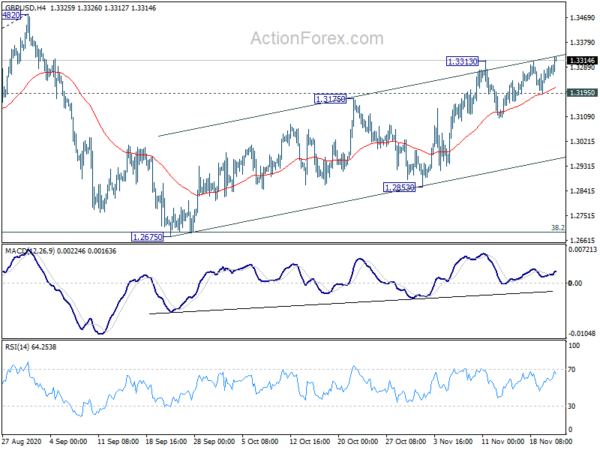 In the bigger picture, focus stays on 1.3514 key resistance. Decisive break there should also come with sustained trading above 55 month EMA (now at 1.3308). That should confirm medium term bottoming at 1.1409. Outlook will be turned bullish for 1.4376 resistance and above. Nevertheless, rejection by 1.3514 will maintain medium term bearishness for another lower below 1.1409 at a later stage. 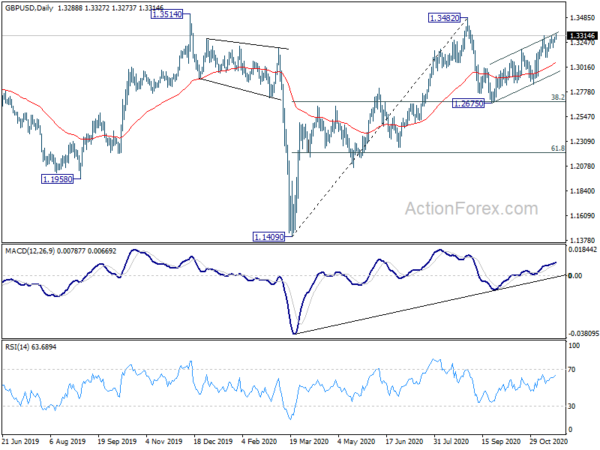