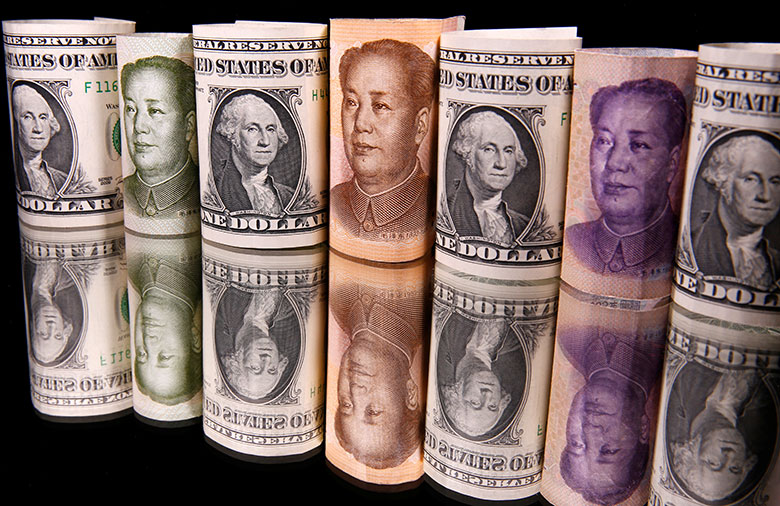 For good reason. Anyone not focused on US politics or Australian fires was fretting about the growing threat of coronavirus.

While too late to prevent the pathogen escaping into the wider world, China has pumped $22 billion into its markets and cut banks’ reserve ratios. More monetary and fiscal stimulus will surely follow.

However, it’s worth backtracking to Swift’s January report. That it garnered little traction doesn’t matter: it’s what it contains that matters.

Reading the title, you’d assume China’s currency, the renminbi, was well on track to being an international currency. Yet since its inclusion in the IMF’s basket of special drawing rights in October 2016, the RMB’s star has, if anything, waned.

In December 2017, Swift reckoned it to be the fifth largest payments currency, with a global market share of 1.61%. Two years later, that number had risen slightly to 1.94%, yet the RMB slipped in the rankings to sixth behind the Canadian dollar, with Australia’s and even Hong Kong’s dollar nipping at its heels.

In international payments, the yuan is eighth, exactly where it was two years ago, while its share of the global trade finance market has shrunk, alarmingly so, to 1.46% in December, against 2.45% two years earlier, while the US dollar has gained in strength, its hegemony unchecked.

That’s quite a kick in the teeth for Asia’s largest economy, and the world’s biggest exporter and trader.

Or is it? Anyone who does business in China knows well its ability to be headstrong yet pragmatic. Beijing often pushes to get what it wants and then judiciously weighs up its next step.

As a decision-making apparatus, it can run hot and cold on issues, depending on who within the party machine has clout, the president’s ear, or both.

Zhou Xiaochuan had plenty of the first but less of the second, so in his last years as governor of the central bank, he often used the internationalization of the yuan as a threat-gesture.

China believes it wants a global currency, but is it willing to pay any price to get that? I would say no

“It was a tactic, used by reformers to force state firms to be more efficient,” says Michael Taylor, Asia-Pacific chief credit officer at Moody’s.

Since Zhou left office in 2018, talk of the RMB as a reserve currency has waned perceptibly.

There are good reasons for this. Beijing has bigger fish to fry, whether riots on its periphery, ballooning debts or hostility from protectionist governments in the US and Europe.

Hong Kong, which accounts for 75% of RMB-denominated payments, was hit by riots for much of last year, directed in part at throttling Chinese control.

Even allies are downbeat about its prospects. For years, Moscow’s state media trumpeted the RMB as the coming currency, yet when asked in November, Vladimir Putin said tartly that Russian firms and banks were “not interested” in raising money in renminbi, pointing to its limited convertibility. Some reality check.

Russia’s president, not for the first time, is an able appraiser of weakness. China clearly wants the kudos that comes with having a globe-trotting currency: a truly international yuan would allow it to play power-politics with Washington, and give it a valuable offensive and defensive weapon when settling all manner of financial and economic disputes.

However, is it willing to incur risk to embrace reward? No, says Mike Pettis, a professor of finance at Peking University’s Guanghua School of Management.

“China believes it wants a global currency, but is it willing to pay any price to get that?” he asks. “I would say no – you can’t have a global currency without scrapping capital controls, and that would leave it vulnerable to all manner of external financial shocks and crises.”