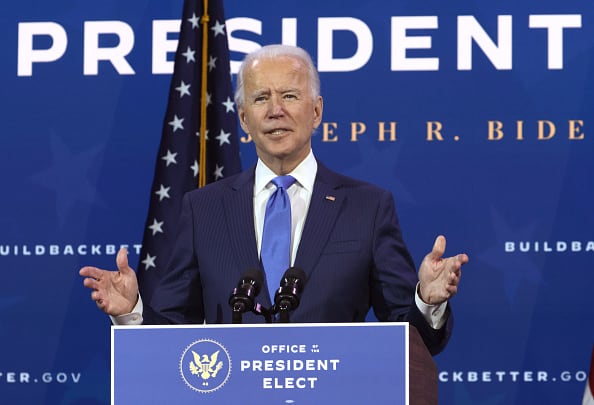 U.S. President-elect Joe Biden speaks during an event to name his economic team at the Queen Theater December 1, 2020 in Wilmington, Delaware.

Biden in a statement said the latest report on the U.S. labor market, which showed significantly slowing job growth amid the coronavirus pandemic, “confirms we remain in the midst of one of the worst economic and jobs crises in modern history.”

“This is a grim jobs report. It shows an economy that is stalling,” Biden said.

The statement noted that the “dire jobs report” only offered a snapshot of the situation in November, “before the surge in COVID cases and deaths in December as we head into a dark winter.”

“If Congress and President Trump fail to act, by the end of December, 12 million Americans will lose the unemployment benefits they rely on to keep food on the table and pay their bills. Emergency paid leave will end. The moratorium on evictions will expire. States and cities will lose vital tools they need to help pay for testing and public health workers to fight COVID, to keep children and educators safe in schools, and to provide assistance to keep small businesses alive,” Biden said.

But Biden said he was “encouraged” by progress being made on Capitol Hill, where congressional leaders are signaling “momentum” in the protracted negotiations over an additional pandemic relief bill.

“In the weeks since the election ended, there were questions about whether Democrats and Republicans could work together. Right now, they are showing they can. Congress and President Trump must get a deal done for the American people,” Biden said.

Still, he added that “any package passed in the lame duck session is not enough. It’s just the start.”

“Congress will need to act again in January. As we inherit this economic crisis, Vice Presiden