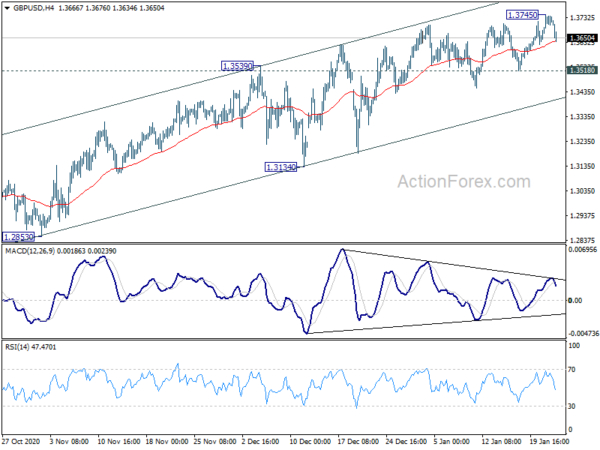 Dollar rebounds broadly today following receding risk appetite. Investors are apparently paring their gains in stocks. Swiss Franc and Euro are the next strongest, followed by Yen. On the other hand, Australian Dollar and Sterling are the worst performing. In particular, the Pound was weighed down by sharp deterioration in manufacturing data. Over the week, Dollar is still the worst performing but Aussie has the potential to overtake it before close. Euro is still the strongest one, followed by Swiss Franc.

Sales were up in 7 of 11 subsectors, representing 53.4% of retail trade. In volume terms, retail sales rose 1.2% in November.

“A steep slump in business activity in January puts the locked-down UK economy on course to contract sharply in the first quarter of 2021, meaning a double-dip recession is on the cards. Services have once again been especially hard hit, but manufacturing has seen growth almost stall, blamed on a cocktail of COVID-19 and Brexit, which has led to increasingly widespread supply delays, rising costs and falling exports.

“Worryingly, January also saw companies reduce headcounts at an increased rate again – albeit less so than seen between March and November. The steepest loss of jobs was recorded in the hotels, restaurants, travel and leisure sectors, reflecting the new lockdown measures.

“Encouragingly, the current downturn looks far less severe than that seen during the first national lockdown, and businesses have become increasingly optimistic about the outlook, thanks mainly to progress in rolling out COVID-19 vaccines. Business hopes for the year ahead have risen the highest for over six-and-a-half years, boding well for the economy to return to solid growth once virus restrictions ease.”

Chris Williamson, Chief Business Economist at IHS Markit said: “A double-dip recession for the eurozone economy is looking increasingly inevitable as tighter COVID- 19 restrictions took a further toll on businesses in January…. Some encouragement comes from the downturn being less severe than in the spring of last year, reflecting the ongoing relative resilience of manufacturing, rising demand for exported goods and the lockdown measures having been less stringent on average than last year…

“The roll out of vaccines has meanwhile helped sustain a strong degree of confidence about prospects for the year ahead, though the recent rise in virus case numbers has caused some pull-back in optimism. The survey data therefore add to the view that t he eurozone will see a soft start to 2021, but that the economy should pick up momentum again as the vaccine roll out gathers pace.”

Germany PMI manufacturing dropped to 57.0, services down to 46.8

Phil Smith, Associate Director at IHS Markit said: “There were few surprises from January’s flash Germany PMI release, with the manufacturing data remaining strong but showing a slight loss of momentum, while services activity was further depressed by the lockdown measures introduced in the middle of December. All in all, the German economy has made a slow start to the year, and the extension of the current containment measures until at least mid-February means this looks like being the picture for several more weeks to come.”

France PMI composite dropped to 47 in Jan, but return of employment growth a big positive

Eliot Kerr, Economist at IHS Markit said: “The French private sector started the new year as it ended the last, with COVID-19 restrictions driving a further decline in business activity. However, there were one big positive to be gleaned from the latest PMI data, and that was the return of employment growth. The fact that firms have returned to recruitment activity points to some confidence in an economic recovery in the second half of this year. That confidence was also evident in the broader expectations figures, which were only slightly off December’s 11-month high.

Usamah Bhatti, Economist at IHS Markit, said: “Short-term activity will undoubtedly be hampered by rising coronavirus disease 2019 (COVID-19) cases, as the government declared a state of emergency in Tokyo and introduced further measures to curb rising infection rates. As a result, positive sentiment weakened across the private sector. Firms are still predicting growth over the coming 12 months, although concern remains that the impact of the pandemic will be prolonged.”