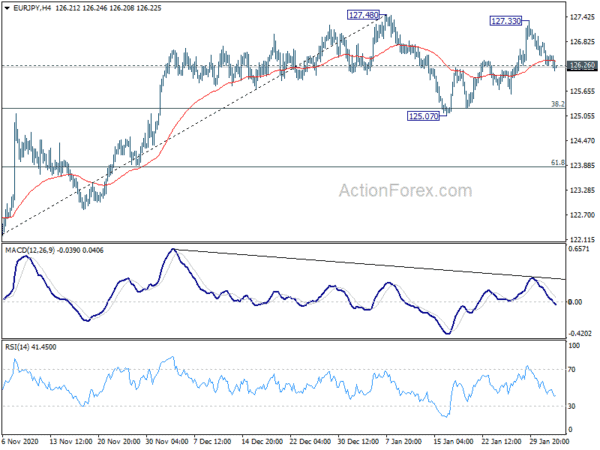 Economic data released today are largely ignored so far. Euro’s weakness continues despite stronger than expected inflation reading. Swiss Franc and Sterling are also softening slightly. Dollar, on the other hand, struggles to extend gain after much stronger than expected ADP employment. New Zealand Dollar continues to trade as the strongest one, taking the Aussie slightly higher. Yen is mixed while stock markets lack a clear direction for the day.

“The labor market continues its slow recovery amid COVID-19 headwinds,” said Ahu Yildirmaz, vice president and co-head of the ADP Research Institute. “Although job losses were previously concentrated among small and midsized businesses, we are now seeing signs of the prolonged impact of the pandemic on large companies as well.”

PPI came in at 0.8% mom, -1.1% yoy in December, versus expectation of 0.7% mom, -1.3% yoy. Industrial producer prices in the Eurozone in December 2020, compared with November 2020, increased by 2.2% in the energy sector, by 0.4% for intermediate goods and by 0.1% for capital goods and for durable consumer goods, while prices remained stable for non-durable consumer goods. Prices in total industry excluding energy increased by 0.3%.

Chris Williamson, Chief Business Economist at IHS Markit said: “The eurozone economy endured a predictably tough start to 2021… especially in the service sector…. A contraction of GDP therefore looks likely in the first quarter, though on current trends this should be modest in comparison to the falls seen in the first half of 2020.

“However, with virus containment measures likely to constrain euro area economies in the coming months, and potentially well into the second quarter given the slow vaccine roll-out, the focus will be on the need to sustain supportive fiscal and monetary policymaking for some time to come, notably to prevent further intensifying job losses in the hardest hit sectors, such as hospitality, tourism, travel and retail.

Tim Moore, Economics Director at IHS Markit: “While the UK economy is on course to contract sharply during the first quarter of 2021, businesses remain confident that pent up demand and an easing of pandemic restrictions will provide a springboard to recovery later this year.

“Positive news on the UK vaccine rollout pushed up business optimism to its strongest since May 2014 and this improvement contrasted with a decline in confidence reported by service providers in the euro area during January.”