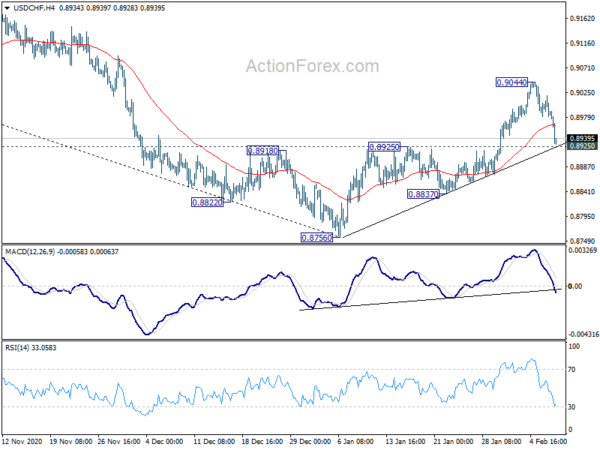 Dollar stays generally weak entering into US session. But as risk appetite cools slightly, buying focus is turning to Swiss Franc and Yen. Euro is currently following the two as the next strongest. Canadian Dollar is following Dollar as second weakest, then Aussie and Kiwi.

Italy 10-year yield dropped to record low of 0.501% in early trading and remains low for the moment. Former ECB President Mario Draghi seemed to be winning confidence from a wide spectrum of political parties, as well as investors, for forming a new government.

Draghi will continue to meet with parties to get their backing. Yesterday, he reiterated that a common Euro-are budget will be one of his key priorities. He’s seen as someone who’s “pro-EU” and “pro-reform” at the same time, who could prompt a paradigm shift for the country.

Australia NAB business confidence rose to 10, but conditions dropped to 7

“Business started the year on a more optimistic note, even as conditions eased from the strength we saw in December. Importantly, employment conditions remain in positive territory – so overall businesses are still expanding their workforce,” said Alan Oster, NAB Group Chief Economist. “The decline in conditions was broad-based across industries, except for a small improvement in recreation & personal services, which continues to make small gains as restrictions ease.”