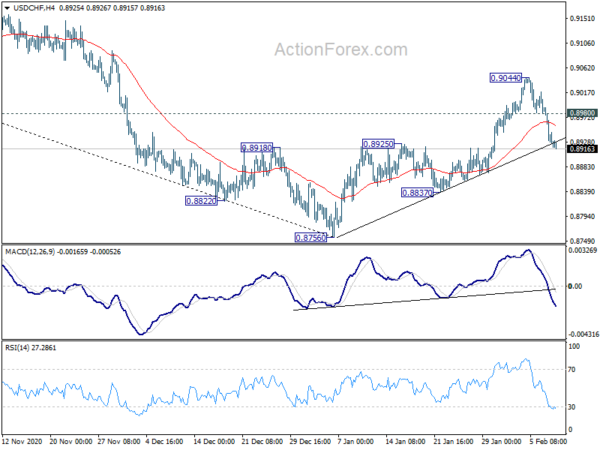 Dollar stays broadly weak in Asian session today even though general sentiments stabilizes. Risk-seeking trading is taking a breather somewhat after US stocks hit new intraday higher overnight. Euro is currently the stronger one for today, followed by Sterling. But Swiss Franc and Yen are currently the best performing ones for the week so far. Commodity currencies are lagging behind.

Technically, USD/CHF’s break of 0.8925 resistance turned support is another sign of Dollar weakness. Next focuses will be 0.8837 support in USD/CHF and 1.2188 resistance in EUR/USD. Break of these levels will likely push Dollar to new lows. Meanwhile, break of 104.39 support in USD/JPY and 1.2662 support in USD/CAD will further seal the case of near term bearishness in the greenback. We’ll see.

BoJ board member Toyoaki Nakamura said the March policy review will seek ways to make the easing framework more “effective” and “sustainable”. The review will also looking into whether the asset purchases and various tools are “exerting intended effects”.

Nakamura maintained that ETF purchases “will remain a necessary tool” to eradicate the deflationary mindset”. But “this is not just about ETFs but by buying huge amounts of assets and holding onto them for a prolonged period, the BOJ could affect market functions. That is something we need to be mindful of”.

Australia Westpac consumer sentiment rose 1.9% to 109.1 in February. The index hit a 10-year high at 112.0 in December, then retreated to 107.0 in January. February’s bound-back “signals that consumer remains extraordinarily confident”, noted Westpac.

Westpac said RBA’s move to extend the QE program by AUD 100B in February, not in March, “emphasises the Board’s commitment to providing as much support as necessary to assist the economy in closing the output gap that has opened up during the pandemic.”

It expects further extensions of QE after RBA’s next program completes in October.

RBNZ Orr: Many Covid-19 risks are still with us

RBNZ Governor Adrian Orr told a parliamentary committee today that “many covid-19 related economic risks are still with us”. “Although recovery is now underway, it will be a lengthy and difficult process but we are well prepared for this challenge and we stand ready to provide stability and support,” he added.

The central announced yesterday to tighten up the Loan-to-Value Ratio (LVR) restriction again to reduce the financial stability risk caused by high-risk mortgage lending. Orr said the central bank was trying to “head off excesses in housing leverage” with the move.

Germany CPI and France industrial output will be featured in European session. US will release CPI later today.

USD/CHF’s break of 0.8925 resistance turned support, as well as the near term trend line, argues that corrective rise from 0.8756 has completed, with three waves up to 0.9044. Intraday bias is turned back to the downside for 0.8837 support first. Break will bring retest of 0.8756 low. On the upside, above 0.8980 minor resistance will turn bias back to the upside to resume the corrective rebound form 0.8756 instead.