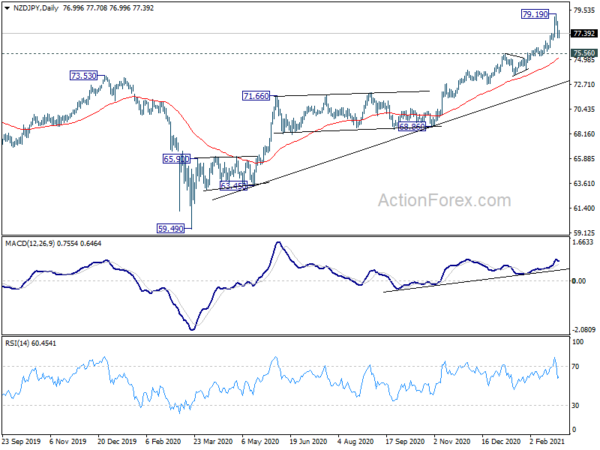 Commodity currencies and Sterling recover broadly as sentiments in Asian markets stabilized, after mixed economic data. In particular, Nikkei is trading up over 2% at the time of writing, with help from strong PMI manufacturing. On the other hand, Yen turn softer together with Swiss Franc, Dollar and Euro. But majority of major pairs and crosses are bounded inside Friday’s range, suggesting movements are relatively limited.

Technically, commodity Yen crosses will be worth a watch this week. In similar outlook to stock indices, despite deep pull back in AUD/JPY and NZD/JPY last week, there is no clear indication of trend reversal yet. As long as 80.91 support in AUD/JPY and 75.56 support in NZD/JPY holds, we’d still expect the near term up trend to resume sooner rather than later. However, firm break of these levels, in tandem with deeper decline in stocks, could confirm the start of a medium scale correction in risk sentiments.

China Caixin PMI Manufacturing dropped to 50.9 in February down from 51.5, missed expectation of 51.5. That’s also the worst reading since last May. Output expanded modestly amid notably softer rise in new work. Pandemic weighed on exports sales and supplier performance. Though, business confidence improved on hopes of global economic recovery in months ahead.

Wang Zhe, Senior Economist at Caixin Insight Group said: “To sum up, the momentum of the manufacturing recovery further weakened as the supply and demand both rose at a slower clip, adding pressure on employment. The prices of raw materials continued to increase and inflationary pressure continued to grow. Despite the headwinds mentioned above, manufacturers became more optimistic about the outlook for their businesses.”

Japan PMI Manufacturing rose to 51.4 in February, up from 49.8. That’s the strongest reading since December 2018, as manufacturers gradually recovered from the impact of the pandemic. Markit also noted that output and new orders expanded modestly. Input prices rose at fastest pace for two years. Positive sentiments reached strongest since July 2017.

Usamah Bhatti, Economist at IHS Markit, said: “Concern has been building throughout the Japanese manufacturing sector regarding ongoing supply chain disruption, which has induced sharp rises in the prices of raw materials. Cost burdens faced by firms rose at the sharpest pace in two years… Japanese manufacturers continued to report a positive outlook beyond the immediate future… in line with the IHS Markit forecast for industrial production to grow 7.4% in 2021, although this is from a low base.”

Ai Group Chief Executive Innes Willox said: “Australia’s manufacturers lifted production and employment in February as sales recovered a large share of the ground lost in 2020. Growth was distributed broadly across manufacturing… Manufacturers are generally positive about the outlook for the next few months with new orders coming in at a greater pace as restrictions on activity and cross-border travel are hopefully wound back.

Employment and prices related data to be the focus

Some activity indicators would catch much attention this week, including US ISMs, China PMIs, Canada PMIs and Australia AiG indices. In particular, both employment and inflation related components of those data will be scrutinized. Fed’s Beige Book will also be watched for the two issues. Additionally, US will release non-farm payrolls and Eurozone will release CPI flash.

RBA rate decision could be a non-event as the central bank will stand pat, and deliver a similar statement to February’s. Australia will also feature GDP and retail sales.