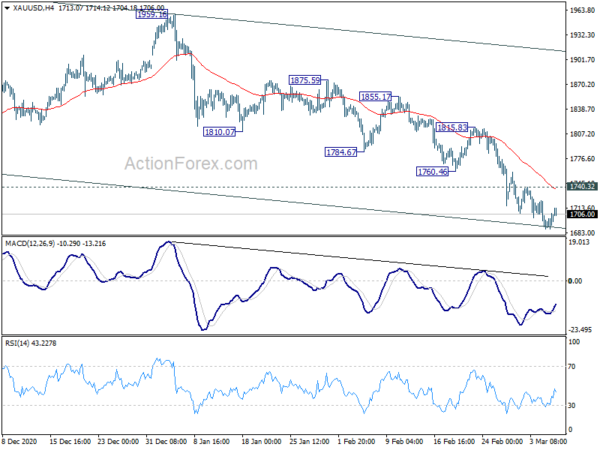 The Asian markets opened the week relatively mixed. Stocks gained initially on US Senate passage of the USD 1.9T stimulus bill. But sentiments are weighed down by concerns of inflation as oil prices jumped. Dollar is firm against Yen, Euro and Swiss Franc and look set to continue with last week’s rally. But the greenback struggles to pick up momentum against commodity currencies, except Kiwi. Gold is struggling to get persistent buying despite recovery attempt.

Technically, further rise is still in favor in Dollar, in particular against Euro, Swiss and Yen. Levels to watch include 1.1990 minor resistance in EUR/USD, 0.9192 minor support tin USD/CHF and 107.81 minor support in USD/JPY. Dollar’s rally is not under threat as long as these levels hold. Additionally, more downside is expected in gold as long as 1740.32 minor resistance holds. Another round of selloff could push gold through medium term channel support, while prompt some downside acceleration. That would create a favorable condition for Dollar to extend rally.

The impressive data could be distorted by usual volatility for the January to February period. Additionally, the strong growth partly reflected the low base set in 2020. Nevertheless, some analysts still noted the strong rebound in both global and domestic demand.

Stock traders were not too impressed with the data though. Hong Kong HSI quickly reversed initial gains and it’s currently down -1.6%, or -470 pts, at the time of writing. Immediate focus is now on last week’s low at 28513.13. Break there will extend the correction from 31183.35.

Oil price rises today, in response to news of attack on Saudi Arabia’s facilities over the weekend. Energy Ministry confirmed that its largest export terminal at Ras Tanura in the Persian Gulf received drone attack on March 17, allegedly launched by Iranian backed Houthi rebels from Yeomen.

“Such acts of sabotage not only target the Kingdom of Saudi Arabia but also the security and stability of energy supplies to the world, and therefore, the global economy,” the ministry said.

ECB and BoC to meet, US inflation data watched too

Two central banks will meet this week and ECB is the main focus. Policymakers appeared to be increasingly uncomfortable with rise in global treasury yields. Yet, it’s generally seen that it’s not yet the timing to announce any counter measures. Though, the markets would be very eager to hear hints on the central bank’s actions, probably step up of asset purchase, when necessary.

BoC rate decision will, on the other hand, be more likely a non-event. No change in policy is expected while BoC will likely hold any change in outlook, or forward guidance, until April’s Monetary Policy Report. Friday’s Canadian job data will be more market moving.

On the data front, US inflation data, CPI and PPI, catch some attention. UK will also release GDP and productions. Here are some highlights for the week:

Intraday bias in USD/JPY remains on the upside at this point. Current rally from 102.58 should target long term channel resistance at 110.02 next. Decisive break there will carry larger bullish implications. On the downside, below 107.81 minor support will turn intraday bias neutral and bring consolidations. But outlook will stay bullish as long as 106.21 resistance turned support holds.