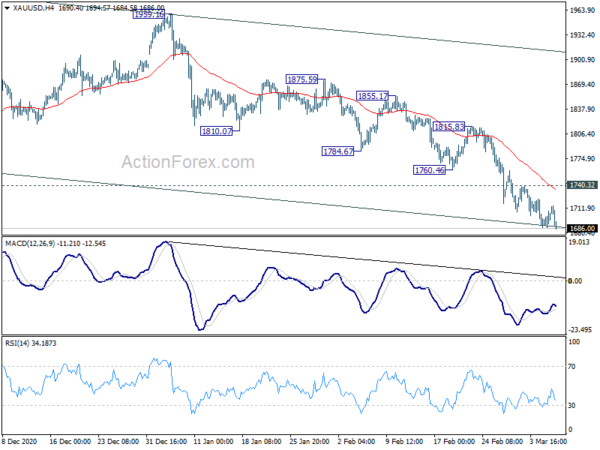 Dollar’s rally continues today but buying is mainly centered against Euro, Swiss Franc and Kiwi. Euro is getting no support from better than expected investor confidence data. Thanks to some resilience in crosses, Sterling is following as the second strongest for now. Commodity currencies are trading mildly softer but they’re generally holding above Friday’s low. Risk sentiment in European market is mixed and traders would look into the development in the US, in particular in tech stocks, as well as treasury yields.

Technically, one focus is on whether NASDAQ would break through last week’s low at 12397, and how DOW and S&P 500 would react if that happens. That could drive the volatility in commodity currencies. 10-year yield is current pressing 1.6 handle but question remains on whether it could extend the rally beyond this level. Gold is also resuming recent down trend by taking out Friday’s low. Attention will be on sign of downside acceleration below the medium term channel support.

Eurozone Sentix rose to 5 in Mar, investors betting on faster opening of economy

Sentix said: “On a positive note, the pandemic seems to have peaked at the global level and vaccination is also progressing well in that the number of immunised individuals is increasing and statistics suggest that effective vaccination protection is being achieved. These trends allow for a faster opening of the economy. This is what investors are betting on.”

BoE Governor Andrew Bailey said in a speech that the February forward guidance is a “a recognition of the scale of the shock, the high level of uncertainty and the risks around the Covid recovery, which are still on balance distributed on the downside, though less so as time goes by”. It also set out that there is a “burden of proof” policymakers will need on the “sustainability of the recovery”.

He also reiterated that while BoE asked banks to make preparations for negative interest rates within the next six months, it “should not be interpreted as a signal about the future path of monetary policy”. “This implies nothing about our intentions in that direction, and nor does it imply that negative rates are our chosen marginal policy tool”, he added.

BoE’s February forward guidance: “If the outlook for inflation weakens the Committee stands ready to take whatever additional action is necessary to achieve its remit. The Committee does not intend to tighten monetary policy at least until there is clear evidence that significant progress is being made in eliminating spare capacity and achieving the 2% inflation target sustainably”.

BoJ Deputy Governor Masayoshi Amamiya said in a speech, “with the economy hit by the impact of COVID-19, what is important now is to maintain the stability in the bond market and stabilize the entire yield curve at a low level.”

“in conducting yield curve control in a sustainable manner, it is important to strike an appropriate balance between maintaining market functioning and controlling interest rates”, he added. BoJ can “find more ways to achieve this balance… although significant fluctuations in interest rates could lead to undesirable consequences, fluctuations within a certain range could have positive effects on the functioning of JGB markets without losing the effects of monetary easing.”

He admitted that because of the possible negative impact, one view in the market is that the Bank finds it difficult to further cut short- and long-term interest rates.” But he emphasized ” it is appropriate to ensure that the Bank can cut them with consideration for the impact on the functioning of financial intermediation.”

“Sharing this recognition with market participants and various economic entities will further enhance the effectiveness of a cut in short- and long-term interest rates as an option for additional easing.”

The impressive data could be distorted by usual volatility for the January to February period. Additionally, the strong growth partly reflected the low base set in 2020. Nevertheless, some analysts still noted the strong rebound in both global and domestic demand.