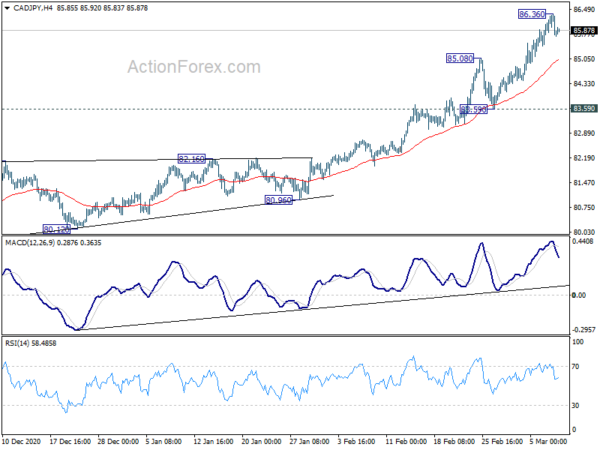 Dollar’s pull back overnight was relatively short-lived as it regains some footing in Asian session today. Sentiments stabilized with US stocks closed higher yesterday, with NASDAQ staged a strong rebound. Treasury yields also retreated mildly. The auction of USD 58B in US 3-year notes was seen as well received, with bid-to-cover ratio at 2.69. But the bigger tests are the 10-year and 30-year auction today and tomorrow.

“Over the past couple of weeks market pricing has implied an expectation of possible increases in the cash rate as early as late next year and then again in 2023”, he acknowledged. But, “this is not an expectation that we share”.

“Our judgement is that we are unlikely to see wages growth consistent with the inflation target before 2024,” he reiterated. “This is the basis for our assessment that the cash rate is very likely to remain at its current level until at least 2024.”

In the Q&A session, Lowe also said he’d be more “comfortable” if Australian Dollar’s exchange rate is lower, “because we need to get the unemployment rate down, inflation back to target and a lower currency would help us get there.” But the currency is not overvalued with commodity prices very high and interest rate differentials stable.

Australia Westpac Consumer Sentiment rose 2.6% to 111.8 in March, from February’s 109.1. It’s now just 0.2 pts below the 10-year high recorded in December. “the main factors driving the Index are improving economic conditions and prospects, both domestically and abroad, particularly as they relate to our labour market.”

Westpac said RBA should be “well pleased” with the economic progress. “It is unlikely to make any changes to its current policy settings or signal any likelihood of changes in the near future.”

RBNZ announced to remove some of the temporary liquidity facilities put in place during the COVID-19 pandemic. Measures include term auction and corporate open market operation (COMO) facilities, which allowed banks to borrow money in exchange for eligible corporate and asset-backed securities.

Head of Financial Markets Vanessa Rayner says, “Financial market conditions have improved significantly since March 2020 when these facilities were introduced and the usage of these special facilities has been very low in the last six months. In addition, the Large Scale Asset Purchase, Term Lending Facility, and Funding for Lending programmes have resulted in a significant increase in system liquidity and a lower cost of funding for banks.”

BoC is generally expected to keep monetary policy unchanged today. Overnight rate will be held at effective lower bound of 0.25%. The size of asset purchases will also stay unchanged at CAD4B per week. There will be no press conference and updated economic projections will not be released until April. So, today’s announce is more likely a non-event than not.

Nevertheless, the central bank should acknowledge the better-than-expected developments since the January meeting. There have been increasing speculations that the central bank will reduce the size to CAD3B per week at the April meeting. We will see if there will be hints of such as move in the policy statement.

Canadian Dollar is currently trading as the strongest for the month, partly helped by strong rally in oil price. CAD/JPY retreated mildly after hitting 86.35 earlier this week. Some consolidations would likely be seen first but overall outlook will stay bullish as long as 83.59 support holds. We’d expect the up trend form 73.80 to extend to 161.8% projection of 74.76 to 81.91 from 77.91 at 89.47 down the road.

France industrial output will be released in European session. US CPI will be featured later in the day.

Intraday bias in AUD/USD is neutral for the moment and outlook is unchanged. Correction from 0.8006 could extend lower. But still, overall outlook will stay bullish as long as 0.7563 support holds. On the upside, break of 0.7837 minor resistance will bring retest of 0.8006 high. However, firm break of 0.7563 will indicate that deeper correction is underway, back towards 0.7413 resistance turned support.