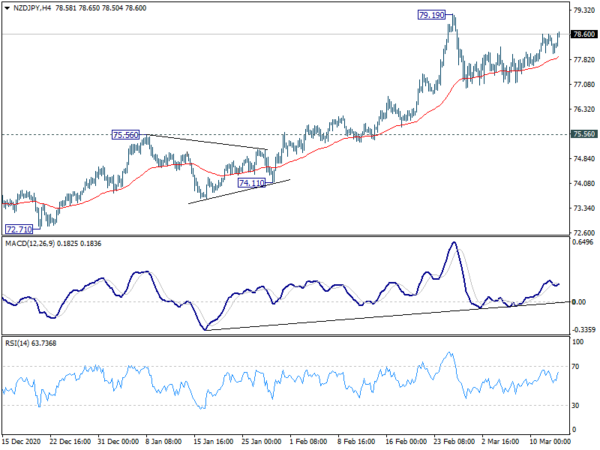 The markets are generally mixed in Asian session today. Strong data from China were shrugged by investors in general. Instead, sentiment is a bit cautious ahead of the highly anticipated FOMC meeting in the middle of the week. Yen is trading as the weakest for now, followed by Aussie and Euro. New Zealand Dollar is paring some of last week’s losses, leading Sterling and Canadian higher.

Technically, Yen looks ready for another round of selloff with USD/JPY now eyeing 109.22 temporary top. Break there will resume recent strong rise from 102.58. Correspondingly, focuses will be on 84.93 resistance in AUD/JPY and 79.19 resistance in NZD/JPY. Break of these levels could trigger more broad based selling.

The National Bureau of Statistics said that economy could show a sharp rebound in Q1 from a year earlier. But there are still imbalances in the recovery and support for consumption is needed. Also, time is needed to see recovery in manufacturing investment. Small firms are facing many difficulties.

RBA Lowe: Business investment yet to click into gear

RBA Governor Philip Lowe reiterated in a speech that economic recovery was “quicker and stronger” than expected. But “we still have a long way to go”, with unemployment rate at 6.4% and economy operating “well short of its capacity”. Inflation and wages growth were also lower than RBA would like. It’s “going to take some time” before we reach our goals.

“one piece of the recovery that is yet to click into gear is business investment”. There was a pick-up late last year, but it’s “still a long way to go” to get back to pre-pandemic level, which was “low by historical standards” already. It’s important to continue and broaden business investment recovery to have a “strong and durable recovery”.

Fed, BoJ and BoE to meet in a busy week

Three central banks will meet this week. Fed, BoJ and BoE are all expected to keep monetary policies unchanged. While Fed will release new economic projections, attention would mainly be on comments regarding recent surge in treasury yields in the long-end. Chair Jerome Powell’s hint on counter-measures like operational twist, or the lack thereof, could spark fresh volatility in the markets.

BoJ’s policy review is also major focus of the week. No dramatic overhaul is expected, but only minor tweaks. One topic to note is the size of ETF purchases. Another topic is change in band allowed for 10-year JGB yield to move around 0%. BoE’s forward guidance is unlikely to change for now, given that the economy is still months away from full reopening.

The economic data flow would also be busy this week. Here are some highlights:

Intraday bias in USD/JPY remains neutral for the moment. As noted before, consolidations should be relatively brief as long as 108.08 minor support holds. On the upside break of 109.22 will resume the rally from 102.58 to long term channel resistance at 110.02 next. On the downside, however, break of 108.08 will bring deeper correction.