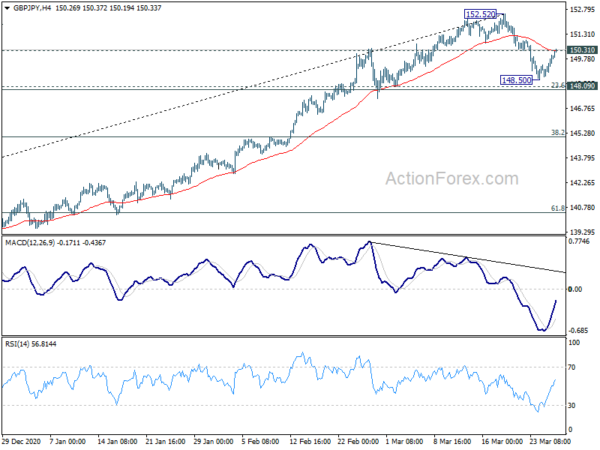 Overall risk sentiments continue to drive the forex markets. Yen, Swiss Franc and Dollar softer following rebound in US and Asian stocks. On the other hand, Australian Dollar is leading commodity currencies and Sterling higher. Still, for the weak, Dollar and Yen remain the biggest gainers while Aussie and Kiwi are the weakest. But the picture could change before weekly close, especially that Sterling might climb up the ladder. Meanwhile, economic data will also be back in focus, with UK retail sales, Germany Ifo business climate and US PCE inflation featured.

Technically, USD/CHF’s break of 0.9374 suggests resumption of rise from 0.8756. Eyes will be on whether USD/JPY would follow and break through 109.35 resistance to resume the rise from 102.58. Sterling is another focus too, as break of 150.31 minor resistance indicates completion of correction from 152.52. Eyes will firstly be on 1.3800 minor resistance in GBP/USD to indicate completion of correction from 1.4240. Also EUR/GBP could be heading back to 0.8532 support and break will resume larger down trend.

Fed Evans: It might be 2024 before raising interest rate

Chicago Fed President Charles Evans said, “I suspect that it might be 2024 before we actually raise the interest rate target.” “Inflation is going to be the real test for whether or not it’s time to lift off.” A burst of inflation for six months is “not nearly enough,” he added. “Patience is something we are going to have to grapple with, probably”. “We should be comfortable with a sustainable 2.5% inflation rate for a year; I don’t really get nervous until it starts creeping up to 3%, and even then, I’d like to know how that’s how that’s being achieved,” Evans said.

Atlanta Fed President Raphael Bostic said “we are always on the lookout for runaway inflation, but right now we are just not seeing it.”

EU von der Leyen: We’re at the start of third wave of pandemic

At a press conference after a virtual summit of EU leaders, European Commission President Ursula von der Leyen said, “we are at the start of the third wave in Europe, and in many European member states, infections are on the rise again, mostly due to the variant B117.” The situation “highlights the importance of a fast and speedy vaccination” on which EU leaders agreed.

She added that the delivery of vaccines for Q2 is promising, and, “we are on track to achieve our goal, that this summer we want to have 70% of the adult population in the European Union vaccinated.”

Separately, ECB Vice President
Luis de Guindos said, “if a high percentage of the population is vaccinated and immunized in the summer, this will have a very positive impact and lead to a second half of the year in which there could be a very strong rebound in activity.”

Later in the day, US will release personal income and spending, as well as PCE inflation. Goods trade balance will also be featured.

In the bigger picture, rise from 123.94 is seen as the third leg of the pattern from 122.75 (2016 low). Next target is 156.59 resistance (2018 high). Sustained break there should confirm long term bullish trend reversal. On the downside, break of 142.71 resistance turned support is needed to be the first sign of completion of the rise from 123.94. Otherwise, outlook will remain bullish even in case of deep pull back.