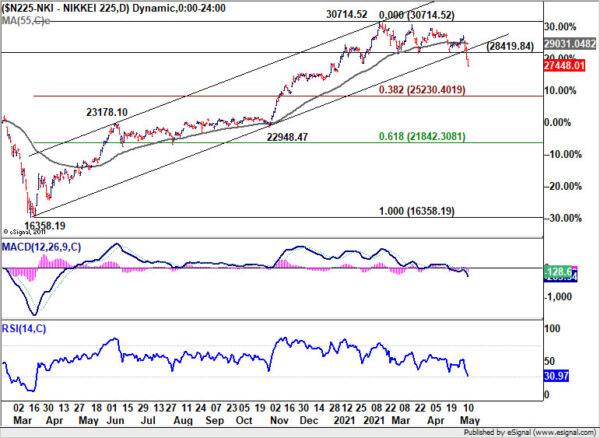 Overall market sentiment stabilizes mildly entering into US session. Major European indexes pared back much of earlier losses, while US futures also turned positive. Even though US PPI showed stronger than expected reading, slightly better than expected jobless claims is support sentiment, in a way. Dollar attempt to extend rebound earlier, but quickly lost momentum again. As for today, Swiss Franc and Kiwi are the strongest one so far. Aussie and Sterling are the weakest.

US initial jobless claims dropped to 473k, continuing claims down to 3.66m

BoJ Kuroda: Important to respond to pandemic’s impact for now

BoJ Governor Haruhiko Kuroda told the parliament today that “economic activity will remain below pre-pandemic levels for the time being.” Also, “risks to the economic outlook are skewed to the downside.” Nevertheless, the economy as a whole is picking up momentum thanks to robust exports and productions.

“We’ll take into account the effects and cost of our policy, and aim to achieve moderate inflation accompanied by growth in corporate profits, jobs and wages,” he said. “It’s important to respond to the pandemic’s impact for the time being” by maintaining the central bank’s ultra-loose monetary policy.

USD/CHF is staying in consolidation from 0.8984 is still in progress and intraday bias remains neutral first. Outlook remains bearish with 0.9163 resistance intact and further decline is expected. On the downside, break of 0.8984 will resume the fall from 0.9471 to retest 0.8756 low. Nevertheless, firm break of 0.9163 will turn bias back to the upside for stronger rebound.