Dollar Back Around Lows as Eurozone PMIs Eyed

The forex markets still generally range bound for the moment. Dollar weakened mildly overnight, but stays above near term lows against other major currencies. Similarly, Yen is also bounded in very tight range. US stocks’ rebound overnight was as positive development for sentiments. Yet, there is no follow through actions in Asia. Though, volatility might come back later today, depending on Eurozone PMIs.

Technically, now attention is back on some Dollar support levels, including 1.2244 temporary top in EUR/USD, 1.4240 resistance in GBP/USD and 0.8959 in USD/CHF. Additionally, eyes are also on 133.42 temporary top in EUR/JPY and 154.80 in GBP/JPY. Break of these levels will indicate the markets back in prior trend of Dollar and Yen selloff.

Nevertheless, analysts saw the drop in inflation as being almost entirely due to the -26.5% plunge in mobile phone charges. That already lowed -0.5% off core CPI.

Japan PMI composite back in contraction, but firms not discouraged by virus resurgence

Usamah Bhatti, Economist at IHS Markit, said: “Flash PMI data indicated that activity at Japanese private sector businesses saw a renewed reduction in May. Output fell at the quickest pace for four months, while the contraction in new business inflows was the fastest since February. Survey members widely attributed the deterioration in business conditions to a resurgence in COVID-19 cases and the reimposition of state of emergency measures.

“Positively, private sector firms were not discouraged from further increasing capacity, as employment levels rose for the fourth consecutive month. This was despite another sharp rise in input costs across the Japanese private sector.

“Disruption to short-term activity is likely to remain until the latest wave of COVID-19 infections passes and restrictions enacted under state of emergency laws are lifted. However, Japanese private sector companies were optimistic that business conditions would improve in the year ahead, albeit to a lesser extent than that seen in April. Positive sentiment stemmed from the expectation that the currently sluggish vaccine rollout would gather pace and aid in the submission of the pandemic, in turn triggering a recovery in demand in both domestic and external markets.”

“Export orders notably continued to improve, reflecting the robust external demand despite concerns of rising COVID-19 cases in the region. In turn, this filtered through to the labour market with employment improving at the fastest pace in the survey’s five-year history.

“The outlook for activity over the coming year remained optimistic, particularly in the service sector in May. Ongoing supply-chain disruptions, however, continued to impact private sector firms, pushing up input cost inflation and thereby output prices.”

New South Wales and Victoria led the state rises, with sales continuing to return in Sydney and Melbourne. A lockdown in Western Australia in April saw a 1.5% fall in that state”.

Intraday bias in USD/CHF remains neutral first. Outlook stays bearish with 0.9092 resistance intact. On the downside, break of 0.8959 will resume the fall from 0.9471 to retest 0.8756 low. However, break of 0.9092 will indicate short term bottoming and turn bias to the upside for stronger rebound. 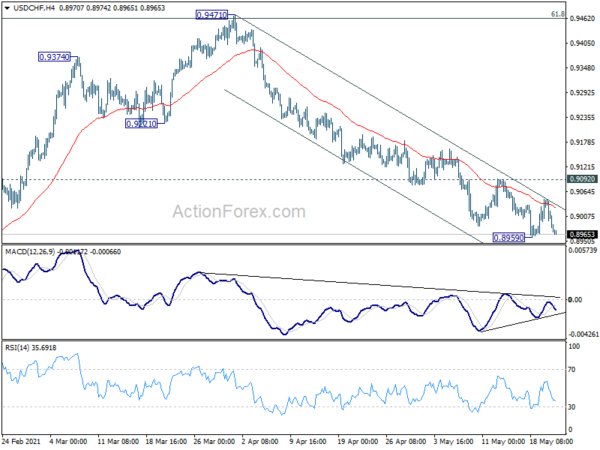 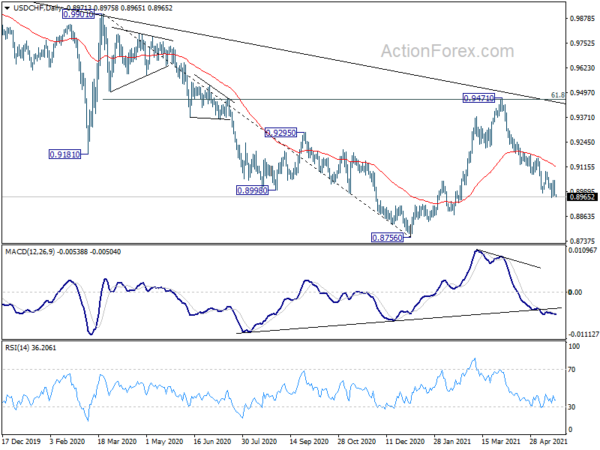