Yen Committed to a Direction, While Others Not… Yet

Overall, the markets in the last full trading week of May was rather mixed. New Zealand Dollar surged initially after hawkish RBNZ. But it failed to extend much gain from there, even though it still ended as the strongest. It looked like Dollar was ready to turn around after strong inflation reading, but it also struggled to close firm. Sterling was the relatively steadier one, as second strongest, on reopening optimism. Yen’s selloff was much clearer on the other hand, while Aussie was dragged down by selling against Kiwi. Swiss Franc was also weak, as third worst performer.

In other markets, US stocks and yields were bounded in established range. DAX attempted to extend record run but lacked follow through momentum. Nikkei staged a strong rebound, but couldn’t recapture 30k handle yet. Gold struggled to get rid of 1900 handle decisively, despite extending recent rise. WTI crude oil failed to break through 67.83 resistance firmly. Bitcoin was extending near term sideway consolidation. We’d see if there would be some more committed moves in June.

New Zealand Dollar ended as the strongest one last week, after RBNZ indicated that it could be ready for a rate hike around Q3 next year. Yet, the sustainability of the rally was rather disappointing. NZD/USD just managed to breach 0.7304 resistance to 0.7315 briefly, and retreated back into familiar range. 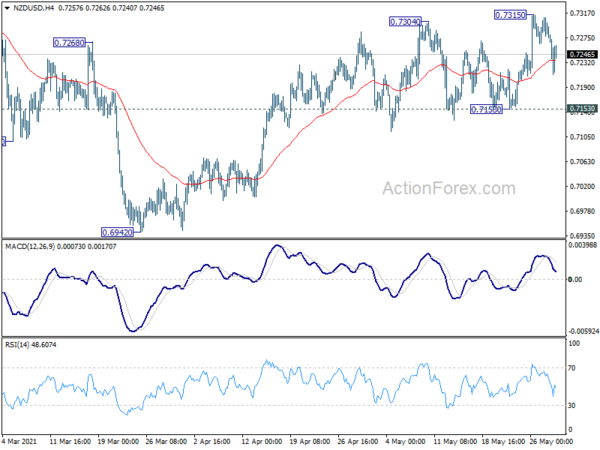 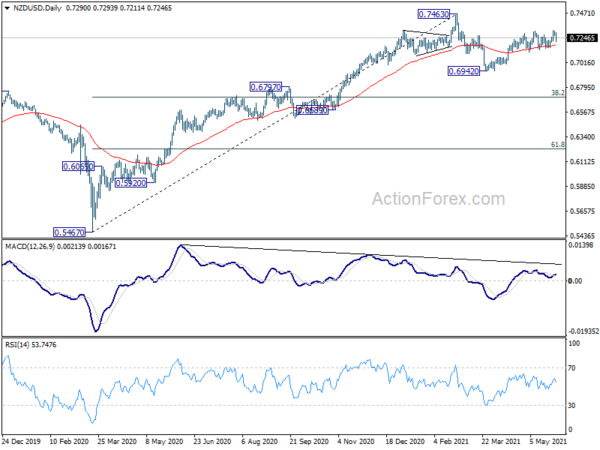 Aussie down but some support lies ahead

AUD/NZD’s decline was much more committed, but that’s more due to Aussie’s weakness, partly due to pull back in iron ore prices, and return to lockdown in Melbourne. But more importantly, RBA has been very clear that the conditions for a rate hike is unlikely to be fulfilled until 2024 at the earliest. We’re not expecting RBA to change this guidance in the upcoming meeting this week. Fall from 1.0944 is seen as the third leg of the pattern from 1.1042. As long as 1.0702 support turned resistance holds. AUD/NZD would be targeting 1.0415 support next. 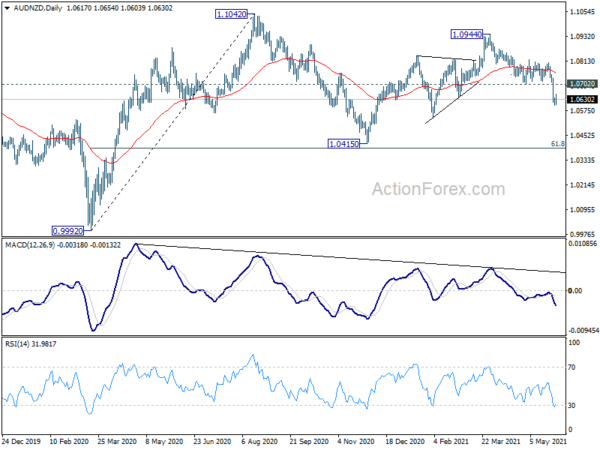