Dollar trades slightly higher in early US session on much better than expected ADP private job data. Though, upside is so far limited, as traders remain cautious ahead of tomorrow’s non-farm payrolls report. Sterling is following as the second strongest for today, then Yen. On the other hand, commodity currencies are generally lower, as led by both Australian and New Zealand Dollars.

Technically, in spite of current recovery, there is no confirmation of a turnaround in Dollar’s bearish outlook. The key near term levels include 1.4090 support in GBP/USD, 0.7673 support in AUD/USD, 0.9046 resistance in USD/CHF and 1.2201 resistance in USD/CAD. Dollar’s selloff could come back any time as long as these levels hold.

US initial jobless claims dropped to 385k, continuing claims ticked up to 3.77m

US ADP jobs grew 978k, upstick in companies of all sizes

“Private payrolls showed a marked improvement from recent months and the strongest gain since the early days of the recovery,” said Nela Richardson, chief economist, ADP. “While goods producers grew at a steady pace, it is service providers that accounted for the lion’s share of the gains, far outpacing the monthly average in the last six months. Companies of all sizes experienced an uptick in job growth, reflecting the improving nature of the pandemic and economy.”

Tim Moore, Economics Director at IHS Markit: “UK service providers reported the strongest rise in activity for nearly a quarter-century during May as the roll back of pandemic restrictions unleashed pent up business and consumer spending. The latest survey results set the scene for an eye-popping rate of UK GDP growth in the second quarter of 2021, led by the reopening of customer-facing parts of the economy after winter lockdowns.”

Chris Williamson, Chief Business Economist at IHS Markit said: “The eurozone’s vast service sector sprang back into life in May, commencing a solid recovery that looks likely to be sustained throughout the summer… The service sector revival accompanies a booming manufacturing sector, meaning GDP should rise strongly in the second quarter. With a survey record build-up of work-in-hand to be followed by the further loosening of covid restrictions in the coming months, growth is likely to be even more impressive in the third quarter.”

Wang Zhe, Senior Economist at Caixin Insight Group said: “To sum up, the expansion in manufacturing and services maintained its momentum as both supply and demand expanded. Overseas demand was generally good, but service exports were affected by the pandemic. The job market continued to improve. In May, services recovered faster than manufacturing. Entrepreneurs were confident about the economic outlook. Inflation remained a crucial concern as the price gauges in manufacturing and services both rose last month.

Australia goods and services exports rose 3% mom to AUD 39.8B in April. Imports dropped -3% to AUD 31.7B. Trade surplus rose from AUD 2.2B to AUD 8.0B, matched expectations. Retail sales rose 1.1% mom, unchanged from preliminary results.

AiG Performance of Construction Index dropped -0.8 pts to 58.3, “largely maintaining the strong pace of post-2020 recovery following on from a record high in March“.

EUR/USD drops mildly today but intraday bias remains neutral first. On the upside, above 1.2265 will resume the rise from 1.1703 to retest 1.2348 high. On the downside, firm break of 1.1985 support should confirm that consolidation pattern from 1.2348 has started the third leg. Deeper fall would then be seen back to 1.1703 support. 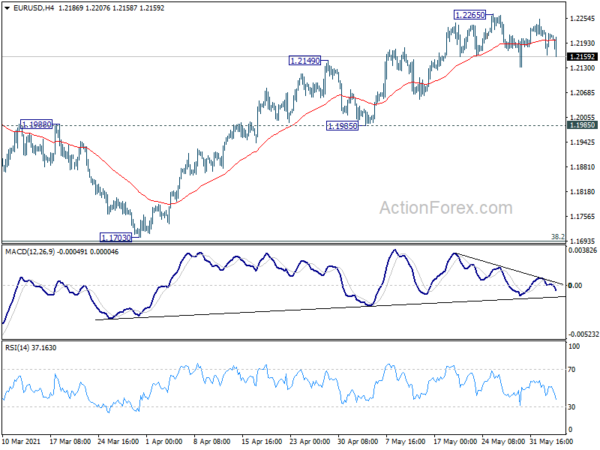 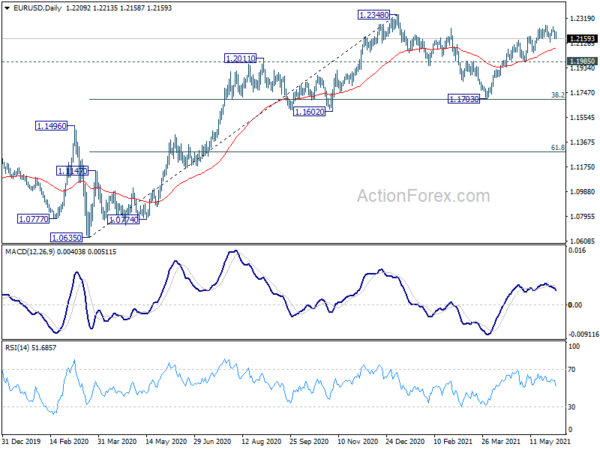