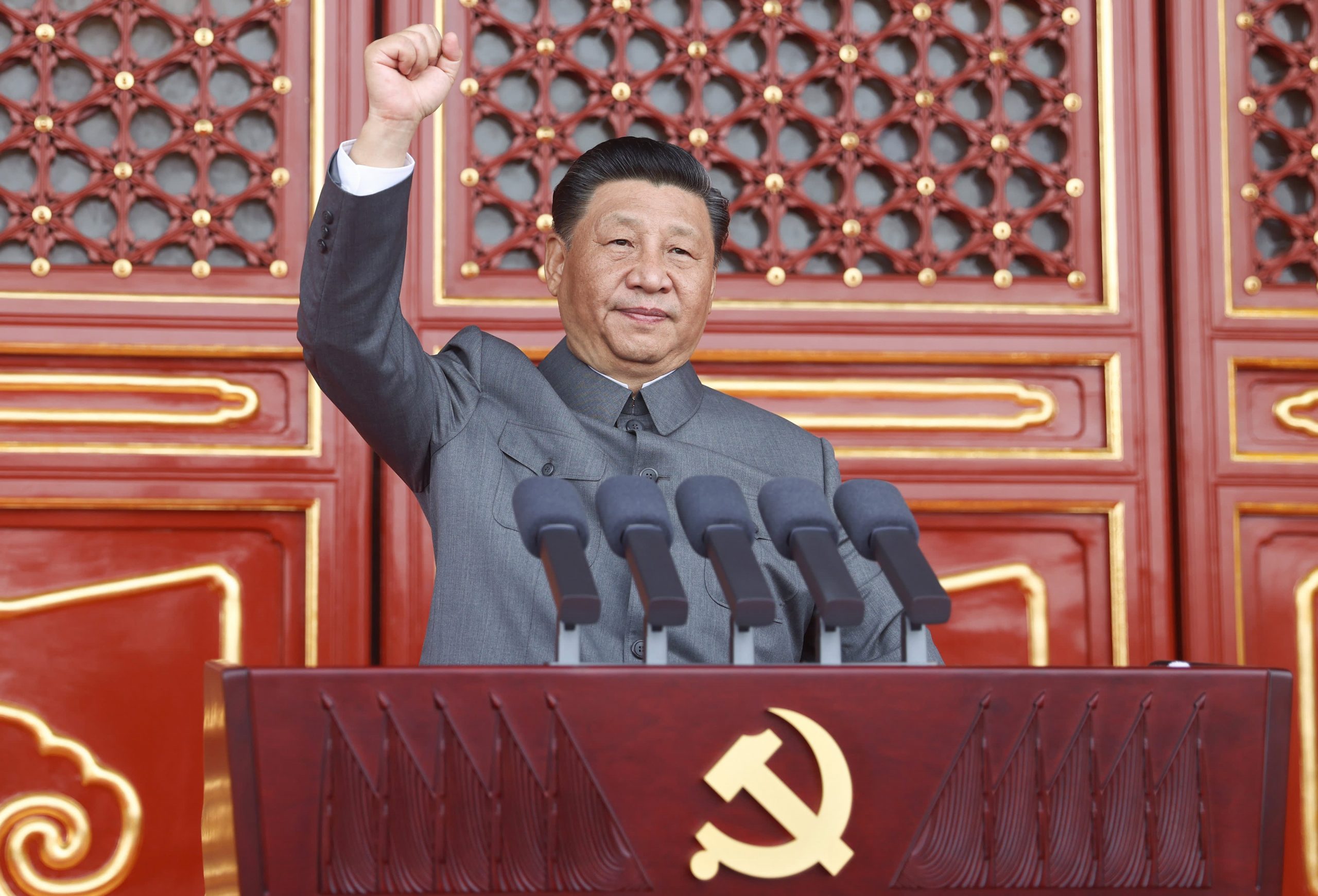 Xi Jinping, general secretary of the Communist Party of China CPC Central Committee, Chinese president and chairman of the Central Military Commission, delivers an important speech at a ceremony marking the 100th anniversary of the founding of the CPC in Beijing, capital of China, July 1, 2021.

BEIJING — One hundred years since the founding of China’s Communist Party — which it says was born out of a secret meeting on a boat — President Xi Jinping now stands a chance to lead the country to becoming the world’s largest economy.

Achieving that level of growth will require China to propel itself past looming challenges: the so-called middle income trap, lack of innovation and a rapidly aging population. That’s according to analysts, mostly looking in from abroad.

For Xi, his eyes are already on the next hundred years, and an unfulfilled dream of the “great rejuvenation of the Chinese nation” which he reiterated at centenary celebrations for the party this week. Xi also holds the top political position of the general secretary of the ruling Communist Party’s central committee and heads China’s military commission.

“He has iron in his soul, more than [former President] Hu Jintao, who ascended the ranks without experiencing the trials and tribulations that Xi endured,” the late founder of modern Singapore, Lee Kuan Yew, told American foreign policy experts Graham Allison and Robert D. Blackwill in 2012, just before Xi officially became president.

The 68-year-old is the son of an early Communist leader who rose to vice premier, then suffered political persecution for 16 years under the party’s dominating founder Mao Zedong.

Xi himself spent about seven years working in the countryside as a teenager during the Cultural Revolution, which Mao used to regain his power and eliminate his political rivals.

Xi had a stint as a village party secretary, studied at Tsinghua University’s chemical engineering school, then worked his way up through government positions across the country, notably in Fujian province and Shanghai, according to state media.

Meanwhile, the architect of China’s economic reforms, Deng Xiaoping, spearheaded an economic restructuring that allowed individuals and even foreign businesses to take ownership from the state. Many credit those changes for helping lift hundreds of millions of Chinese out of poverty, and turning China into an economy that now ranks second only to the U.S.

The key factors that really drove China’s phenomenal growth have either ended or declined in performance.

“When you think about the centenary of the party, you think not so much about the party as about the economic progress of the last 30 years,” said Dmitri V. Trenin, director of the Carnegie Moscow Center.

“Most people here bank on a continuing progress and even higher achievements in the years ahead. Clearly history doesn’t work that way,” he said. “There are successes. There are also failures.”

By 2007, Xi was a member of China’s top leadership group and president of the central school for training Communist party leaders. He officially became president in 2013, and launched a sweeping anti-corruption campaign.

In consolidating his power, Xi abolished term limits in 2018, while stepping up the party’s role in private business.

However, China’s economic growth began to slow in the last several years, albeit remaining at relatively high rates compared with other major economies.

“The key factors that really drove China’s phenomenal growth have either ended or declined in performance,” said Tony Saich, professor at the Harvard Kennedy School of Government.

He pointed to China’s aging population and the inability to keep relying on foreign direct investment.

Xi’s challenge is how to “get financial resources to those parts of the economy that are more productive,” said Saich, who authored “From Rebel to Ruler: One Hundred Years of the Chinese Communist Party.”

Privately run businesses contribute to most of China’s growth and jobs, while the financial system is dominated by state-owned banks that prefer to lend to state-owned enterprises. Beijing frequently mentions the financing problem in policy statements, although it’s less clear how significant the moves are in practice.

Meanwhile, as risks rise from tensions with trading partners like the U.S., Xi has revamped calls for boosting domestic consumption and building up technology at home.

That kind of innovation will be harder to achieve than GDP goals of the past, said Yuen Yuen Ang, associate professor of political science at the University of Michigan. Innovation is “inherently uncertain and cannot be planned from the top.”

But such new drivers of growth will be critical for the long term.

“The most challenging task for China’s leadership is to avoid the middle-income trap,” Bonnie Glaser, director of the Asia program at the German Marshall Fund of the U.S., said in an email. “If its governance system fails to achieve that goal, there could be domestic instability.”

She was referring to the theory that once a country has grown rapidly due to a large force of cheap labor, its economy could stagnate and fail to sustain higher wages for workers, and greater growth.

There’s always danger when there’s a very powerful authoritarian figure, because when he chooses to use power it could have very detrimental effects on the country.

Author of “What the U.S. can learn from China.”

Xi’s individual association with policy particularly raises the stakes for ensuring growth, Rana Mitter, professor of the history and politics of modern China at the University of Oxford, said in an email.

The Chinese leader has labeled “Xi Thought” on directives ranging from “socialism with Chinese characteristics” to “diplomacy.” It’s common for official documents to start with the line: “Under the strong leadership of the Communist Party of China Central Committee with Comrade Xi Jinping at its core.”

Questions about the future

Next year, the ruling party will hold its 20th National Party Congress which will provide signals on whether Xi will hold onto power beyond the two terms of his recent predecessors.

“There’s always danger when there’s a very powerful authoritarian figure, because when he chooses to use power it could have very detrimental effects on the country,” said Ann Lee, a former professor at Peking University and author of “What the U.S. can learn from China.”

“Thus far, since he’s taken power,” she said, “I don’t think he’s used it to necessarily enhance his own wealth for selfish reasons, but more for nation-building at this point.”

Within China, disparities between central and local government slow policy implementation, while some question the leadership’s direction.

Among the country’s academic thinkers, there’s a rethinking of the Chinese experience outside of the political revolution, and a desire to combine some kind of democracy, said David Ownby, professor of history at the Université de Montréal and founder of “Reading the China Dream,” a website that translates articles from Chinese intellectuals.

But for most people in China, their rise in prosperity over just a generation or two is sufficient for now. In many respects, the party under Xi has adeptly responded to and controlled majority opinion, while using centralized power to swiftly direct resources to containing the pandemic, for example.

Analysts widely expect China to overtake the U.S. and become the world’s largest economy in the next decade, if not sooner.

Chinese leaders “may become their own worst enemies if they turn too self-confident and develop hubris,” Trenin said. “They are not there yet.”

Correction: This story has been updated to reflect that Yuen Yuen Ang is associate professor of political science at the University of Michigan.