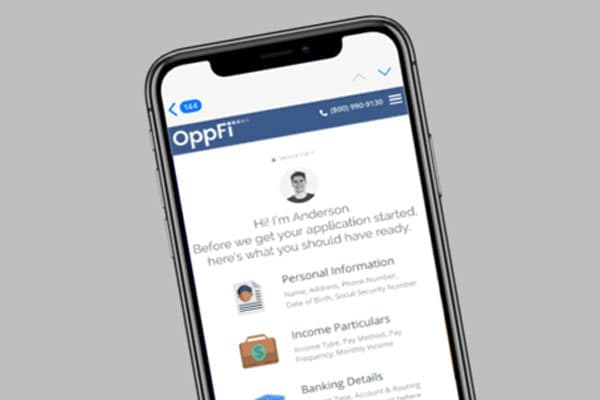 OppFi’s target customer is the “median U.S. consumer” who earns about $50,000 annually and has a bank account, Kaplan said.

Artificial intelligence-powered OppFi aims to offer accessible financial services to those who lack traditional options. So far, it primarily offers installment loans facilitated through banks. Revenue this year is projected to be $418 million after seeing consistent growth in the last five years.

Shares of OppFi, short for Opportunity Financial, rose about 2% in their market debut Wednesday after the company completed its merger with FG New America Acquisition Corp., a special purpose acquisition company.

“We were not going to be like any SPAC,” FG New America Chairman Joe Moglia said Wednesday on “Squawk Box,” in an interview with Kaplan. Moglia was also formerly chairman of TD Ameritrade. “It was very important for us to partner with a company that we really believe had a real plan, that they could execute with a really strong management team.”

Due to Covid, many Americans chose saving over spending due to pandemic-induced fears, shutdowns and increasing costs. People, however, also saw more money in their bank accounts after receiving federal stimulus checks.

“The stimulus payments were short-term help,” Kaplan said. “The reality is savings is a problem in this country. Even with this inflationary environment and incomes are up a little bit, the major costs of living are still going up at a faster rate.” He said, “Our customers have a couple hundred dollars in their bank account.”

There are 150 million Americans, some 45% of the nation’s population, with less than $1,000 of savings, Kaplan said, adding those people who also have poor credit can feel “completely abandoned” when it comes to paying larger or sudden expenses.

Nearly 63% of respondents in an April survey conducted by real estate company Clever said they were living paycheck to paycheck and were unable to save during the pandemic. A survey from Bankrate, which was published in January, showed that fewer than 40% of Americans could pay for an unexpected $1,000 expense from their savings. People are still more optimistic that this year will be better for their finances, the report also found.

Kaplan expects people to seek more credit access services to pay for their unexpected expenses, particularly once mortgage payments and student loan payments pick back up.

“I think going into the future, our prospects are equally as good but we want to help customers get out of the problem,” Kaplan said. “It’s not just about providing credit access products because they can’t build savings today.”

He said it’s also about “reducing their cost of borrowing, and helping them build savings so that they can get out of having to borrow for any emergency expenses that pops up beyond what they budgeted for.”