The rapid growth the U.S. economy has seen is about to hit a wall 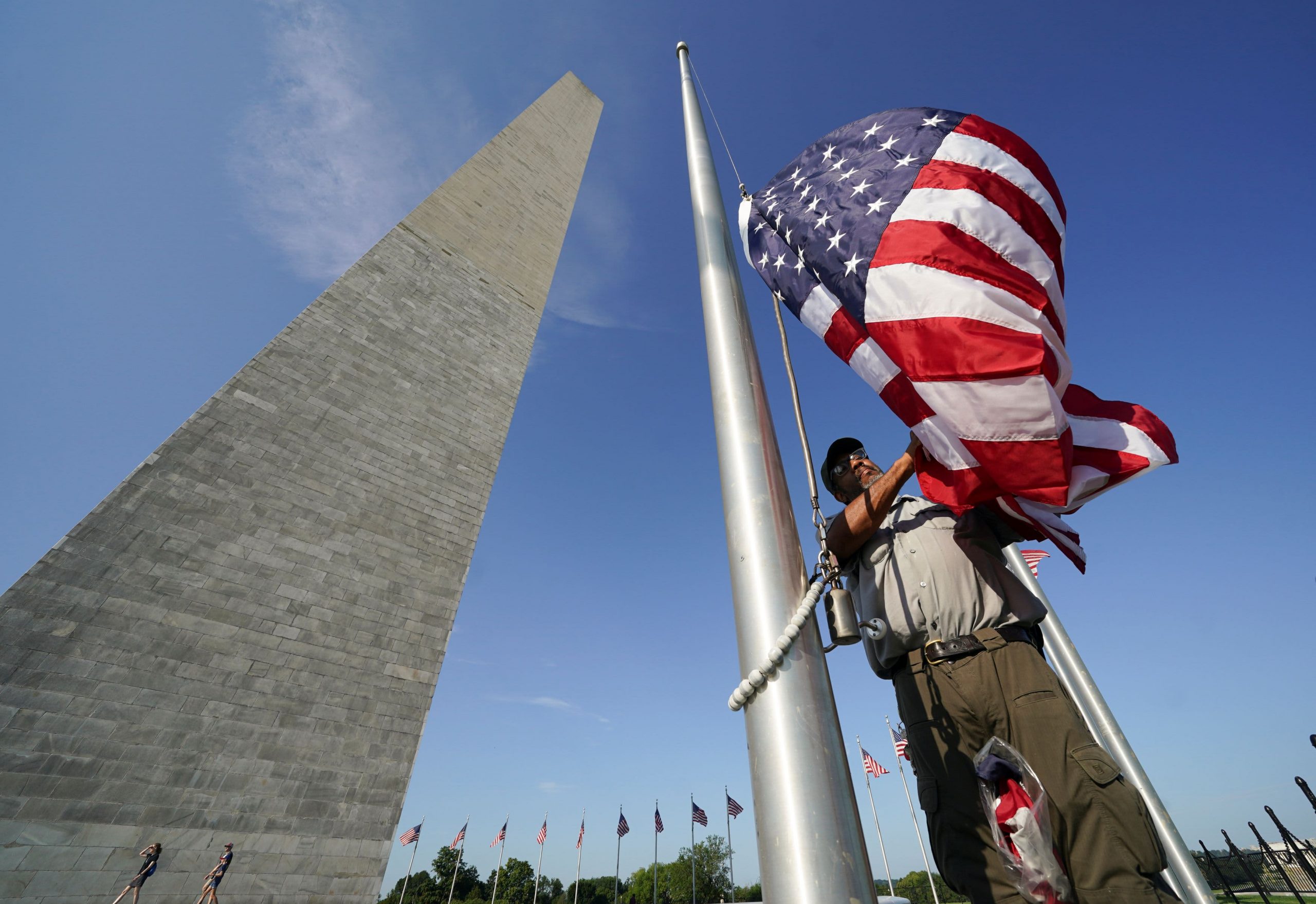 A National Park Service worker replaces a flag at the Washington Monument which reopened today following a six month closure due to COVID-19 safety measures, in Washington U.S., July 14, 2021.

The U.S. economy is expected to post another roaring growth spurt in the second quarter, before a slow and steady dose of reality starts to sink in.

Gross domestic product is projected to accelerate 9.2% for the April-to-June period, according to a FactSet survey. The Commerce Department will release its first estimate for second-quarter GDP on Thursday.

In a pre-pandemic world, that would have put annualized growth at its fastest level since the second quarter of 1983. However, the current circumstances and the outsized policy response they generated make this merely the third straight quarter of GDP that sits well above the post-Great Recession trend.

Things are about to change, however.

The economy is creeping back toward normal, the open checkbook from Congress is about to get tighter, and millions of sidelined American workers will be returning to their jobs. That means a gradual reversion to the mean for an economy more used to growing closer to 2% than the much stronger levels it has turned in during the reopening.

“Growth has peaked, the economy will slow a bit in the second half of this year, then much more noticeably in the first half of 2022 as fiscal support fades,” said Mark Zandi, chief economist at Moody’s Analytics. “The contours of growth are going to be shaped largely by fiscal policy over the next 18 months. The tailwind just blows less strongly, and may stop altogether by this time next year.”

It’s been a long road getting here, but the economy has gotten very close to its pre-pandemic self.

In fact, according to a running gauge that Jefferies keeps, overall output is at 98.6% of its “normal” level before Covid-19 turned everything upside down. The firm uses a slew of indicators to measure then versus now, and finds that while some areas such as employment and air travel are lagging, retail and housing have helped push overall activity to just below the 2019 level, at 98.6%.

“When I look holistically at household income dynamics and balance sheets, I see a very, very positive situation, very healthy fundamentals, and it’s hard to be pessimistic on the outlook,” said Aneta Markowska, chief financial economist at Jefferies.

Indeed, household net worth totaled $136.9 trillion at the end of the first quarter, a 16% increase from its 2019 level, according to the Federal Reserve. At the same time, household debt payments compared with disposable personal income fell to 8.2%, a record low going back to 1980.

But much of that net worth has been driven by increases in financial assets such as stocks, and personal income has swelled due to government stimulus payments that are slowing and eventually will stop.

Keeping up such a rapid pace of growth will be difficult in an economy that has long been held back by an aging population and lackluster productivity. Those issues will be exacerbated by dwindling policy support as well as an ongoing battle against Covid-19 and its variants, though few economists expect widespread lockdowns and the plunge in activity that happened in early to mid-2020.

“What we see is an economy growing robustly above trend albeit at a slower pace through 2023,” said Joseph Brusuelas, chief economist at consulting firm RSM. “Absent any productivity-enhancing policy support, we eventually will move back to trend because there’s not much we can do about the demographic headwinds, which will eventually drag growth back to the long-term trend.”

But there also are shorter-term headwinds that should temper those gaudy growth numbers.

An aggressive spurt of inflation brought on by supply constraints and huge demand related to the economic reopening will hit output. While many economists, including those at the Federal Reserve, are willing to write off the inflation as temporary with soaring used auto and truck prices contributing a large component, officials including Treasury Secretary Janet Yellen warned that the price increases are likely to continue for at least several months.