Dollar Rally in Force as Focus Turns to CPI

Dollar’s rally continues in Asian session today, in particular against Euro, Swiss Franc and Yen. Though, cautious comments from Fed Evans is not giving any particular boost elsewhere. Commodity currencies are still resilient, as supported by overall optimistic sentiment, with DOW closing at new record high. Main focus will now turn to US consumer inflation data.

Technically, USD/JPY’s break of 110.58 resistance is a positive development for the Dollar. Yet, we’d still need to see break of 1.3766 support in GBP/USD, 0.7288 low in AUD/USD, and 1.2605 resistance in USD/CAD, to confirm Dollar’s underlying bullish momentum.

Chicago Fed President Charles Evans sounded more cautious than some of his FOMC colleagues in the topic of tapering. He acknowledged that the US is “making progress” and “well on our way” to substantial further progress. But, “I’d like to see a few more employment reports,” before making the decision.

“Everybody is wondering about September, November, December, January,” as possible dates to start scaling back asset purchases, Evans said. “I don’t think that one meeting on either side is going to have an important effect.”

“We should not preemptively end a strong improvement in the labor market because somebody is getting nervous about inflation,” he said. “I am going to be very regretful if we sort of claim victory on averaging 2% and then find ourselves in 2023 with about a 1.8% inflation rate … That would be a challenge for our long run framework.”

Australia Westpac-MI consumer sentiment dropped -4.4% to 104.1 in August, down from July’s 108.8. It’s now at the lowest point in a year, but was well above the pandemic trough, and even above the levels over the twelve months prior to the pandemic.

Westpac said: “The virus situation locally is clearly troubling, but consumers appear reasonably confident that it will come back under control, and that once it does, the economy will see a return to robust growth.”

Westpac expects RBA to leave policy unchanged at next meeting on September 7. It added, “given its decision to sit pat in August despite a sharp deterioration to the near-term outlook, the hurdle for RBA action looks to be very high”. It also maintain the forecast that RBA would start raising the case rate in Q1 of 2023.

Germany CPI final will be released in European session. US CPI will be the major focuses later in the day.

USD/JPY’s rally continues today and hits as high as 110.67 so far. The break of 110.58 resistance should confirm that corrective fall from 111.65 has completed with three waves down to 108.71. Intraday bias stays on the upside for retesting 111.65 high. On the downside, though, below 110.01 minor support will mix up the near term outlook and turn intraday bias neutral first. 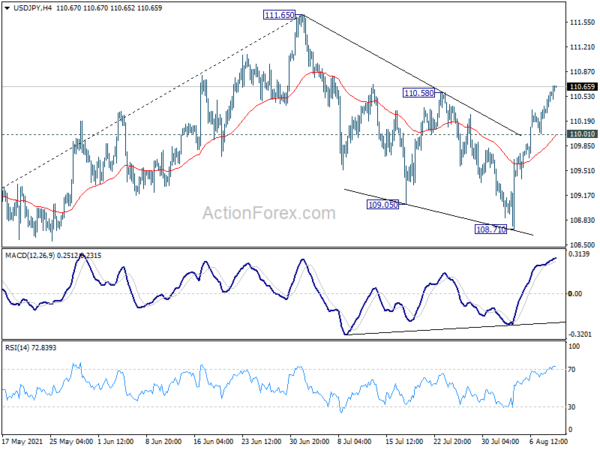 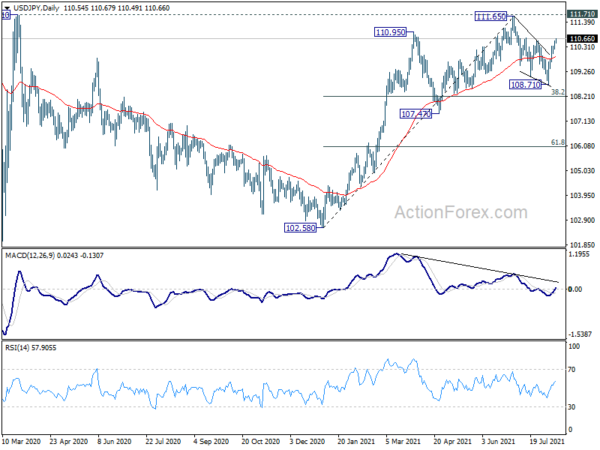