Dollar Regains Some Ground after PPI and Jobless Claims, Staying in Range

Dollar is trying to regain some ground in early US session after stronger than expected PPI. Both initial and continuing jobless claims also continued to trend lower. The greenback is followed by Euro and Yen while Aussie and Kiwi are softest. Though, major pairs and crosses are staying inside yesterday’s range for now. As for the week, Canadian Dollar is currently the strongest, , followed by Kiwi and Dollar. Swiss Franc, Euro and Yen are the weakest.

Technically, it looks like Dollar has just turned into sideway trading with yesterday’s retreat. For now, more sideway trading is likely. We’ll keep an eye on 110.01 minor support in USD/JPY and 1.1768 minor resistance in EUR/USD. The greenback’s rally would be in favor to resume as long as these levels holds. But break will indicate that deeper pull back is underway.

US initial jobless claims dropped to 375k, above expectation

Fed Daly: Talking about tapering later this year or early next year is where I’m at

San Francisco Fed President said in an FT interview that she remained “very optimistic and positive”. She added, “it’s appropriate to start discussing dialling back the level of accommodation that we’re giving the economy on a regular basis

“The starting point for that is of course asset purchases,” she said. “Talking about potentially tapering those later this year or early next year is where I’m at.”

On the employment markets, she said “we’re really adding enough jobs to see that we’re making progress towards our full employment goal.” While “we’re not there yet… we’re chipping away at the hole that was dug by Covid.”

For Q2 as a whole, GDP grew 4.8% qoq, still -4.4% below the pre-pandemic level in Q4, 2019. ONS said, “there were increases in nearly all main components of expenditure apart from “trade”, with the largest contribution from household consumption”.

Fitch affirms Japan rating at A with negative outlook

Fitch affirmed Japan’s Long-Term Foreign-Currency Issuer Default Rating (IDR) at ‘A’ with a “negative” outlook. The ratings “balance the strengths of an advanced and wealthy economy, with correspondingly robust governance standards and public institutions, against weak medium-term growth prospects and very high public debt”. The negative outlook reflected “uncertainty about the medium-term macroeconomic and fiscal outlook from the continuing pandemic”.

USD/JPY is staying in consolidation from 110.79 temporary top and intraday bias remains neutral. Outlook is unchanged that corrective fall from 111.65 should have completed with three waves down to 108.71. Another rise is in favor with 110.01 support intact. Break of 110.79 will turn bias to the upside for retesting 111.65 high. However, break of 110.01 will dampen this bullish view, and turn bias to the downside for 108.71 support. 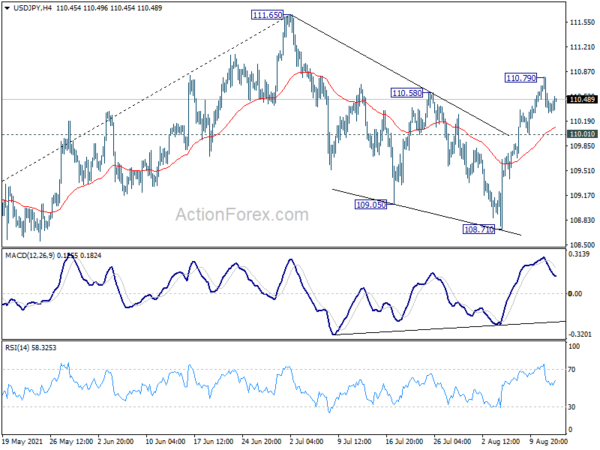 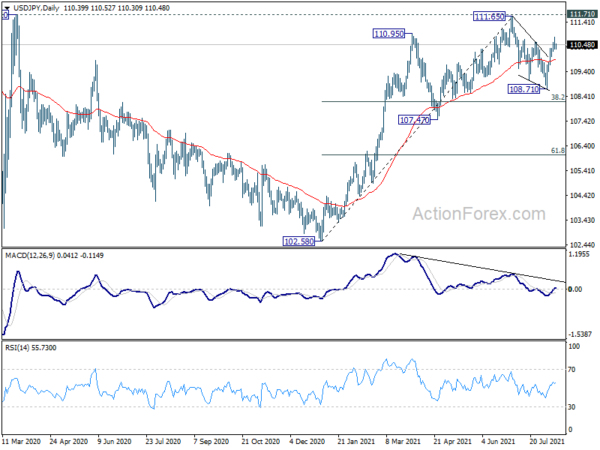