Euro and Swiss Franc rise broadly as the markets are approaching the weekly close. On the other hand, Canadian Dollar is reversing some of this week’s gains, while Dollar is following as second weakest for the day. As for the week, the Loonie is still the strongest, followed by Kiwi Swiss Franc is the weakest followed by Sterling. But there are still a few more hours to change the picture.

Technically, one major focus for the rest of the day and early next week is EUR/USD. Break of 1.1768 minor resistance will firstly indicate short term bottoming. More importantly, the could be an early sign of near term reversal, after drawing support from 1.1703 key near term support level. We’ll see if EUR/USD’s rebound would extend.

However, the position of negative comments (51.4%) still remained higher than positive ones (48.6%). Increased domestic and overseas orders was the common factor for positive comments. In contrast, tight labor market, supply chain issues and raw material costs were the negatives.

BNZ Senior Economist, Craig Ebert stated that “while New Zealand’s PMI is doing exceptionally well, we are also conscious of the headwinds happening for global manufacturing. This is on account of the resurgence of COVID19 in its delta strain.”

EUR/USD rebounds notably today and immediate focus is now on 1.1768 minor resistance. Firm break there will confirm short term bottoming and bring stronger rise to 1.1907 resistance. As by then, EUR/USD should have draw strong support from support from 1.1602/1703 support zone. Firm break of 1.1907 should indicate near term bullish reversal. Nevertheless, on the downside, sustained break of 1.1602 will argue that it’s already reversing the trend from 1.1603, and target 61.8% retracement of 1.1603 to 1.2348 at 1.1289. 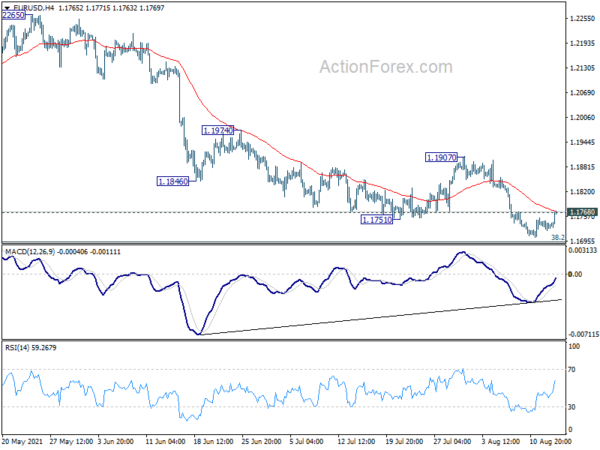 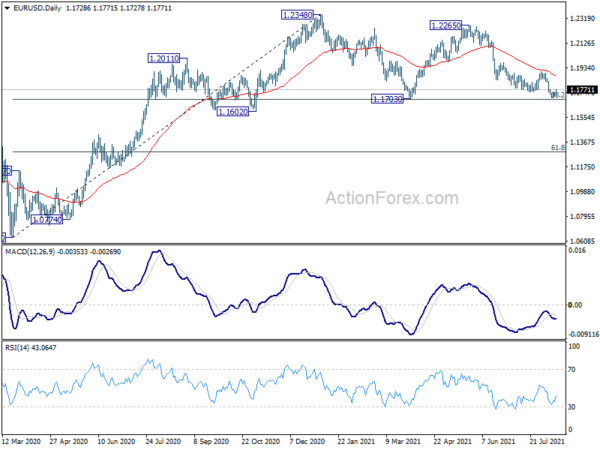