It’s all about the consumers. After slowing core inflation and sharp deterioration in sentiment, Dollar took a steep dive towards the end of the week. Markets are suddenly less sure about a tapering announcement by Fed in September, not to mention anything concrete from Jackson Hole symposium later in the week. The greenback ended the week only slightly between than Sterling and Swiss Franc. The development suggests more downside in Dollar for the initial part of this week at least.

On the other hand, Yen rebounded strongly following the slide in treasury yields, even though US stocks extended the record runs. New Zealand Dollar follows as the second best, awaiting RBNZ rate hike this week. Canadian Dollar was the third winner. Euro and Aussie ended the week mixed.

Dollar’s rally firstly slowed after decline in core CPI in July from 4.5% yoy to 4.3% yoy, while headline CPI was unchanged at 5.4% yoy. The data added to the view that current inflation is “transitory”, or at least, it’s not accelerating for now.

Then, heavy selling was triggered on Friday by poor U of Michigan economic sentiment, which tumbled sharply from 81.2 to 70.2. That’s the lowest level since 2011. More importantly, the large scale decline was only exceeded by six occasions on record, all connected to sudden negative changes in the economy. While it’s just one data point, it raised concern over the course of the economy ahead with surging spread of Delta variant in the back ground.

Some Fed officials like Esther George, Robert Kaplan, Eric Rosengren were affirmative on announcing tapering in September, on condition of further strong improvement in job markets. But some like, Thomas Barkin and Raphael Bostic sounded cautious, probably thinking about making the decision in fall. Doves like Charles Evans would like to see a few more job report before deciding. While Mary Daly is expecting tapering later this year or early next.

The break of 1.420 resistance would come likely come when Fed shows more confidence with a concrete plan of tapering. In that case, we’d likely see TNX head back towards 1.765 high as talks of a rate hike late next year heat up. 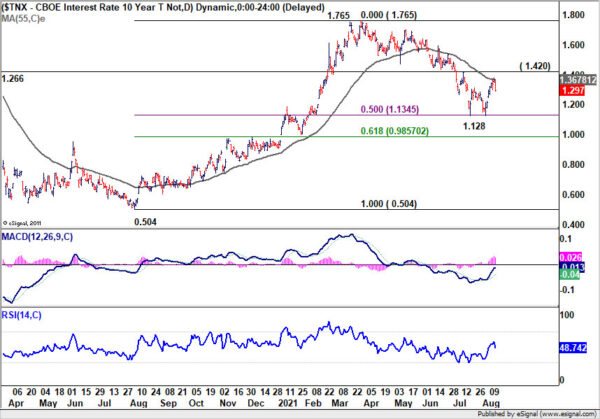 The fibonacci level at 94.46 will be important to determine the underlying trend. Strong break there would indicate that DXY is already in a medium term up trend, that would extend through 61.8% retracement at 97.72. However, failure there and (early) break of 91.78 support could bring another attempt below 90 handle before taking a committed direction. 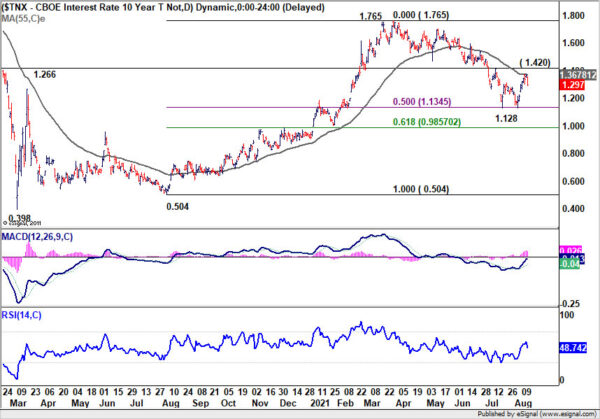 Gold rebounded after initial dive, but 1800 could cap upside

The initial selloff in Gold was brief, even though steep, mainly due to ultra thin liquidity. Subsequent rebound was actually quite impressive, riding on Dollar’s weakness. Further rise would be mildly in favor as long as 1741.44 support holds. But 55 day EMA (now at 1800.05) which is close to 1800 handle) could cap upside, and bring another fall to take on 1676.65 key support. However, sustained break of the 55 day EMA would raise the odds of stronger rise back to 1916.30 resistance. That could be used to double-confirm DXY’s break of 91.78 support if it happens. 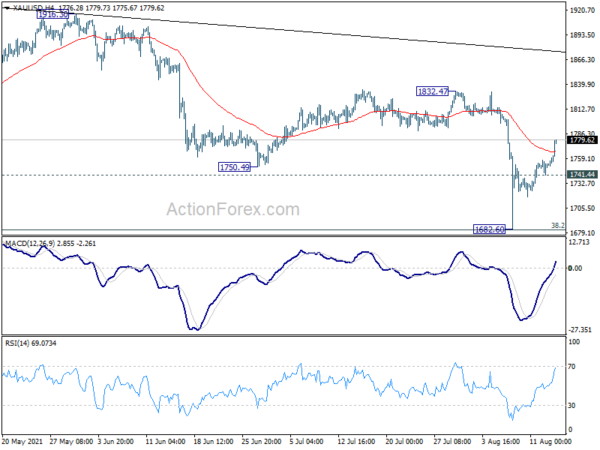 Yen rebounded against Aussie and Kiwi

Yen’s rebound last week was rather broad-based, including against commodity currencies. AUD/JPY was rejected by 91.64 resistance, then reversed to close at 80.74. Immediate focus is now on 80.69 minor support this week. Firm break there will argue that AUD/JPY is at least in another falling leg inside the consolidation pattern from 79.82. Deeper fall could be seen back to retest this low. 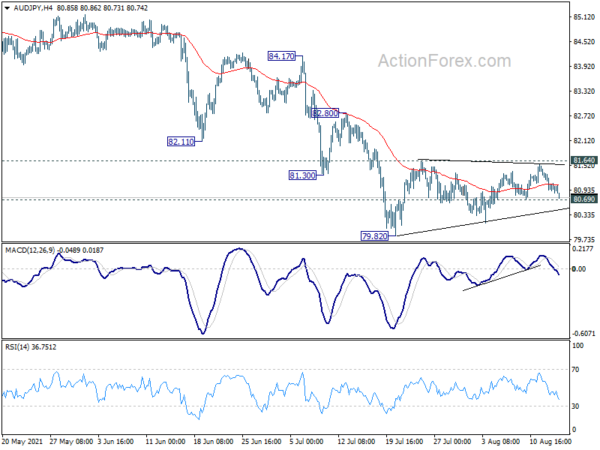 NZD/JPY’s outlook was relatively more bullish than AUD/JPY, as the rebound to 77.91 was stronger. Yet, it also retreated notably after losing upside momentum, as seen in 4 hour MACD. Break of 76.87 minor support would also argue that corrective pattern from 75.25 has completed, and bring deeper fall, with prospect of retesting this low. 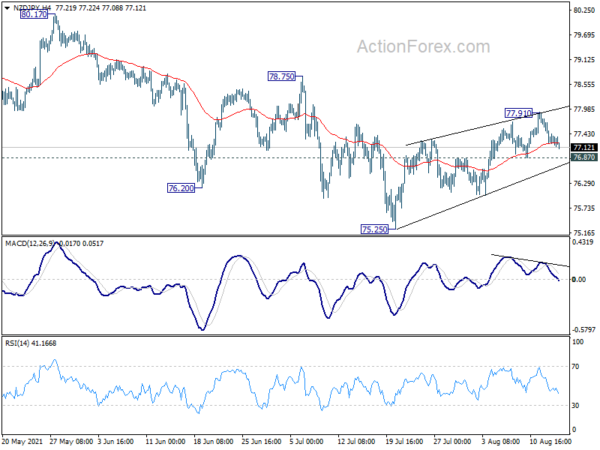 Some upside risks for NZD/USD on RBNZ hike

At the same time, the Kiwi is have some upside risks this week, on expectation of an RBNZ rate hike from 0.25% to 0.50%. NZD/USD could be popped through 0.7104 resistance should RBNZ delivers. That would affirm the case that corrective pattern from 0.7463 has completed shallower than expected at 0.6879. That could also come with some upside acceleration, to near term trend line resistance first (now at 0.7198), and then to 0.7315 resistance.

For now, it’s unsure whether, if the bullish scenario realizes, that would come with a stronger rebound in NZD/JPY, or forces Dollar lower against commodity currencies. 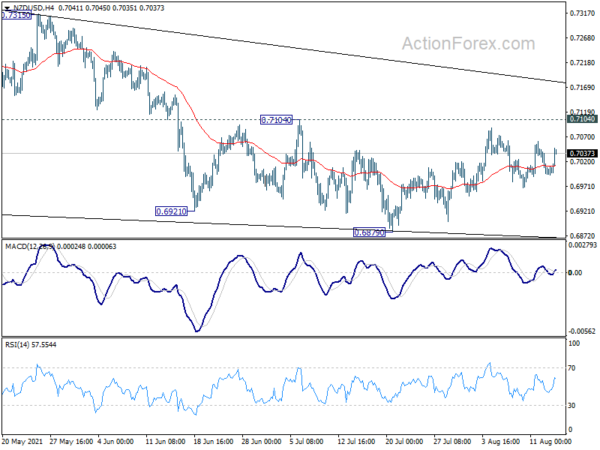 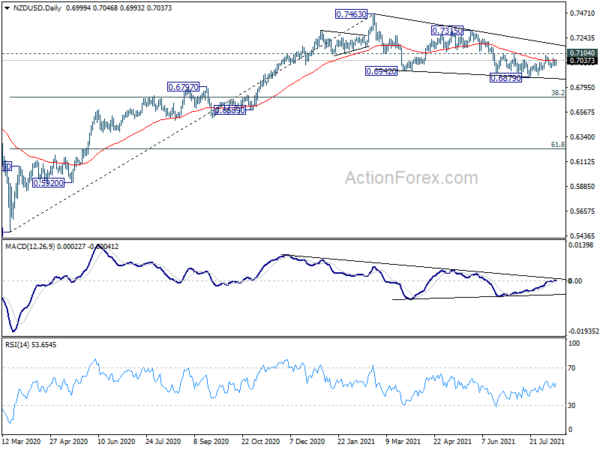 EUR/USD’s late rebound last week suggests short term bottoming at 1.1705, on bullish convergence condition in 4 hour MACD. That also came just ahead of 1.1602/1703 key support zone. Initial bias is now on the upside this week for 1.1907 resistance first. Decisive break there will suggest that fall from 1.2265, as well as consolidation pattern from 1.2348, have completed. Near term outlook will be turned bullish for retesting 1.2265/2348 resistance zone. However, below 1.1705 will turn focus back to 1.1602/1703 key support zone again. 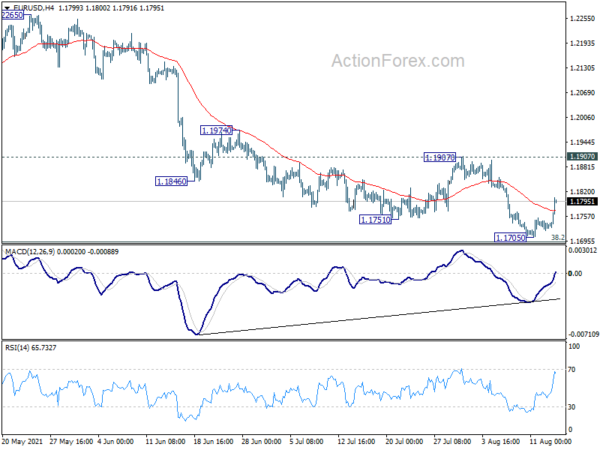 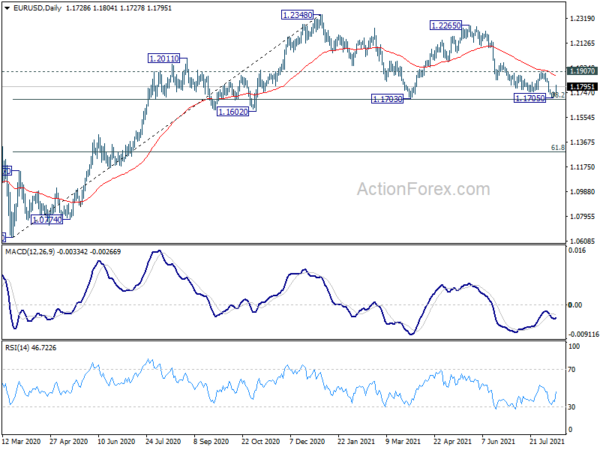 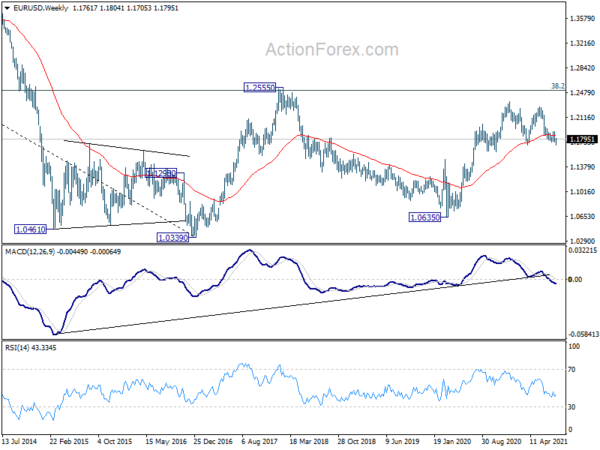 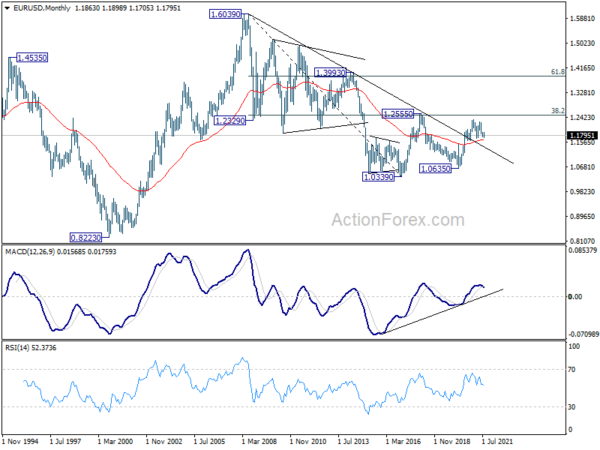