Commodity currencies recover mildly in Asian session but remain the worst performing ones for the week. Markets seemed to have priced in RBNZ standing pat well already. New Zealand Dollar recovered very quickly after initial spike following the announcement. On the other hand, Swiss Franc, Yen and to a lesser extent are still the strongest ones, digesting this week’s gains. Focus will now turn to inflation data from UK and Canada, and then FOMC minutes.

Technically, EUR/CHF has broken 1.0715 support while EUR/JPY also took out 128.58 support. Both developments suggest resumption of recent decline. EUR/USD also showed some weakness by breaching 1.1705 support. Sustained trading below there could spark downside acceleration, which would be reflected in EUR/CHF and EUR/JPY too.

RBNZ kept Official Cash Rate unchanged at 0.25% today, instead of raising it. The decision was “made in the context of the Government’s imposition of Level 4 COVID restrictions on activity across New Zealand.” Nevertheless, it reiterated that the “least regrets policy stance” was still to “further reduce the level of monetary stimulus”. But the Committee agreed to stand pat at this meeting “given the heightened uncertainty with the country in a lockdown.”

In the summary record, it’s also noted that committee members “now had more confidence that rising capacity pressures will feed through into inflation, and that employment is at its maximum sustainable level.” They concluded that “they could continue removing monetary stimulus”, following haling the LSAP program in July. 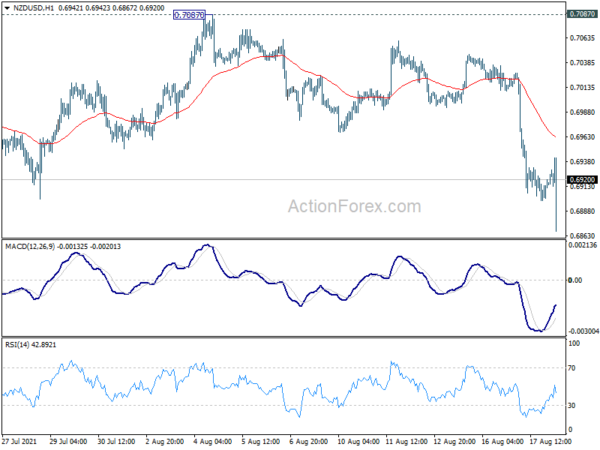 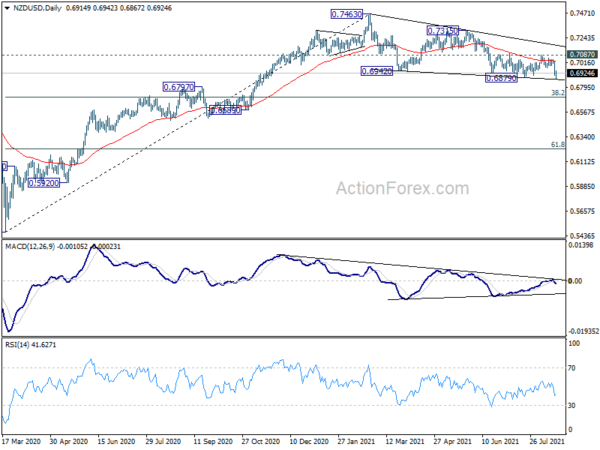 Australia leading index dropped to 1.3 in Jul, still consistent with above trend growth

Australia Westpac-MI leading index dropped from 1.36% to 1.30% in July. The index is still consistent with above trend growth over the next 3 to 9 months. Nevertheless, Westpac also said, “no Leading Index can accurately predict the impact of sudden virus lockdowns, although the direct effects of measures will start to become more apparent in the August Index.”

Also, with the deteriorating outlook in New South Wales and Melbourne due to lockdowns, West pact has revised down Q3 GDP forecast to a contraction of -2.6%, to be followed by 2.6% growth in Q4, and very strong growth of 5.0% in 2022.

Westpac added that RBA would likely to “take the same approach” as August in September meeting. That is, there would be no response to the current lockdown risks. However, it added, “we certainly cannot rule out a policy change in September especially if, as we assess, developments have raised some questions as to the vulnerability and timing of the expected recovery.

In seasonally adjusted term, exports was unchanged at JPY 7049B. Imports dropped -1.6% mom to 6997B. Trade balanced reported a surplus of JPY 52.7B.

Also from Japan, machinery orders dropped -1.6% mom in June, versus expectation of -2.8% mom.

Fed Powell: People and businesses have improvised and learned to adapt to COVID

Fed Chair Jerome Powell said yesterday that “it’s not yet clear whether the Delta strain will have important effects on the economy; we’ll have to see about that.” While COVID is “still with us,” he said, “people and businesses have improvised and learned to adapt.”

The pandemic is “still casting a shadow on economic activity. We cannot declare victory yet,” Powell said. But “many companies … have adapted their business models to the new world,”

Separately, Minneapolis Fed President Neel Kashkari said it’s “reasonable” to start tapering later this year. “There’s a lot of public discussion about, will it be at the end of this year, will it be the beginning of next year: Those seem like reasonable ranges of deliberation, but ultimately it will be driven by the data,” he added.

UK CPI and PPI will be a main focus in European session while Eurozone will release CPI final. Later in the day, Canada will also release CPI. US will release housing starts and building permits, as well as FOMC minutes. 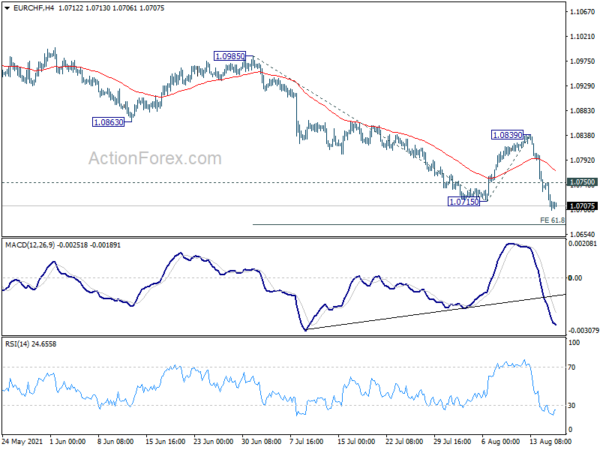 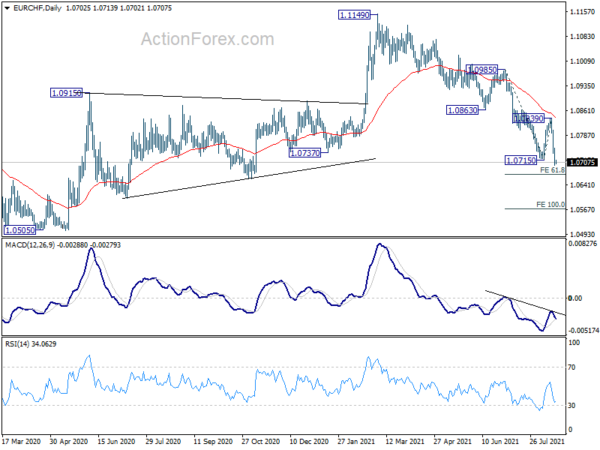