Canadian Dollar is trading as the worst performing one today and slightly weaker than expected retail sales data provide little help. Persistent weakness in oil price is weighing down the loonie, together with overall negative sentiment. Overnight development is unchanged that Dollar, Yen and Swiss Franc are the strongest while commodity currencies are the weakest. Sterling is under performing both Euro and Franc too.

Dallas Fed President Robert Kaplan said the the economic impact from the Delta variant is “unfolding rapidly”. “So far it’s not having a material effect” on consumer activity, he added. But, “it is having an effect in delaying return to office, it’s affecting the ability to hire workers because of fear of infection,” and may be affecting production output.

Kaplan previously said he would like to start tapering asset purchases in October. But he might now need to adjust he views “somewhat” due to Delta.

Canada retail sales rose 4.2% mom to CAD 56.2B in June, below expectation of 5.0% mom. Sales increased in 8 of 11 subsectors, representing 69.5% of retail trade. Core retail sales, excluding gasoline stations and motor vehicles and parts dealers, rose 4.6% mom. For Q2 as a whole, sales dropped -0.7% qoq. In the advance estimate, sales is expected to drop -1.7% mom in July.

Retail sales volumes over the last three months were up 11.1% on a year earlier.

UK Gfk consumer confidence dropped slightly from -7 to -8 in August, below expectation of -6. “Against a backdrop of cooling headline inflation and soaring house prices, the U.K. consumer confidence index is stable at minus 8 this August,” Joe Staton, GfK’s client strategy director, said.

“Expectations for our personal financial situation for the coming 12 months are holding up and this positivity bodes well for the economy going forward this year and next,” Staton said. The index measuring changes in personal finances over the past 12 months is up one point at 0.

Intraday bias in USD/CAD remains on the upside at this point. Current rise from 1.2005 should target for 1.3022 fibonacci level next. On the downside, below 1.2813 minor support will turn intraday bias neutral and bring consolidations first, before staging another rally. 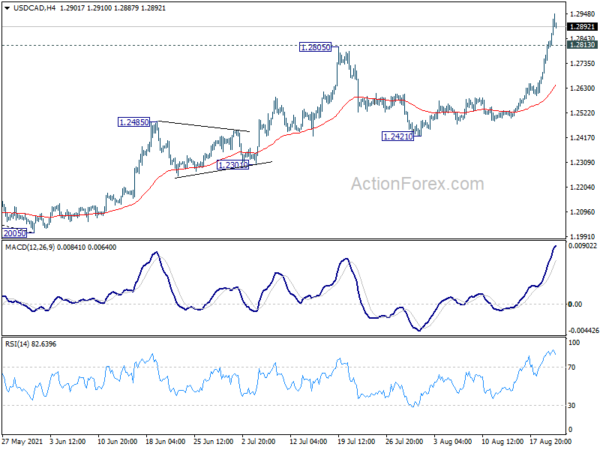 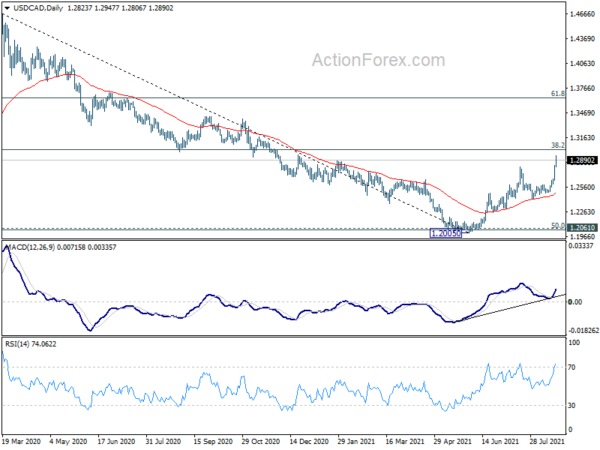