Markets continue to reverse some of last week’s move, as seen in the rebound in European and Asian equities. Dollar, Yen and Swiss Franc all turned weaker while commodity currencies strengthened. PMIs from Eurozone and UK are all solid, despite mild pull back. Yet, both are outshone by commodity currencies. Sterling is currently having a slight upper hand against Euro.

Technically, however, there is no clear sign of reversal for Dollar, Yen and Franc yet. Though, Gold’s break of 1795.42 resistance now suggests resumption of rebound from 1682.60. Reaction to 1800 handle will be watched, and sustained trading above would pave the way to retest 1832.47 resistance that. We’d see if EUR/USD would follow and break through 1.1084 resistance too. 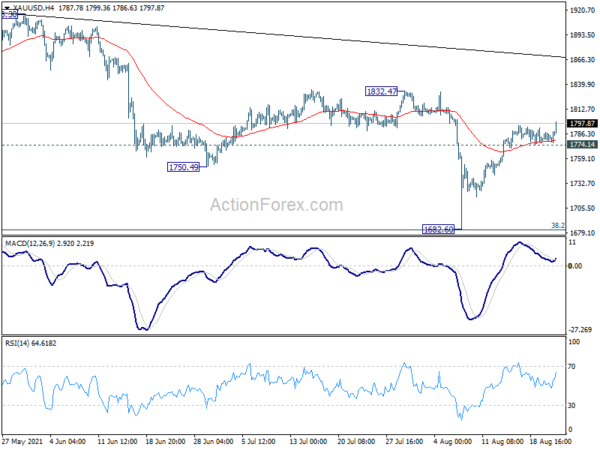 Chris Williamson, Chief Business Economist at IHS Markit, said: “Although the PMI indicates that the economy continues to expand at a pace slightly above the pre-pandemic average, there are clear signs of the recovery losing momentum in the third quarter after a buoyant second quarter… rising virus case numbers are deterring many forms of spending… Supplier delays have risen to a degree exceeded only once before… Prices have risen sharply again, albeit with the rate of inflation moving below July’s record high.

“More positively, business expectations for the year ahead perked up in August, encouraging a record jump in employment as furloughed workers were brought back to the workplace. However, demand and supply availability need to improve further for this rise in employment to be sustained in coming months”.

In the monthly report, Bundesbank said German economic output is “likely to rise sharply in summer 2021”, more strongly than in Spring. Industry was unable to take advantage of the growth in Q2 due to increased delivery bottlenecks. But there are initial signs that these delivery bottlenecks are “at least not worsening”. It remains to be seen if GDP could reach pre-crisis level in Summer or not until Autumn.

Inflation is expected to continue to rise in Germany, but then “decrease noticeably again at the beginning of 2022”, as the base effect will then no longer apply. Though, inflation could still be over 2% until mid-2022.

Chris Williamson, Chief Business Economist at IHS Markit said: “The eurozone’s economic recovery retained impressive momentum in August, with the PMI dipping only slightly from July’s recent high to put its average in the third quarter so far at the highest for 21 years… Firms benefited from virus containment measures easing to the lowest since the pandemic began…

“Supply chain delays continue to wreak havoc… combined with surging demand, led to another near-record increase in average selling prices for goods and services, though there are some welcome signs that these inflationary pressures may have peaked for now. Encouragement comes from a second month of job creation at the strongest for 21 years… some upward movement on wage growth… which could feed through to higher inflation”.

Phil Smith, Associate Director at IHS Markit said: “With August’s flash PMI still firmly inside growth territory, the recovery of the German private sector looks to be continuing at a healthy pace. Although growth has slowed down since July, the data are still pointing to a stronger economic expansion in the third quarter than the provisional 1.5% increase in GDP seen in the three months to June.”

France PMI composite dropped to 55.9, another strong month of growth

Joe Hayes, Senior Economist at IHS Markit said: “Another strong month of growth across France was signalled by the flash PMI figure for August. Despite some of the challenges businesses are facing on the supply side, it’s encouraging to see PMI data consistently signalling robust expansion. Furthermore, given we’re now midway through the third quarter, the survey data up to this point suggest we could see another decent out turn in the corresponding GDP figure.”

Jingyi Pan, Economics Associate Director at IHS Markit, said: “Australia’s private sector remained stuck in decline in August… as activity remained heavily impacted by current mobility restrictions brought about by the spread of the COVID-19 Delta variant. Not only were demand and business activity hit, employment conditions also deteriorated, with private sector staffing levels falling for the first time since October 2020… The one bright spot had been an improvement in the outlook amongst Australian private sector firms in August, with hopes of an improvement in the COVID-19 situation expected to spark an eventual rebound for the Australian economy.”

EUR/USD’s recovery from 1.1663 continues but stays below 1.1804 resistance. Intraday bias remains neutral first. In case of another fall, we’d continue to look for strong support from 1.1602/1703 key support zone to bring rebound. On the upside, above 1.1804 resistance will turn bias back to the upside for 1.1907 resistance first. However, sustained break of 1.1602/1703 will carry larger bearish implication and pave the way to 1.1289 fibonacci support. 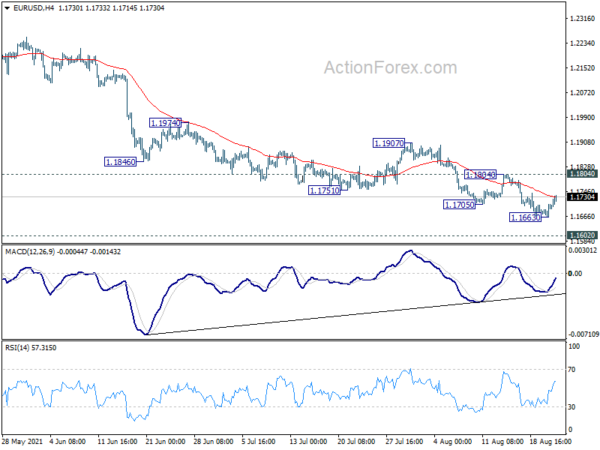 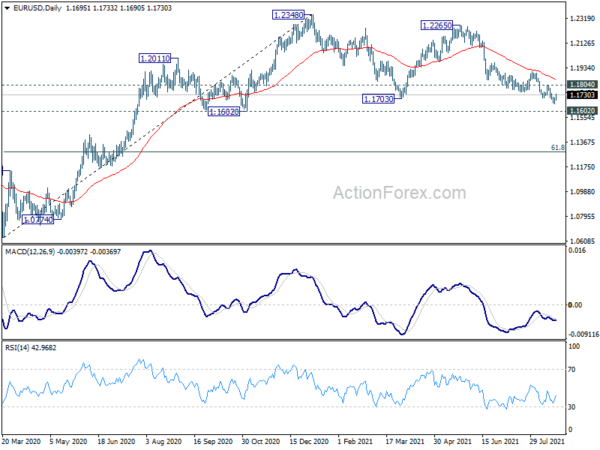