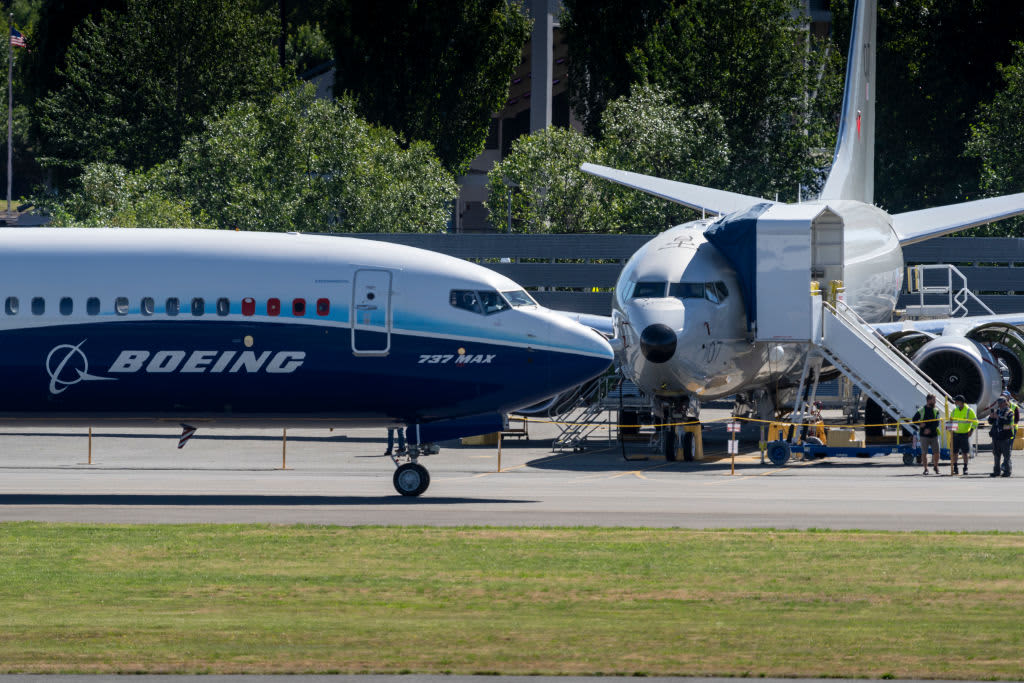 A Boeing 737 MAX 10 airliner pauses while taxiing on the flight line before its first flight at Renton Municipal Airport on June 18, 2021 in Renton, Washington.

Boeing — Shares of Boeing jumped more than 2% after Virgin Orbit, a satellite-launching spinoff of Sir Richard Branson’s Virgin Galactic, announced it will go public at a $3.7 billion valuation. Boeing is set to invest in the deal’s private investment in public equity round. Virgin Orbit is combining with special purpose acquisition company NextGen Acquisition Corp. II, which saw its shares gain about 2% after the news.

Pfizer, BioNTech — Shares of the drugmakers rose on Monday after the Food and Drug Administration granted full approval to the Pfizer and BioNTech Covid-19 vaccine – becoming the first in the U.S. to win the coveted designation. Shares of Pfizer rose about 2.6% and BioNTech surged more than 10%. Shares of Moderna rose more than 6% in hopes that the approval will pave the way for the company’s own approval.

General Motors — Shares of the automaker ticked more than 1% lower after General Motors expanded the recall of its Chevy Bolt electric car on Friday. It will include newer models, a move which will cost the automaker an additional $1 billion. The recall will address an issue that can increase the risk of battery fires.

Robinhood — Robinhood shares jumped more than 3% despite bearish calls on the newly public brokerage stock from Wall Street analysts. Many investment firms initiated coverage of Robinhood on Monday with neutral or equal weight ratings, and the stock even received a rare underweight rating from JPMorgan’s Kenneth Worthington.

Didi Global — The Chinese ride-hailing app’s shares gained more than 1% despite Beijing’s probe into the company. The Financial Times reported that Didi may be forced to hand over shares containing special rights to the Chinese government and the company may be asked to lower the commissions it takes from drivers.

Tesla — Shares of Tesla jumped over 4% after Deutsche Bank reiterated its buy rating on the electric vehicle maker. The firm said Tesla’s Artificial Intelligence day last week has set forth a “bold vision” and analysts “came away with greater appreciation for <a href="https://www.cnbc.com/quotes/T