Dollar spikes lower in early US session after huge NFP miss. But the selloff is only firm against commodity currencies at the time of writing. In particular, the greenback is trying to recovery against European majors, as well as Sterling. Traders might need a bit more time to make up their mind. While a September announcement on Fed tapering is now looking much less likely, it could still come in November.

Technically, EUR/USD is struggling to break through 1.1907 resistance with power for now. We’d continue to pay attention to this level. Sustained break would turn near term outlook bullish for 1.2265/2345 resistance zone. At the same time, Gold breaks out to the upside, but there is no follow through buying through 1832.47 resistance yet. Sustained break of this resistance should bring even stronger rise to 1916.30 resistance next. 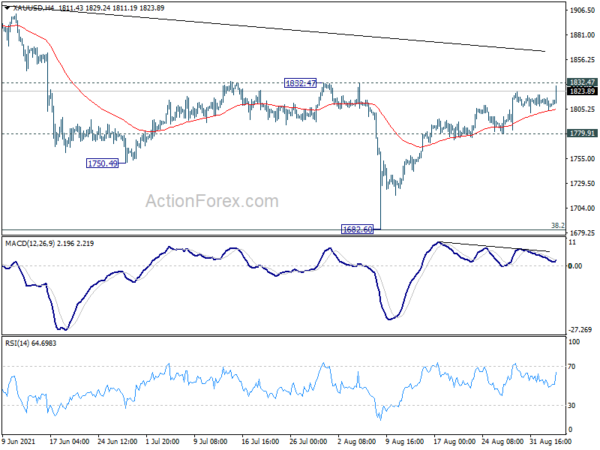 US non-farm payroll employment grew only 235k in August, well below expectation of 750k. Notable job gains occurred in professional and business services, transportation and warehousing, private education, manufacturing, and other services. Employment was still down by -5.3m from pre-pandemic level in February 2020.

Unemployment rate dropped from 5.4% to 5.2%, matched expectations. Number of unemployment persons edged down to 8.4m. Both measures remain far above their levels prior to the pandemic (unemployment rate at 3.5% and unemployed at 5.7m). Labor force participation rate was at 61.7%, staying in the 61.4% to 61.7% since June 2020.

Eurozone retail sales dropped -2.3% mom in July, well below expectation of 1.2% mom rise. For the month, the volume of retail trade decreased by -3.5% for non-food products, by -1.6% for automotive fuels and by -0.7% for food, drinks and tobacco.

Joe Hayes, Senior Economist at IHS Markit said: “It was another solid result for euro area businesses in August, according to the PMI numbers, which still point to rapid rates of expansion in output and demand…. but a step down since the preliminary ‘flash’ number tells us that this growth momentum is fading… Regardless, another strong quarter-on-quarter rise in GDP is on the cards for the third quarter, and we’re certainly on track for the eurozone economy to be back at pre-pandemic levels by the end of the year, if not sooner.”

UK PMI Services was finalized at 55.0 in August, down from July’s 59.6, and way below May’s record high of 62.9. PMI Composite was finalized at 54.8, down from July’s 59.2. Markit said recovery in business activity eased further from May’s peak. Employment numbers rose at fastest rate since survey began in July 1996. Business optimism also climbed to three-month high.

Tim Moore, Economics Director at IHS Markit, which compiles the survey: “The service sector lost momentum for the third consecutive month as the impact of looser pandemic restrictions faded in August. Many businesses suffered constraints on growth due to staff shortages, self-isolation rules and stretched supply chain capacity.”

“In particular, the first full month of lockdown in New South Wales, following the Delta outbreak in June, saw retail turnover in the state fall 8.9 per cent. This was the largest fall of any state and territory since August 2020.”

Ai Group Head of Policy, Peter Burn, said: “Australia’s construction sector has shifted from healthy expansion to steep contraction in a flash as restrictions in the face of COVID-19 outbreaks have closed sites and disrupted supply chains.

“The impacts were concentrated in the south-east corner of the country although border closures by other states also contributed to supply chain disruptions and prevented the movement of construction personnel.”

Wang Zhe, Senior Economist at Caixin Insight Group said: “The Covid-19 resurgence has posed a severe challenge to the economic normalization that began in the second quarter of 2020. Both manufacturing and services shrank in August, with the latter hit harder than the former…

“Official economic indicators for July were worse than the market expected, indicating mounting downward pressure on economic growth. Authorities need to take a holistic view and balance the goals of containing Covid-19, stabilizing the job market, and maintaining stability in prices and supply.”

EUR/USD rises to as high as 1.1908 so far today. Intraday bias remains on the upside with focus on 1.1907 resistance. Decisive break there will indicate that fall from 1.2265, as well as the consolidation pattern from 1.2348, have completed. Near term outlook will be turned bullish for 1.2265/2348 resistance. On the downside, break of 1.1792 minor support will turn bias back to the downside for 1.1602/63 support zone instead. 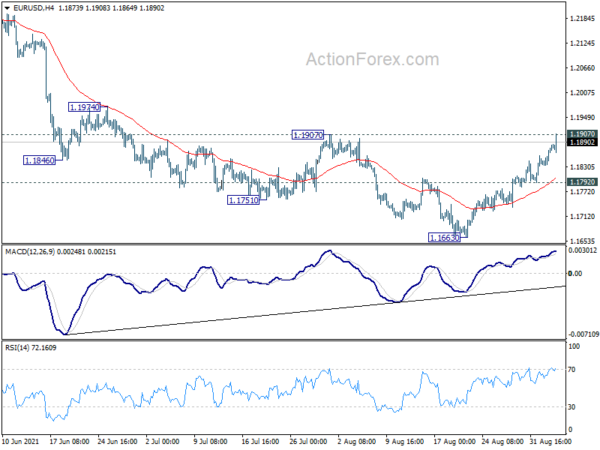 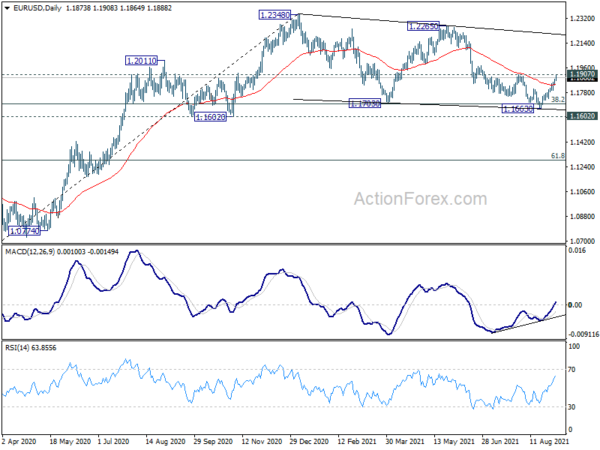