Trading the the forex markets remain rather subdued in Asian session. Aussie basically shrugs off RBA’s decision to taper, but extend QE. Dollar is trading slightly softer, as yesterday’s recovery lost momentum. European majors are currently the slightly firmer ones. But overall, traders are staying in wait-and-see mode. Risk sentiment elsewhere is firm, however, with Nikkei extending the powerful rally, and 30k handle is just half-step away.

Technically, the next move in Dollar would remain a major focus. EUR/USD will need to forcefully break through 1.1907 resistance to confirm near term bearish reversal in the greenback. However, rejection from there, followed by 1.1792 minor support will argue that EUR/USD’s rebound from 1.1663 has completed, and revive Dollar buying. At the same time, we will apply slightly tighter condition for Gold, a break of 1804.07 support will suggest rejection by 1832.47 resistance, at least on first attempt. Deeper pull back could be seen back and that, if happens, could come with a stronger rebound in Dollar. 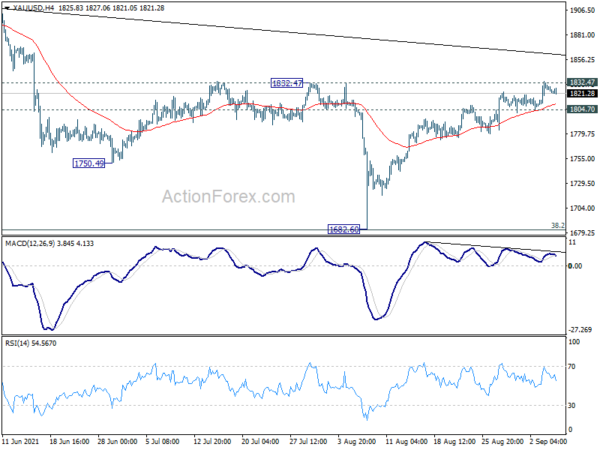 RBA tapers but extends QE, Delta to delay but not derail recovery

RBA kept with its tapering plan and announced to lower purchase of government securities at AUD 7B a week. But the program is extended until at least mid-February 2022, from mid November. At the same time, cash target rate is held at 0.10%. Target for April 2024 Australian government bond yield was also kept at 0.10%.

The central bank said the economy has been “interrupted by the Delta outbreak and the associated restrictions on activity”. GDP is expected to “decline materially” in Q3 with unemployment rate moving high over coming months. But the setback to economic expansion is “expected to be only temporary”. The Delta outbreak is expected to “delay, but not derail” the recovery. Economy will be growing again in Q4 and back to pre-Delta path in H2 of next year.

The decision to “extend” the asset purchases “reflects the delay in the economic recovery and the increased uncertainty associated with the Delta outbreak”. RBA pledged o continue to review on the program. Also, it maintained that the condition for rate hike “will not be met before 2024”.

Australia AiG services dropped to 56.6, outlook weak for another month or two

Ai Group Chief Executive, Innes Willox, said: “Increased COVID-19 cases and the lockdowns aimed at constraining the spread of the virus saw the performance of the services sector slump in August… With lockdowns in Victoria, the ACT and NSW set to continue this month and with new orders down on previous levels, the immediate outlook is for another weak month or two. In the meantime, a lot hinges on the healthy supply of vaccines, success in overcoming hesitancy about vaccination and clear and convincing leadership from across the National Cabinet.”

Despite some loss of upside momentum, with 0.7394 minor support intact, intraday bias stays on the upside for 0.7503 support turned resistance. Correction from 0.8006 should have completed at 0.7105 already. Sustained break of 0.7530 will pave the way to retest 0.8006 high. On the downside, break of 0.7394 minor support will turn intraday bias neutral and bring consolidations first. 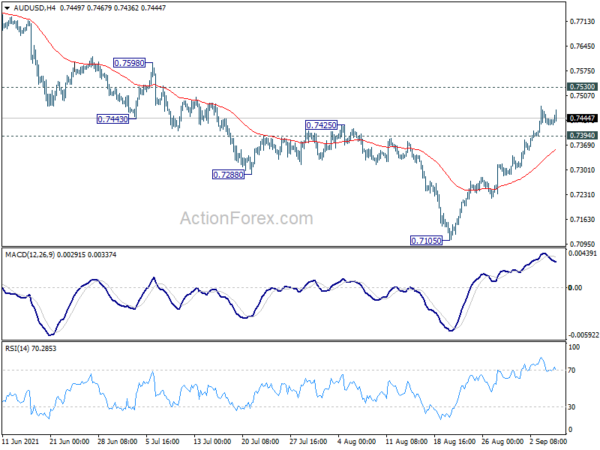 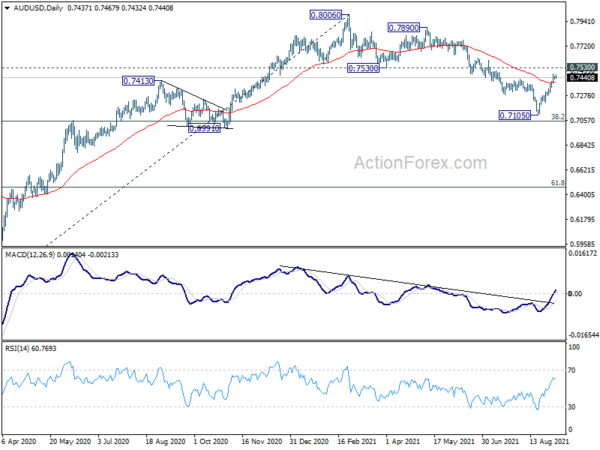