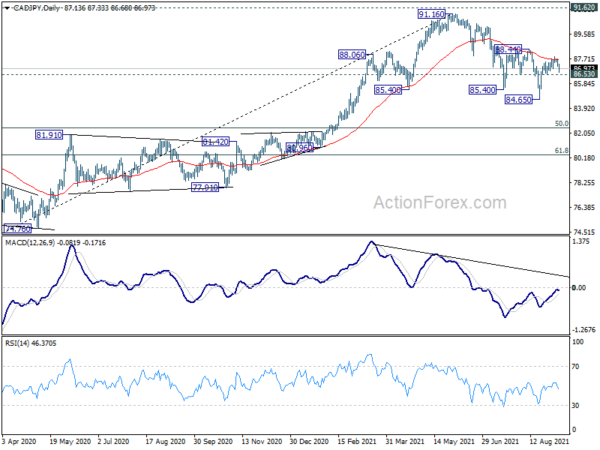 Euro and Swiss Franc weaken mildly in mixed markets today. New Zealand Dollar firms up together with Yen and Dollar. Meanwhile, Canadian Dollar is also soft, awaiting BoC policy decision. Major European indices are trading in red, but losses are limited. US futures also point to slightly lower open. Gold is trying to reclaim 1800 handle after breaching it. WTI crude oil is slightly up, and could head to retest 70 handle.

Technically, we’d continue to keep an eye on 1.2706 resistance in USD/CAD. Firm break above would revive near term bullishness, for resuming the larger rise form 1.2005 through 1.2947 high. Meanwhile, break of 86.53 support in CAD/JPY would indicate rejection by 55 day EMA again. In this case, correction from 91.16 would likely resume through 84.65 support.

ECB Holzmann: We may be able to normalize monetary policy sooner than most expect

ECB Governing Council member Robert Holzmann, Bank of Austria head, said in an Eurofi Magazine article, “there is the possibility that we may be able to normalize monetary policy sooner than most financial market experts expect.” He pointed to upward price pressures which could turn into inflation expectations.

Holzmann added, “this does not mean that we will withdraw accommodation prematurely, but rather that accommodation will be needed for a shorter period than what markets expect.”

BoJ Kuroda: We will continue with our current monetary easing

In an interview by Nikkei, BoJ Governor Haruhiko Kuroda said, “we will continue with our current monetary easing to support corporate funding, and stand ready to take additional easing measures without hesitation as needed.” He added that there is no plan to end the asset purchases or begin selling its holdings.

Most candidates in the race to replace Yoshihide Suga as LDP leader and Prime Minister are pushing for another big pandemic relief package. Kuroda said, “even if fiscal policy becomes more aggressive, interest rates will remain low and help enhance the effect of fiscal policy.”

“Even if fiscal policy becomes more aggressive, interest rates will remain low and help enhance the effect of fiscal policy,” he added.

EUR/USD’s retreat from 1.1908 continues today but stays above 1.1792 minor support. Intraday bias remains neutral first. On the upside, sustained break of 1.1907 resistance will indicate that fall from 1.2265, as well as the consolidation pattern from 1.2348, have completed. Near term outlook will be turned bullish for 1.2265/2348 resistance zone. However, on the downside, rejection by 1.1907 followed by break of 1.1792 support will dampen the bullish case, and turn bias back to the downside for 1.1663 support instead.