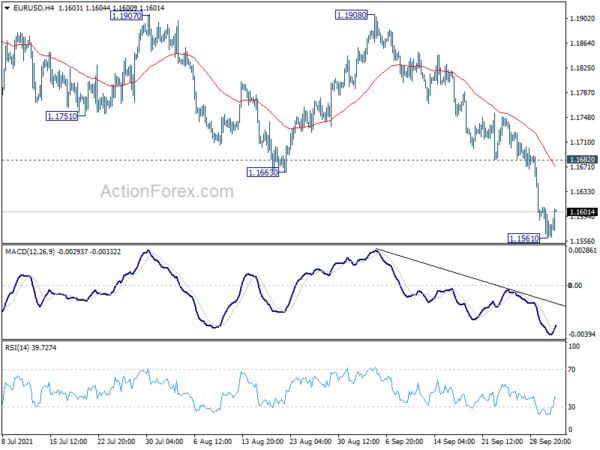 Dollar continues to pare gains in early US session as the week is coming to a close. PCE inflation data is largely ignored by the markets, while Euro also shrugs CPI. Canadian Dollar also ignores smaller than expected GDP contraction. Sterling is leading the way in the rebound, followed by Aussie. As for the week, the greenback is still in favor to close as the best performer, while New Zealand Dollar is the worst.

Eurozone PMI Manufacturing was finalized at 58.6 in September, down from August’s 61.4. That was the largest drop in the headline index since April 2020 as supply-side constraints impacted goods producers. Acute inflationary pressures persisted as supplier deliver time continued to lengthen considerably.

Chris Williamson, Chief Business Economist at IHS Markit said: “While Eurozone manufacturing expanded at a robust pace in September, growth has weakened markedly as producers report a growing toll from supply chain headwinds… The supply situation should start to improve now that COVID-19 cases are falling and vaccination rates are improving in many countries, notably in several key Asian economies from which many components are sourced, but it will inevitably be a slow process which could see the theme of supply issues and rising prices run well into 2022.”

UK PMI manufacturing finalized at 57.1, descending towards a bout of stagflation

UK PMI Manufacturing was finalized at 57.1 in September, down from August’s 60.3. Markit said output and new orders rose at slowest rates since February. New export business fell for the first time in eight months.

Rob Dobson, Director at IHS Markit, said: “The September PMI highlights the risk of the UK descending towards a bout of ‘stagflation’, as growth of manufacturing output and new orders eased sharply while input costs and selling prices continued to surge higher…. With little sign of resolution to these issues, manufacturers, especially smaller firms with lower market power or capacity flexibility, will continue to be buffeted by these headwinds for the foreseeable future, hinting at a tough autumn and winter ahead for many firms.”

BoJ opinions: No significant change in the situation in Japan

In the Summary of Opinions of BoJ’s September 21-22 meeting, it’s noted, “since there is no significant change in the situation in Japan where economic activity, such as of firms, has been supported by accommodative financial conditions, it is appropriate for the Bank to maintain the current monetary policy measures”.

One opinion also noted, “although financial markets have been stable on the whole, it is necessary to be vigilant in closely monitoring economic and financial developments, including the impact of developments in the Chinese real estate sector on global financial markets, and be ready to respond promptly if necessary.”

Large companies expected to expand capital investment by 10.1% in the fiscal year started April, risen from prior indication of 9.6%. Inflation is expected to be 0.7% a year from now, slightly higher than 0.6% as expected in prior survey.

Japan PMI Manufacturing was finalized at 51.5 in September, down from August’s 52.7. Markit noted renewed reductions in production and incoming business. Cost burdens has the sharpest rise in 13 years amid supply chain disruption. Businesses confidence, however, strengthened for the first time in three months.

Also released, unemployment rate was unchanged at 2.8% in August.

Ai Group Chief Executive Innes Willox said: “The recovery in the manufacturing sector over the past year all-but-stalled in September as the impacts of lockdowns and border closures constrained activity in the two largest states…. Manufacturers are hoping that the prospect of restrictions being wound back will see a strong lift in performance over coming months.”

Intraday bias in EUR/USD is turned neutral with 4 hour MACD crossed above signal line. Upside of recovery should be limited by 1.1682 resistance to bring another fall. On the downside, break of 1.1561 will extend the whole fall from 1.2348, as a correction to whole rise from 1.0634. Next target is 1.1289 medium term fibonacci level. Nevertheless, sustained break of 1.1682 will bring stronger rebound back towards 1.1908 resistance. 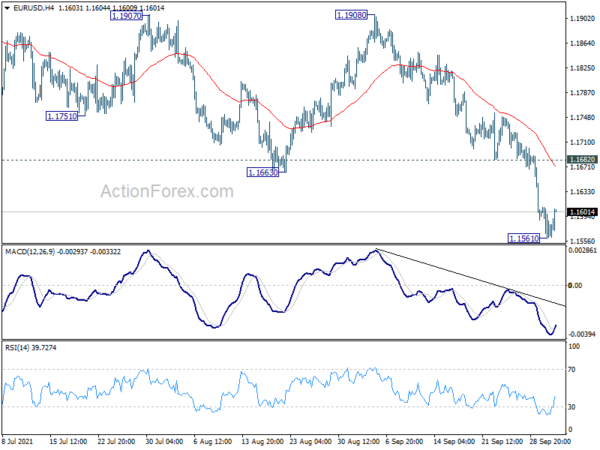 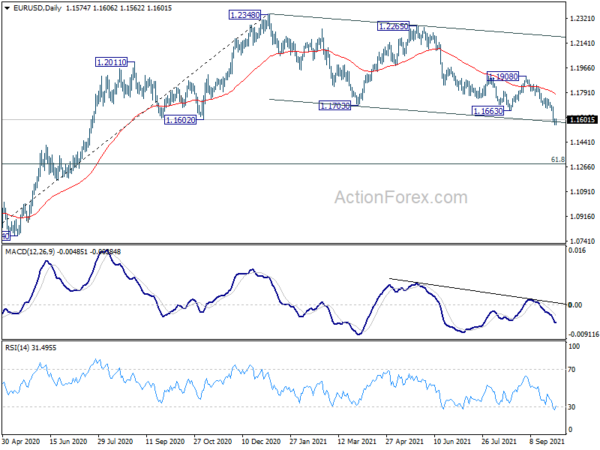