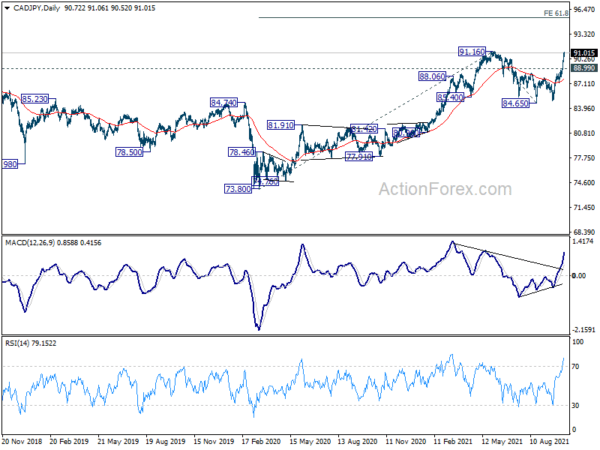 There is basically no change in the Yen selloff theme in the markets. But buying focus has shifted to commodity currencies, as led by Aussie and Kiwi, as well as Sterling. Euro is turning a touch weaker after poor German sentiment data, while the Pound is supported by job data. Dollar is sluggish as traders await the next moves in US yields and stocks. 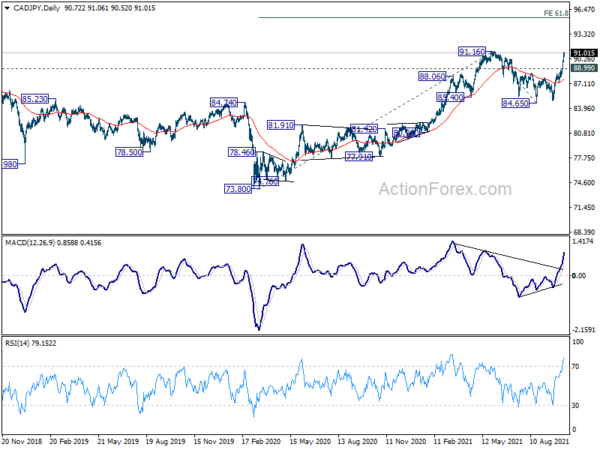 Eurozone ZEW Economic Sentiment dropped from 31.3 to 21.0, below expectation of 26.5. Eurozone Current Situation dropped -6.6 pts to 15.9. Eurozone inflation expectations indicator dropped -3.0 pts to 17.1. But 49.1% of experts still expect inflation to rise further in the next six months.

ZEW President Professor Achim Wambach said: “The economic outlook for the German economy has dimmed noticeably. The further decline of the ZEW Indicator of Economic Sentiment is mainly due to the persisting supply bottlenecks for raw materials and intermediate products. The financial market experts expect profits to go down, especially in export-oriented sectors such as vehicle manufacturing and chemicals/pharmaceuticals.”

UK employment back to pre-pandemic level in Sep

Some analysts noted that the surge in wholesale prices would be absorbed mainly by businesses, with little impact on consumers. But according to a BoJ survey published on Monday, 68.2% of Japanese households are expecting prices to rise a year from now, up from 66.8% three months ago. Median projection of inflation a year from now rose to 3.0%, up from June’s 2.0%.

Australia NAB business confidence jumped to 13, but condition tumbled to 5

NAB said, “Interpreting this month’s results really depends if you are an optimist or a pessimist. Businesses are really looking forward to reopening, and confidence increased markedly on the back of NSW and Victor