Australia Dollar tumbles broadly today as markets are dissatisfied with RBA’s dovish stance, even though yield curve control is abandoned. Commodity currencies are also trading generally lower. On the other hand, Yen is staging a strong rebound after Japanese Finance Minister Shunichi Suzuki said he’s keeping an eye on the weakening exchange rate. The move is also accompanied by pull back in both Nikkei and benchmark JFB yield. Dollar and Euro are also trading mildly firmer.

Technically, EUR/GBP’s break of 0.8474 minor resistance suggests short term bottoming at 0.8401. We’ll see if that would be translated into break of 1.3646 support in GBP/USD, or stronger rebound in EUR/USD, or both. At the same time, USD/JPY is also extending the consolidation pattern from 114.69 as another falling leg. Break of 113.24 would bring deeper correction.

RBA kept cash rate target unchanged at 0.10% as widely expected today. The asset purchase program, however, will continue at AUD 4B per week until at least February 2022. However, without much surprise, it discontinue 0.10% target for April 2024 government bonds, effectively abandoning yield curve control.

As for forward guidance, RBA maintain that cash rate won’t be raised until actual inflation is “sustainably within the 2 to 3 per cent target range”. But now, it forecasts inflation to be no higher than 2.50% at the end of 2023, hinting that rate hike could come earlier than that.

AUD/JPY dips as consolidation from 86.24 extends with another leg

Aussie drops notably after even though RBA abandoned yield curve control, and signaled that interest rate could be raised earlier than previously expected. Yet, it’s clear that RBA would hold their hands, probably after well into 2023, before making a decision, if inflation is not out of control. That is, it will still lag behind some other major central banks in stimulus removal.

AUD/JPY is now extending the consolidation pattern from 86.24 short term top with another falling leg. 84.59 support would provide the first defense. As long as this level holds, the consolidation should be relatively brief, and we’d expect a break of 86.24 high to come sooner rather than later. In that case, the medium term up trend would continue to 61.8% projection of 59.85 to 85.78 from 77.88 at 93.90 next. 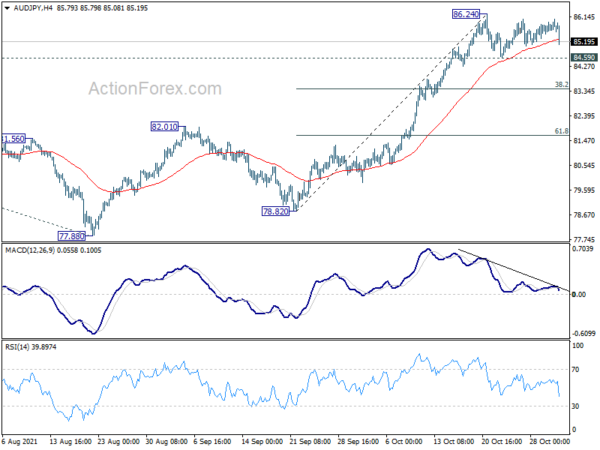 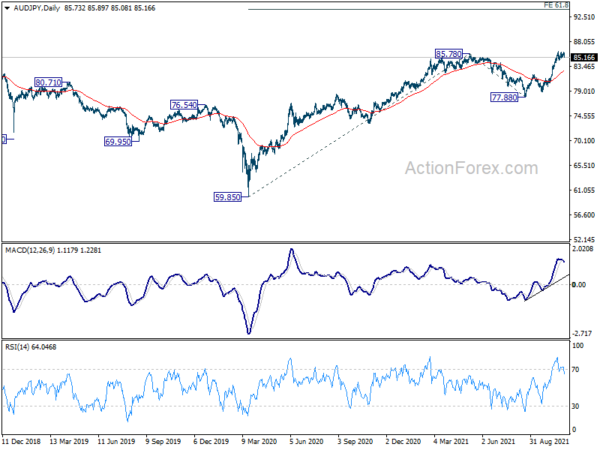 In a speech, RBNZ Governor Adrian Orr warned, “it will come as no surprise to you that in our forthcoming Financial Stability Report we will again elaborate on why we view the level of house prices as unsustainable, and why this matters.”

“At the source of the financial stability risk is the inability of housing supply to respond in a timely fashion to changes in demand, and the drivers that lead to a bias towards housing as an investment choice beyond simply a place to reside,” he said.

“There is no one agency or silver bullet. House prices and housing affordability are affected by both supply and demand factors, ranging across immigration, tax policy, government benefits or transfers, land availability, building standards, infrastructure, and training programmes,” he added”

“Ultimately, it is access to land and space that has recently proved to be the biggest challenge to enabling a smooth functioning housing market”.

USD/JPY failed to break through 114.69 high and reversed. Consolidation from there is extending with another falling leg. Intraday bias remains neutral first. Break of 113.24 will bring deeper pull back, but downside should be contained above 112.07 resistance turned support to bring rebound. On the upside, firm break of 114.69 will resume the larger up trend to 100% projection of 102.58 to 111.65 from 109.11 at 118.18 next. 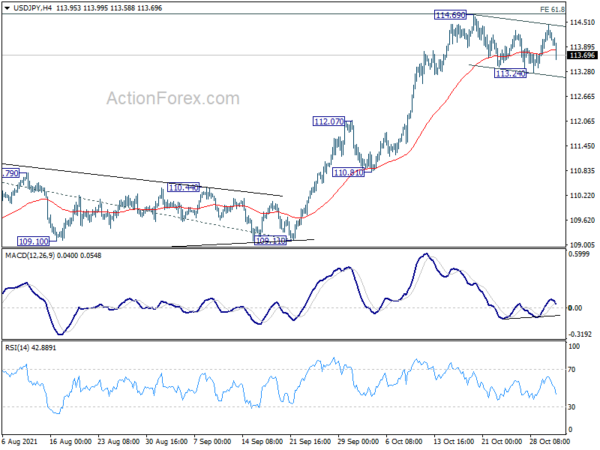 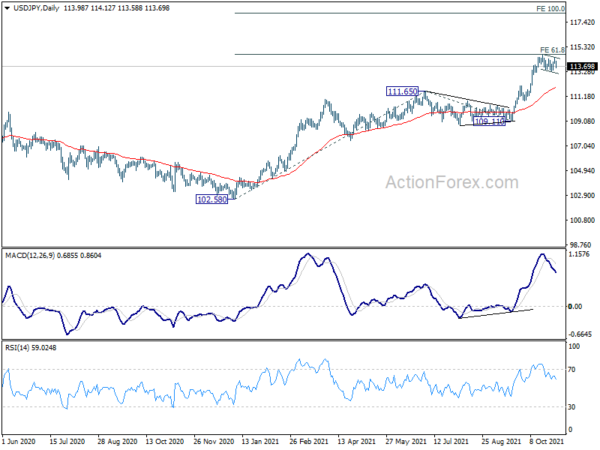