Yen Retreating in Quite Markets, But More Upside Still Likely

The financial markets are rather quiet today. Commodity currencies are paring back some of last week’s losses while Yen is retreating. But there is no change in the overall outlook, with the decline in Yen crosses more likely to continue than not. Trading could remain subdued first in European session with a light economic calendar. But comments from a number of Fed officials, including Chair Jerome Powell, Clarida, Bowman, Evans and BoE Governor Andrew Bailey could trigger some volatility.

Technically, a major focus will be on whether EUR/USD would follow up with last week’s downside breakout. For now, committed selling to push it through 1.1512 temporary low, and sustained trading below 1.1523 support, are needed to confirm resumption of the whole fall from 1.2348. At the same time, GBP/USD will need to break through 1.3410 support firmly to confirm resumption of the fall from 1.4248. 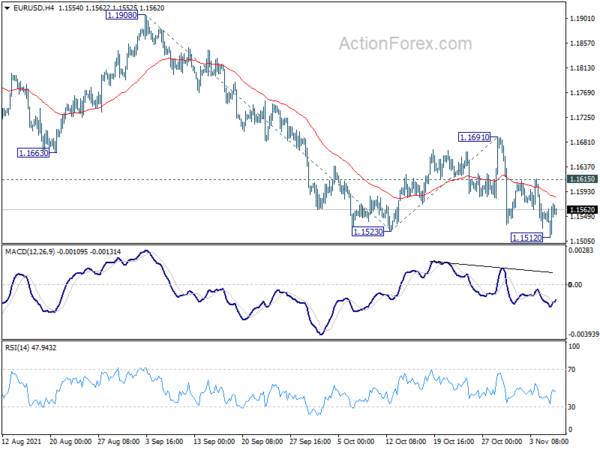 In the Summary of Opinions of BoJ’s October 27-28 meeting, it’s noted that because of low inflation, it’s important to persistently continue with extremely accommodative monetary policy even when pent-up demand increases.” Also, BoJ should “persistently continue with the current monetary easing” so that “a rise in corporate profits leads to wage increases and the virtuous cycle from income to spending intensifies.”

To “alleviate the effects of deterioration in the terms of trade”, it’s necessary to improve economic activity and raise inflation expectations so that “firms can smoothly pass on the rise in raw material prices to domestic selling prices.” It’s important to “improve the output gap” so that “the pass-through of price rises will be promoted..

Yen’s depreciation reflected “differences in inflation rates and monetary policy stances among economies.” It’s important to consider the impact of rise in international commodity prices and Yen’s depreciation. But, it is necessary to keep in mind that their effects on each economic entity are uneven depending on industry and size.

BoC Macklem: High inflation is transitory but not short-lived

BoC Governor Tiff Macklem said in in TV interview over the weekend that current high inflation will be “transitory but not short-lived”.

I think transitory, to economists, means sort of not permanent,” he said. “I think to a lot of people, transitory means it’s going to be over quickly. … I don’t know exactly what the right word is, but it’s probably something like, ‘transitory but not short-lived.’”

Macklem pointed to the latest economic projections, which indicated that inflation would rise further from current 18-year high of 4.4% to 5%, then gradually drop back to 2% by the end of next year. And that’s what he meant by “transitory but not short-lived”.

Bitcoin jumps above 65k handle today and rebound from 57762 finally picks up momentum after some setback. We’re slightly favoring the case that it’s ready to resume larger up trend to through 66982 record high. In that case, next target will be 161.8% projection of 29261 to 52922 from 39559 at 77842. However, break of 61613 support will delay the bullish case and extend the corrective pattern from 66982 with another falling leg. 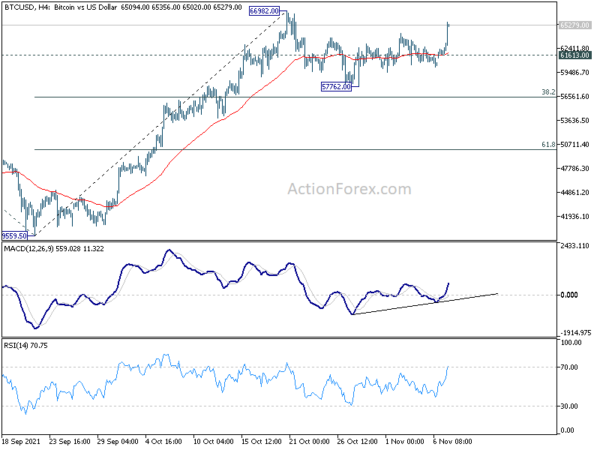 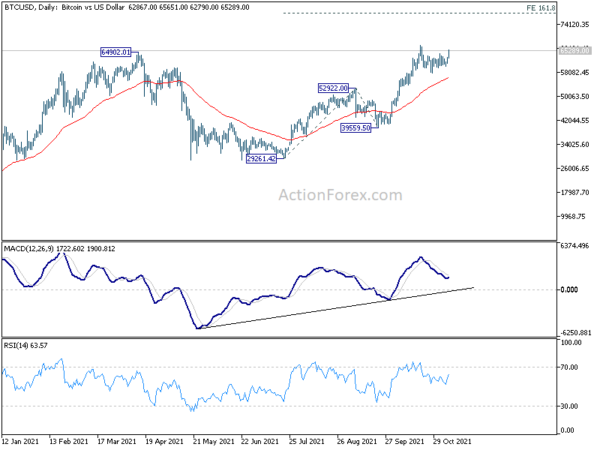 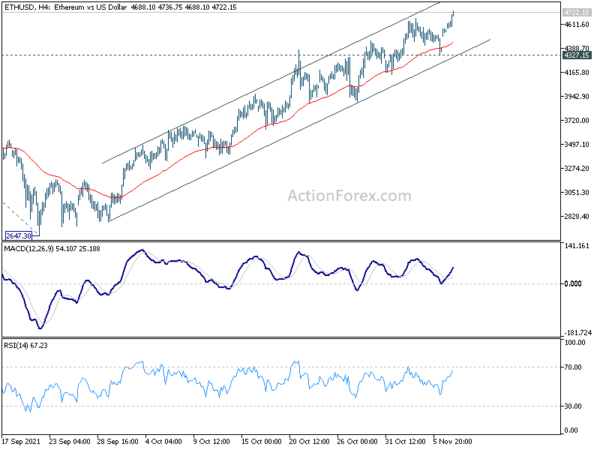 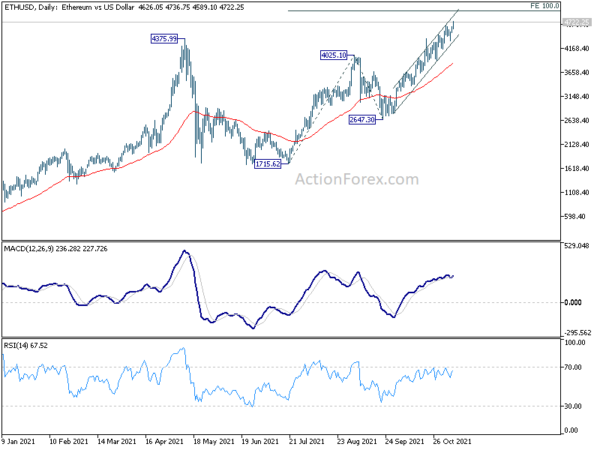 US CPI and PPI to highlight the week

Now that Fed has already laid out the path of tapering, main focuses will be on the timing of rate hike. That would very much depend on the path of inflation. Hence, US CPI and PPI could be market moving this week. Elsewhere, Eurozone Sentix and German ZEW, UK GDP, Australia employment and business confidence; New Zealand business confidence will also be closely watched.

As for central bank activities, BoJ will release summary of opinions while ECB will release monthly economic bulletin.

Intraday bias in GBP/JPY remains on the downside at this point. The break of 55 day EMA dampened our original bullish view. Deeper fall could now be seen back to 148.93 structural support level. On the upside, break of 154.63 minor resistance will revive near term bullishness and turn bias back to the upside for 158.19 high. 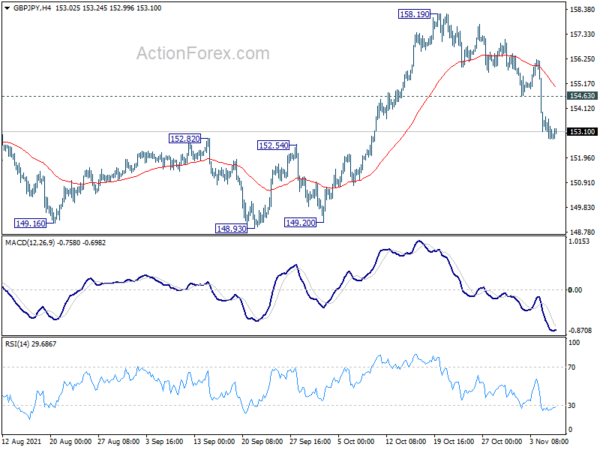 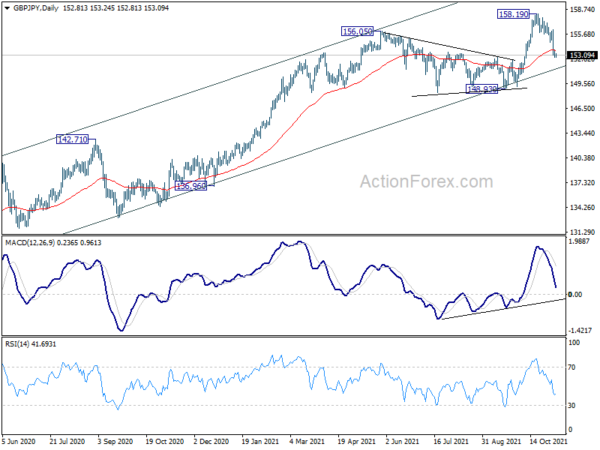