Sterling Breaking to the Downside, Euro in Weak Recovery

Markets are trading in mild risk off sentiment, while treasury yields also surge. New Zealand Dollar is leading other commodity currencies lower, and Sterling is week too. On the other hand, Euro and Swiss Franc are currently the stronger ones, followed by Dollar and Yen. But overall, it should be noted that Euro’s recovery is rather weak and risk remains higher for selloff to resume sooner or later.

Technically, GBP/USD’s breach of 1.3351 temporary low suggests that recent decline is ready to resume. We’d pay attention to see if the selloff would accelerate during the rest of the day. At the same time, We’ll also see if GBP/JPY would follow by breaking through 152.35 temporary low. If that happens, it would be a signal of more broad-based weakness in the Pound. 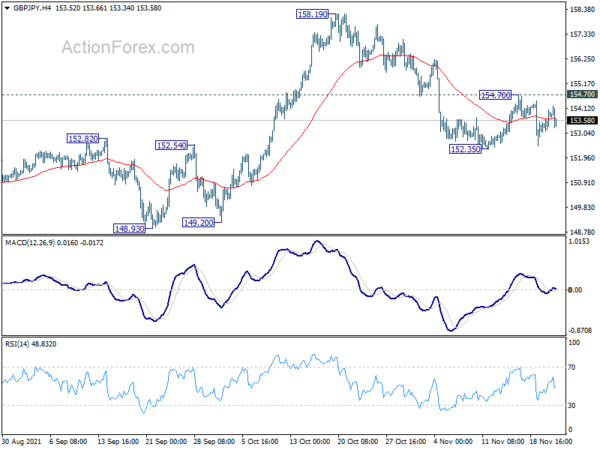 ECB Executive Board member Isabel Schnabel said in an interview, rising COVID-19 infections and containment measures is “likely to have a moderating effect on activity in the short run”, and it will not derail the overall recovery. Supply-side disruptions “do not diminish growth potential” but “merely shift activity over time”. Hence, her baseline is that “some growth deceleration in the short run, but then a continued strong recovery in the medium term.”

Schnabel expected ECB staff’s inflation projections to be “revised upwards for next year”. But inflation is “going to decline over the course of next year”. “It’s plausible to assume that inflation is going to drop below our target of 2% in the medium term,” she said. “however, the risks to inflation are skewed to the upside.”

She also noted the “time plan is still valid” for ending the PEPP purchases in March. “But we will have to see how this evolves until our December meeting.” She added, ” it has become clear that it’s very unlikely that a rate hike is going to happen next year. But it’s also clear that the uncertainty remains very high and this is reflected in markets.”

ECB Governing Council member Klaas Knot said, “today’s inflation outlook is clearly more favorable than it was pre-corona, in the sense that it’s closer to out target.”

“That’s something to take into account and that should also be a measure for the recalibration of asset purchases that we need to undertake in December,” he added.

Knot also predicts that the PEPP asset purchase would end in March, in spite of new pandemic restrictions being rolled out. He expects rate hike to happen some time after 2022. But, “if market is right on inflation, then it is also right on rates pricing.”

“A stronger expansion of business activity in November defied economists’ expectations of a slowdown, but is unlikely to prevent the eurozone from suffering slower growth in the fourth quarter, especially as rising virus cases look set to cause renewed disruptions to the economy in December.

“The manufacturing sector remains hamstrung by supply delays, restricting production growth to one of the lowest rates seen since the first lockdowns of 2020. The service sector’s improved performance may meanwhile prove frustratingly short-lived if new virus fighting restrictions need to be imposed. The travel and recreation sector has already seen growth deteriorate sharply since the summer.

“With supply delays remaining close to record highs and energy prices spiking higher, upward pressure on prices has meanwhile intensified far above anything previously witnessed by the surveys.

“Not surprisingly, given the mix of supply delays, soaring costs and renewed COVID-19 worries, business optimism has sunk to the lowest since January, adding to near-term downside risks for the eurozone economy.”

BoE Haskel: Rate hike from emergency level it not a bug, but a feature

BoE MPC member Jonathan Haskel said in a speech that “much of the variation in inflation is due to global factors such as imported goods and energy prices.” He expected much of that variation to be “transitory”.

“The latest data continues to indicate a tight labour market, putting upward pressure on wages,” he said. “From a living standards point of view, this is of course excellent news, but from an inflation point of view this has to be matched by increased productivity and so we have to be vigilant.”

The prospective rise in Bank Rate from its emergency level – when that comes – is not a bug, but a feature,” he added. “It reflects the success of the policies, mostly fiscal, health and science that have supported the economy over the pandemic.”

Chris Williamson, Chief Business Economist at IHS Markit, said: “A combination of sustained buoyant business growth, further job market gains and record inflationary pressures gives a green light for interest rates to rise in December… For policymakers concerned about the health of the labour market after the end of the furlough scheme, the buoyant jobs growth signalled should bring some reassuring comfort.

“A record increase in firms’ costs will meanwhile further stoke fears that inflation will soon breach 5%, with lingering near-record supply delays adding to indications that price pressures may show few signs of abating in the near-term. The relatively poor performance of manufacturing is likely to remain a concern for some time, however, as is the potential to see tighter growth-inhibiting COVID-19 restrictions applied amid high COVID-19 case numbers both at home and now also in continental Europe.

Jingyi Pan, Economics Associate Director at IHS Markit, said: “Supply chain issues featured strongly in the Australian PMI survey as delivery times lengthened, widespread shortages were reported and price increases continued to be seen. While some of these can be attributed to the presence of pent-up demand that was reported, it will be worth watching if the constraints clear over time.

“Overall business confidence improved in the latest survey and this was a very positive sign. Private sector firms were also more willing to expand their workforce capacity, though instances of labour shortages had continued to surface.”

Twelve of the 15 industries had lower sales volumes. By industry, the largest movements were: Food and beverage services – down -19%; Motor vehicle and parts retailing – down -12%; Department stores – down -24%; Hardware, building, and garden supplies – -down 15%.

GBP/USD’s break of 1.3351 suggests resumption of whole fall from 1.4248. Intraday bias is back on the downside for 1.3164 fibonacci level next. On the upside, break of 1.3512 resistance is needed to indicate short term bottoming. Otherwise, outlook will stay bearish in case of recovery. 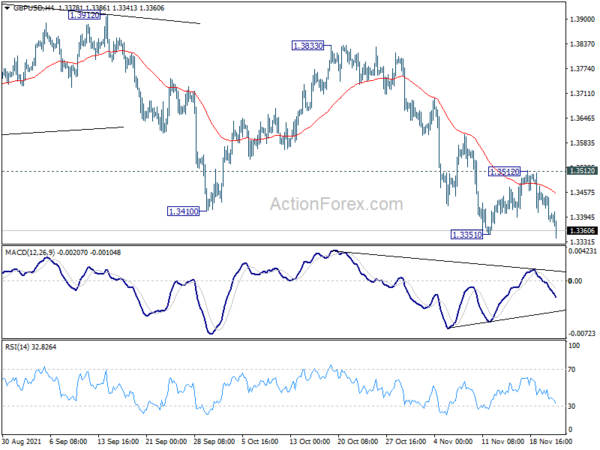 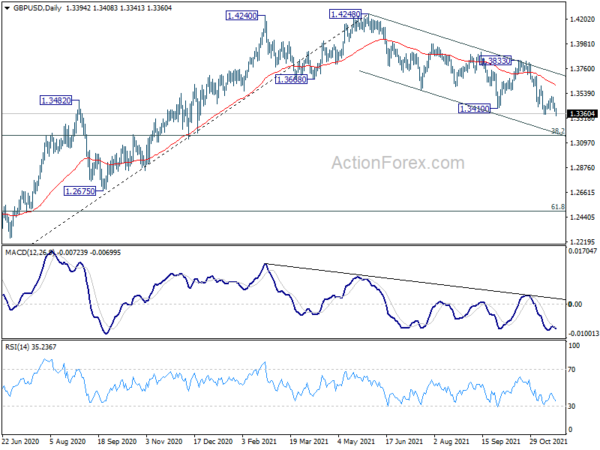