Dollar attempted for a rally overnight after hawkish comments from Fed Chair Jerome Powell, but momentum quickly faded. Instead, the greenback was dragged down by extended weakness in benchmark treasury yields. Overall market sentiment is stable in Asian session, helping commodity currencies rebound. Aussie is additionally lifted by better than expected GDP data. But then, any news regarding Omicron could trigger volatility again. 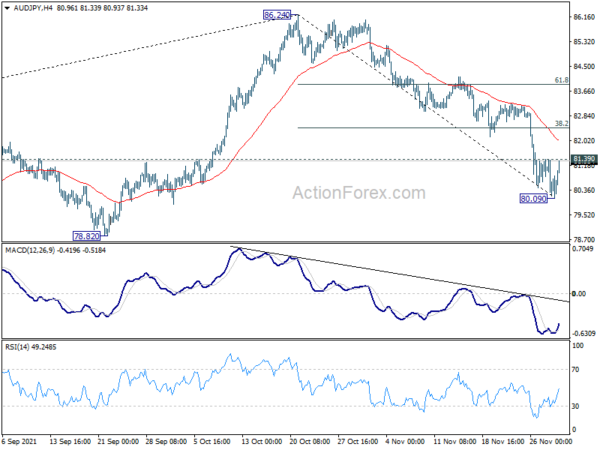 US stocks dropped sharply overnight following surprisingly hawkish comments from Fed Chair Jerome Powell. In short, he said that “the threat of persistently higher inflation has grown”. More importantly, Fed is “going to have a conversation at our next meeting about accelerating the taper and ending our asset purchases a few months early”.

Australia GDP contracted -1.9% qoq in Q3, back below pre-pandemic level

Acting Head of National Accounts at the ABS, Sean Crick said: “Domestic demand drove the fall, with prolonged lockdowns across NSW, Victoria and the ACT resulting in a substantial decline in household spending.

“The fall in domestic demand was only partly offset by growth in net trade and public sector expenditure. GDP in the September quarter 2021 was 0.2 per cent below the December quarter 2019 pre-pandemic level.”

Ai Group Chief Executive Innes Willox said: “The Australian manufacturing industry grew more decisively in November after a few flat months during which the south-east corner of the country was held back by the delta outbreaks and associated activity restrictions and while the states and territories tightened barriers to the movement of people.”

Wang Zhe, Senior Economist at Caixin Insight Group said: “To sum up, the manufacturing sector remained stable overall in November. Increased downward pressure and easing inflationary pressure were prominent features of the economic situation…. After the shortage of power was alleviated, the supply side began to recover. But due to weak demand, the supply recovery was limited, and the foundation of the recovery was not solid.”

Japan PMI Manufacturing was finalized at 54.5 in November, up from October’s 53.2. That’s the best reading since January 2018, and the 10th consecutive month of overall growth. Markit noted that output and new orders rose at faster rates. There was sharp rise in cost burdens amid sustained supply chain disruption. Businesses reported strong optimism regarding future output.

Also released, capital spending rose 1.2% in Q3 versus expectation of 2.7%.

Swiss CPI and SVME PMI will be released in European session. Germany will release retail sales. Eurozone and UK will release PMI manufacturing.

AUD/USD’s break of 0.7158 minor resistance argues that a short term bottom might be formed at 0.7061, on bullish convergence condition in 4 hour MACD. Intraday bias is back on the upside for stronger rebound, possibly towards 55 day EMA (now at 0.7318). In case of another fall, we’d look for support from 0.6991/7051 key support zone to bring rebound. But sustained break there will carry larger bearish implications. 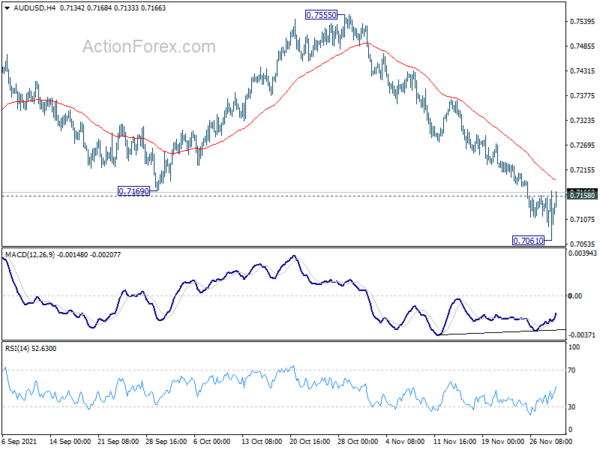 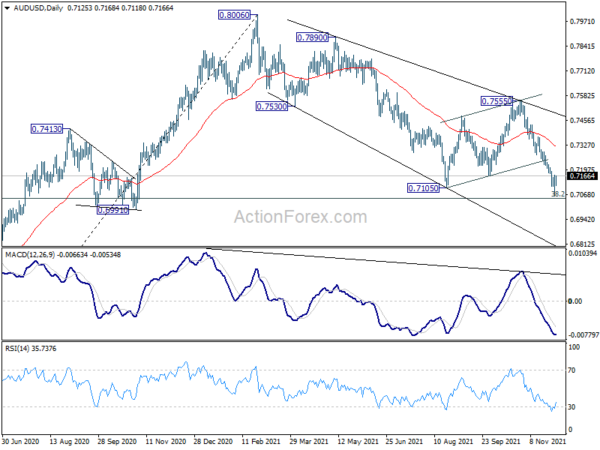