Major currencies remain largely in range against each other in quiet trading today. Australian Dollar continues to lead other commodity currencies to recover. But Aussie’s recovery could be short-lived if RBA delivers some unexpected dovish surprise in the coming Asian session. Meanwhile, Swiss Franc is turning notably weaker, followed by Yen and then Euro and Dollar.

Technically, US benchmark yields and stocks are set for a rebound in early trading. We’ll see how that would drive the next move in Yen crosses. In particular, GBP/JPY has lose some downside momentum just ahead of 148.93 keys support level. Rise from current level, followed by break of 152.35 resistance would turn near term bias back to the upside. However, sustained break of 148.93 will pave the way to next cluster level at 145.25. 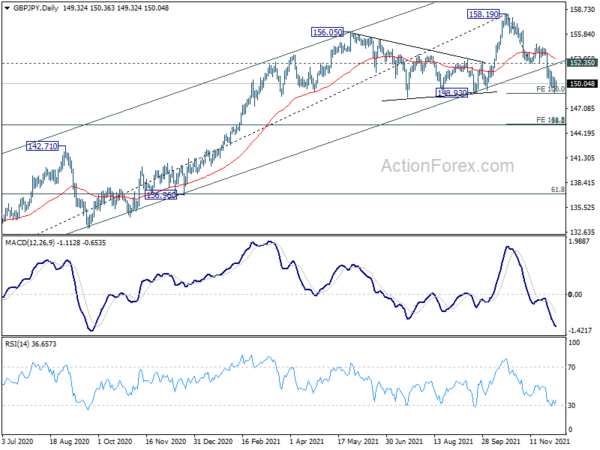 BoE Deputy Governor Ben Broadbent reiterated in a speech that “it takes time for policy to work”. “A change in interest rates has its peak impact on inflation only after a significant delay – probably eighteen months or more”.

When global central bankers used the word “transitory” in describing current surge in inflation, “they do not mean (and never meant) that these effects will be gone in one, two or even twelve months”.

“The relevant question is whether the global factors currently pushing up on goods prices are still there by the time a policy decision taken today could have any significant effect of its own,” he added.

“What is their prospective contribution to inflation in eighteen, twenty-four months and beyond? This is the horizon that matters for policy and against which the word ‘transitory’ should be measured.”

UK PMI Construction rose from 54.6 to 55.5 in November, above expectation of 52.0. Markit noted recovery was led by robust and accelerated rise in commercial work. Numbers of firms reporting suppliers delays continued to ease. In put costs inflation dipped to seven-month low.

Tim Moore, Director at IHS Markit: “November data highlighted a welcome combination of faster output growth and softer price inflation across the UK construction sector…. Input price inflation remains extremely strong by any measure, but it has started to trend downwards after hitting multi-decade peaks this summer… Port congestion and severe shortages of haulage capacity were again the most commonly cited reasons for longer lead times for construction products and materials.”

“The challenge for January 1st is now very clear for the UK economy. Significant headwinds and rising costs of living threaten the extent of recovery and prospects for economic success. These hurdles for firms will provide a major test for the government – can they foster sustainable UK investment and growth?” said Tony Danker, CBI director-general.

“The UK’s New Year resolution must be to give firms the confidence to go for growth. We should be raising our sights on the economy’s potential and seizing the moment.”

Eurozone Sentix Investor Confidence dropped from 18.3 to 13.5 in December, missed expectation of 15.9. That’s also the lowest level since April. Current Situation Index dropped for the third straight month from 23.5 to 13.3, lowest since May. Expectation Index, on the other hand, improved slightly from 13.3 to 13.8.

Sentix said that hopes of an end to the economic slowdown “have been abruptly dampened” by the latest Sentix data. Lockdown measures in Germany and Austria are “putting a considerable damper on current economic activity”.

It added: “Our basic scenario of a ‘mid-cycle slowdown’, i.e. a consolidation in the middle of a cycle, does not have to be abandoned yet. But the risks are increasing! It is also interesting that our thematic analysis reveals an increasingly negative influence of central bank policy. While a continued expansionary monetary policy is likely to fuel inflation in particular, a shift to a restrictive course would obviously be burdened by liquidity constraints. The ECB thus seems to be definitively ‘behind the curve’. The risks for markets and the economy are increasing.

Germany factory orders dropped sharply by -6.9% mom in October, much worse than expectation of -0.2% mom decline. Not including major orders, a 1.8% decrease in new orders in manufacturing was recorded.

Looking at some details, domestic orders rose 3.4% mom. Foreign orders dropped -13.1%. New orders from Eurozone dropped -3.2% mom. The fall in new orders from other countries amounted to 18.1% in the current month (last month +15.7%), influenced by the absence of major orders in the sector of manufacture of machinery and equipment.

AUD/USD recovers mildly today but outlook remains unchanged. Intraday bias stays on the downside with focus on 0.6991 key structural support. Sustained break there will carry larger bearish implication. Next target is 100% projection of 0.7890 to 0.7105 from 0.7555 at 0.6770. On the upside, break of 0.7172 resistance will indicate short term bottoming and bring stronger rebound. 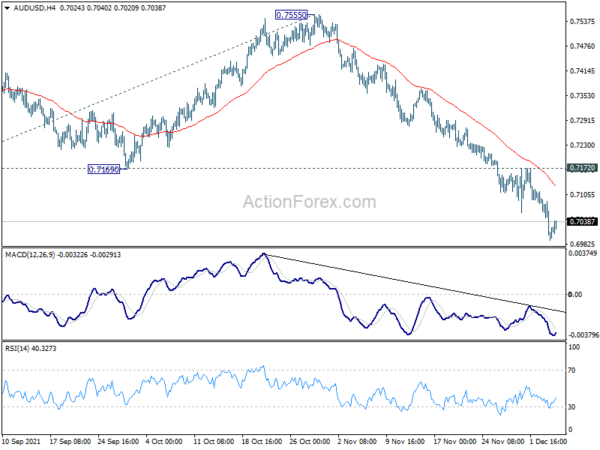 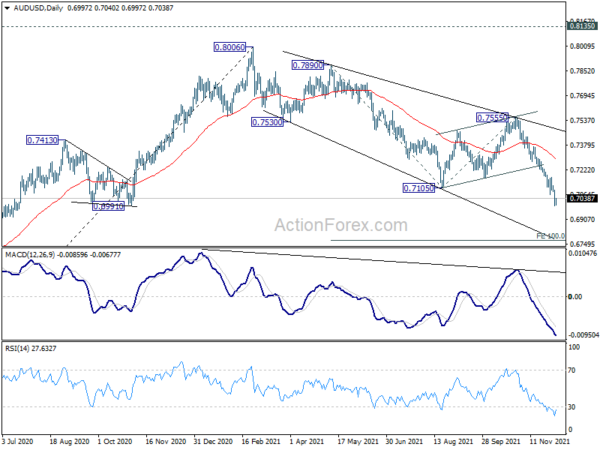