Commodity currencies are under broad-based pressure today, as markets are trading in risk-off mode on the spread of Omicron. Canadian Dollar is leading the way lower as WTI oil tumbles below 70. But Euro and Swiss Franc are currently the main beneficiaries, followed by Yen. Dollar and Sterling are mixed.

Technically, EUR/CAD’s break of 1.4580 support turned resistance now suggests short term bottoming after 1.4162. Stronger rise would now be seen back towards 1.5096 resistance. At the same time, CAD/JPY is pressing 9768 support and break will resume whole decline from 93.00. USD/CAD’s rise from 1.2286 is also resuming by breaking 1.2935 resistance. We’ll see if Canadian Dollar’s selloff would pick up momentum again. 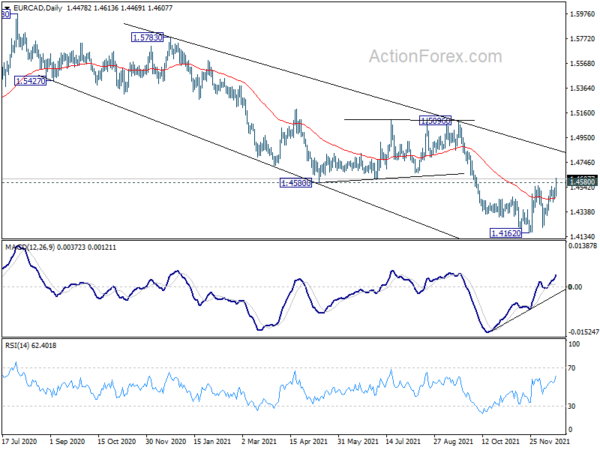 Oil prices dip today on concern that the rapid spread of Omicron would push more countries back into restrictions, and hurt demand at least in the near future. That’s also in-line with overall risk-off sentiment in the markets.

WTI’s recovery from 62.90 was choked off after hitting 73.66 and it’s back below 69. For now, unless there will be any disastrous development, we’re seeing price actions from 85.92 high as development into a sideway consolidation pattern, in form a a three-wave flat, or a five-wave triangle. The range should be set inside 61.90/85.92. 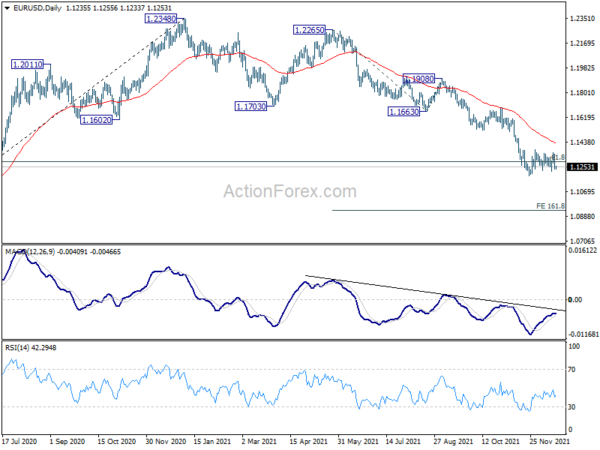 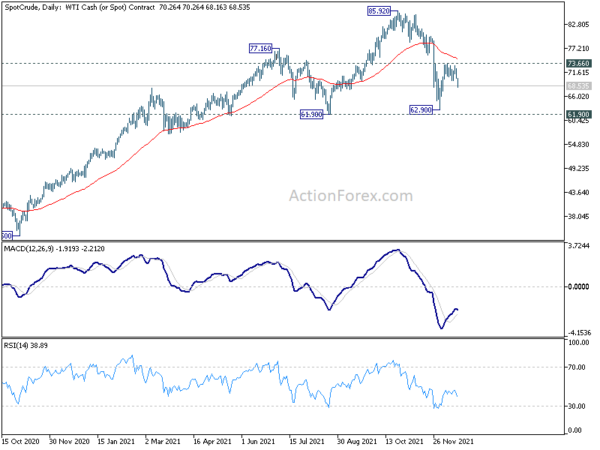 German Finance Minister Christian Lindner said said today that he and Federal Chancellor Olaf Scholz proposed Joachim Nagel as the new Bundesbank President. Nagel, a former Bundesbank board member, is expected to take over on January 1 from Jens Weidmann.

Linder said on twitter, “In view of inflation risks, the importance of a stability-oriented monetary policy is growing. He is an experienced personality who ensures the continuity of #Bundesbank”.

“Nagel can be trusted to continue the German Bundesbank tradition in the debates in the ECB,” Friedrich Heinemann, an expert at the ZEW economic research institute hailed. “He has extensive monetary policy and financial expertise, which is essential for today’s complex monetary policy decisions.”

BoJ Governor Haruhiko Kuroda said today, “there’s quite a distance from the 2% inflation target. It is still too early now to consider normalizing policy.” “Unlike the Western countries, inflation is extremely low and inflation expectations remain very low,” he added. “We’re in a phase to patiently continue large-scale monetary easing.”

BoJ’s balance sheet has grown the equivalent of 135% of GDO . But Kuroda said “I don’t think expansion of the BoJ’s assets will affect our ability to keep monetary policy and financial system stable.” Though, he added it’s important for the government market confidence on the country’s fiscal health in the medium- to long-term.

USD/CAD’s breach of 1.2935 suggests resumption of 1.2286. Intraday bias is back on the upside for 1.2947 resistance, and then 1.3022 key medium term fibonacci level. Sustained break of 1.3022 will carry larger bullish implications. On the downside, break of 1.2762 support is needed to indicate short term topping. Otherwise, outlook will stay bullish in case of retreat. 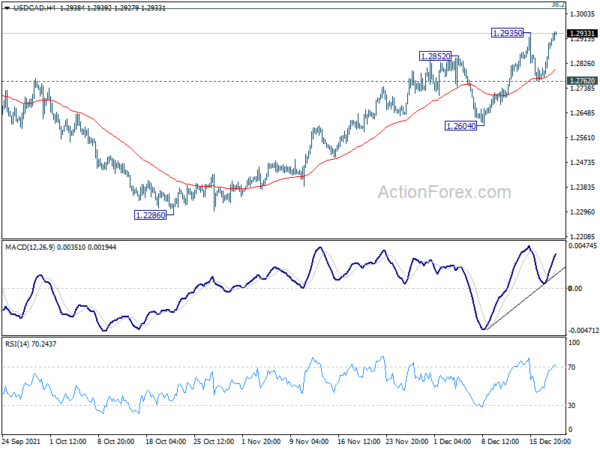 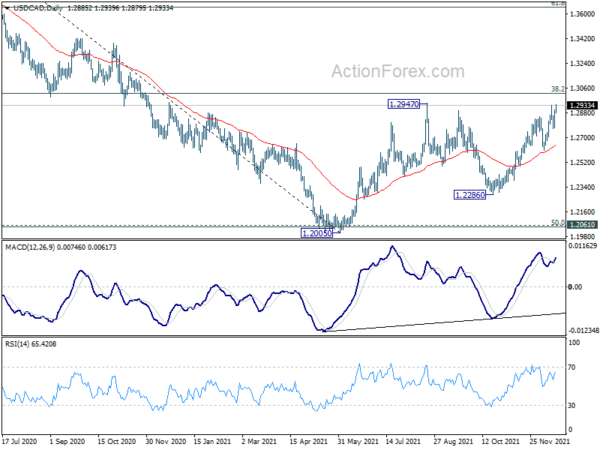