Sterling and Euro are trading broadly higher today, together with Aussie. On the other hand, Yen and Dollar are both under some selling pressure. Rebound in Europe yield is a factor in driving the markets. We’ll see if there is further rally in stocks before holidays that could push Dollar and Yen further lower.

Technically, GBP/CAD’s rally today should confirm that 1.7111 resistance is firmly taken out. Whole fall from 1.7884 has completed with three waves down to 1.6636. Further rally should be seen to 1.7623 resistance first, and possibly further to retest 1.7884. We’ll see if GBP/USD would follow and break through 1.3373 resistance. 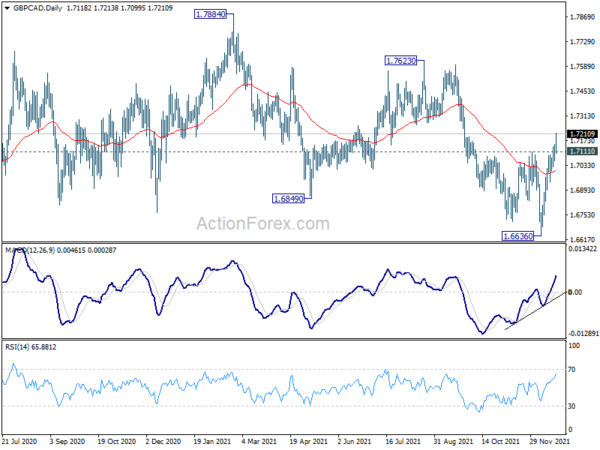 US Q3 GDP growth rate was finalized at 2.3% annualized, revised up from 2.1%. The update primarily reflects upward revisions to personal consumption expenditures (PCE) and private inventory investment that were partly offset by a downward revision to exports. Imports, which are a subtraction in the calculation of GDP, were revised down.

ECB Schnabel: A week Q4 to spillover to beginning of next year

ECB Executive Board member Isabel Schnabel said in an interview, “in general, I think the recovery continues”. But due to new wave of infections, “we are seeing headwinds in the short term”. ECB is looking at a “weaker fourth quarter” which is “likely to spill over to the beginning of next year”. But she expected “a strong rebound thereafter”. So, “we see the recovery as being delayed rather than derailed.”

She added that the factors that pushed up inflation are “likely to either reverse or at least become less pronounced over the coming year”, including supply bottlenecks, energy prices and base effects. Inflation is going to “decline over the course of next year”, but ECB is “less certain about how fast and how strong the decline will be”.

Schnabel also said ECB is taking a “step-by-step approach to normalization” of monetary policy”. The pace can be adjusted to the incoming data. And, “we need to retain optionality to make sure that we sustainably reach our 2% target.”

In the minutes of October 27-28 meeting, BoJ said “yen had depreciated somewhat significantly against both the U.S. dollar and the euro, mainly due to rises in U.S. and European interest rates”. Members have discussed the impact of the yen’s depreciation.

Some members said, “the depreciation had positively affected Japan’s economy as a whole through an increase in profits from business conducted overseas and a rise in stock prices, although its effect of pushing up exports had declined.”

One member said, “the effect of the depreciation on each economic entity was uneven, depending on industry and size”. Another member noted, “while prices had increased recently, triggered mainly by the yen’s depreciation, it was unlikely at present that heightened inflationary pressure would reduce the economic welfare of Japan as a whole.”

The six month annualized growth rate in Westpac-Melbourne Institute Leading Index rose from -0.5% to -0.2% in November. The index has been in negative territory for three consecutive months, partly reflecting the lockdowns in New South Wales and Victoria. Nevertheless, reopening rebounds should eventually lift growth back above trend.

Westpac said both itself and the RBA “currently believe that Omicron will not derail the recovery although the next month will determine the extent of the delay and uncertainty.” 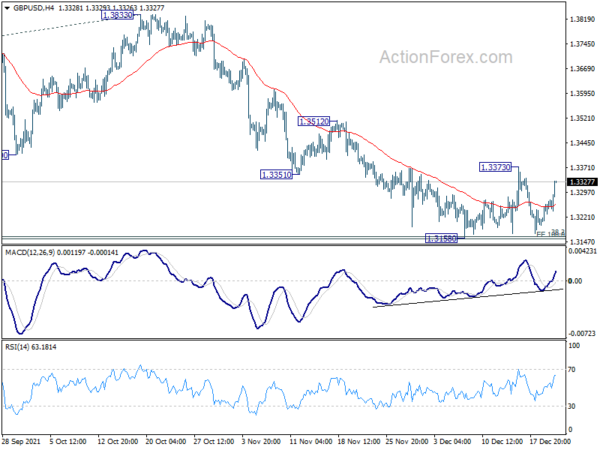 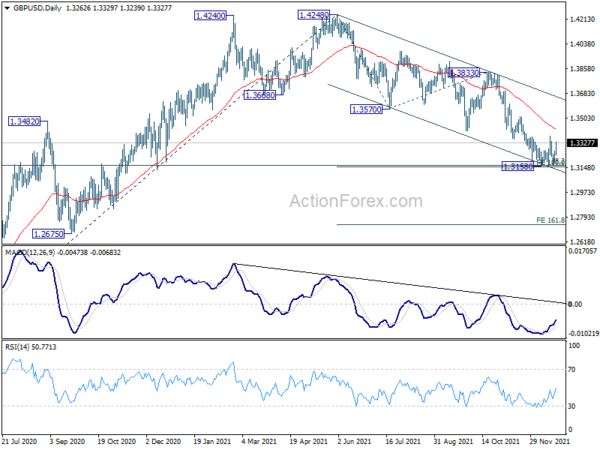