Investor sentiment was basically destroyed by more hawkish than expected Fed Chair Jerome Powell. US stocks reversed earlier gains and closed mixed. But futures are already pointing to a gap down open today. Major Asia indexes are trading in deep red. Markets are now expecting as many as five rate hikes this year starting March.

In the currency markets, Dollar is currently the strongest one for the week, followed by Yen. New Zealand Dollar is the worst, followed by Aussie. Canadian Dollar is just mixed as partly support by BoC hike expectations and rally in oil prices. European majors are mixed for now.

Technically, focus is quickly back on 1.1185 low in EUR/USD. Firm break there will confirm resumption of larger down trend from 1.2348. At the same time, we’ll monitor the momentum of some Dollar pairs towards corresponding level. They 1.3158 low in GBP/USD, 0.6992 low in AUD/USD, and 1.2963 high in USD/CAD. By the way, NZD/USD has broken equivalent level of 0.6700 earlier this week already.

NASDAQ rejected by 14k after hawkish Fed, risks heavily on the downside

US stock markets tumbled sharply overnight and futures dive further in Asian session. Fed Chair Jerome Powell sounded very hawkish during the post meeting press conference. The indication that rate hikes would start in March wasn’t much of a surprise. But Powell indicated that every meeting in “live” and refused to rule out 50bps hikes. Some economists are now forecasting as many as five hikes this year.

On inflation, Powell also warned “are still to the upside in the views of most FOMC participants, and certainly in my view as well”. And, “there’s a risk that the high inflation we are seeing will be prolonged. There’s a risk that it will move even higher. So, we don’t think that’s the base case, but, you asked what the risks are, and we have to be in a position with our monetary policy to address all of the plausible outcomes,” 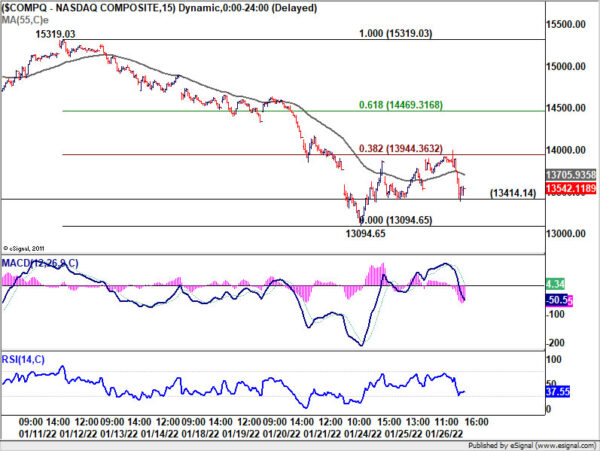 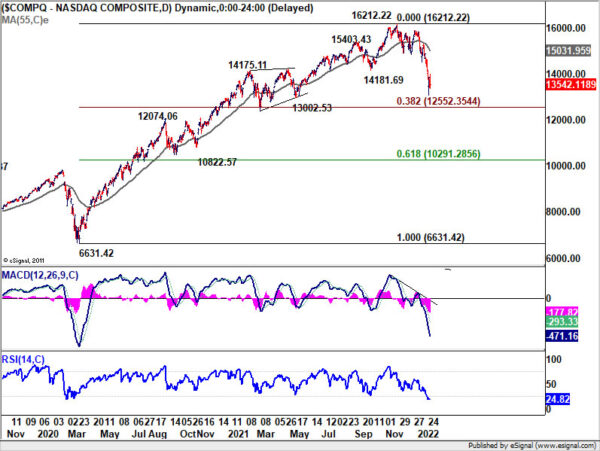 Gold dropped sharply overnight following broad based Dollar strength. The development now raises the chance that rebound from 1752.32 has completed with three waves up to 1853.70 Immediate focus is now on 1805.59 support. Firm break there should add more credence to this bearish case and send Gold through 1782.48 to 1752.32 support. 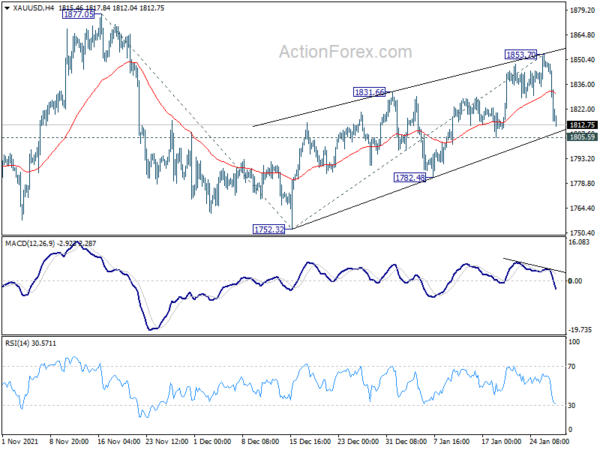 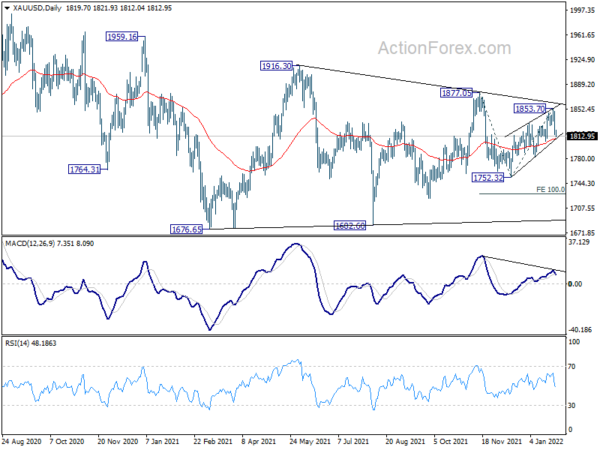 “New Zealand is not alone, with many other OECD countries experiencing higher inflation than in recent decades,” consumers prices senior manager Aaron Beck said. “Price increases were widespread with 10 out of 11 main groups in the CPI basket increasing in the year, with only the communications group decreasing.”

The data reinforces the case for RBNZ to raise interest rate in February. Westpac is forecasting a series of OCR hikes over the coming year with cash rat peaking at 3% in 2023. But New Zealand Dollar tumbles broadly following deep risk-off sentiment.

The strong break of medium term falling channel support indicates downside acceleration. Fall from 0.7463 could be a correction to up trend from 0.5467, or a impulsive down trend itself. In either case, NZD/USD would target 61.8% retracement of 0.5467 to 0.7463 at 0.6229 before making a bottom. 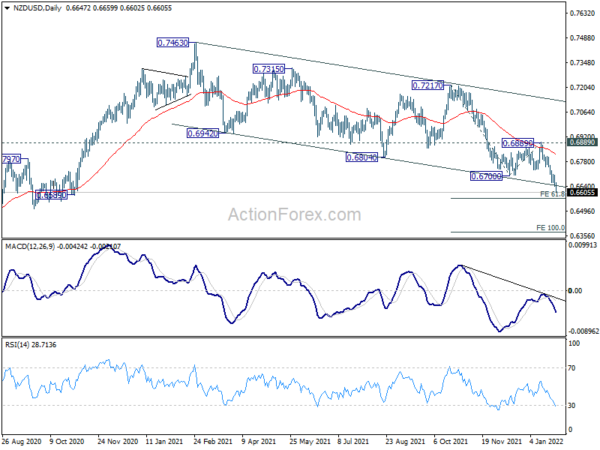 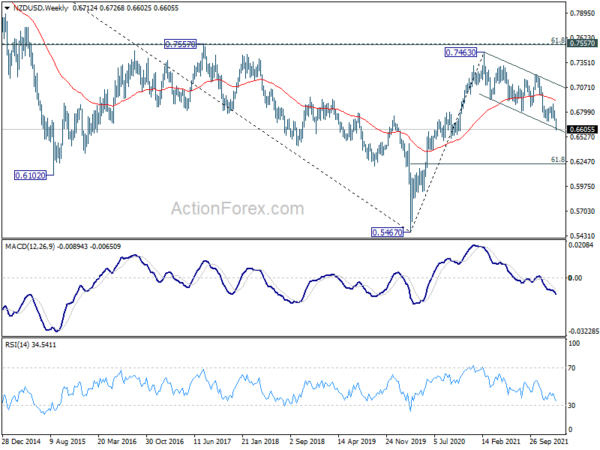 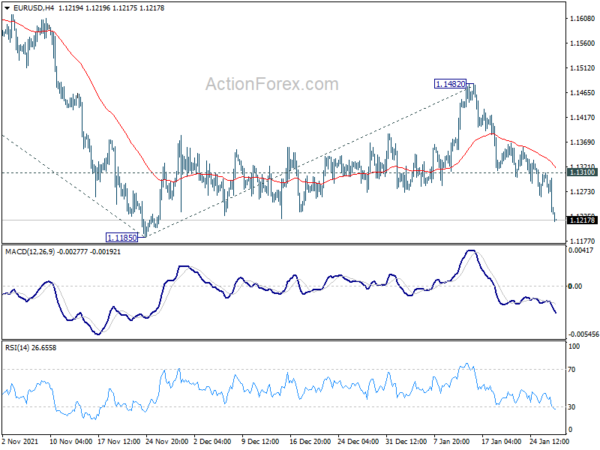 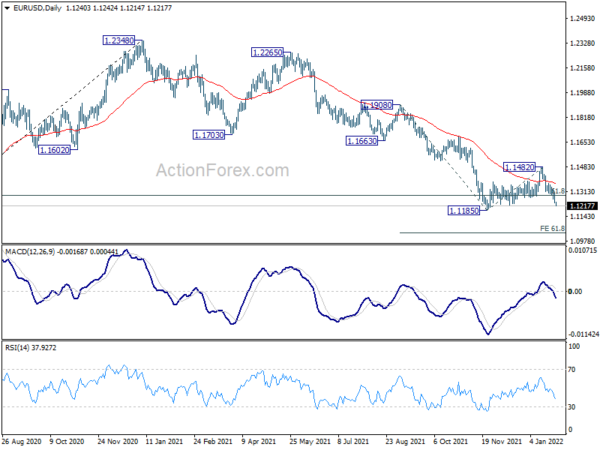