It was a week a surprises. While BoE delivered that a 25bps hike, four of the nine MPC members have indeed voted for a 50bps raise. However, there was no follow through buying as BoE indicated only “modest” tightening would follow. Also, the event was overshadowed by ECB’s unexpected hawkish turn. Then, after US ADP report set up rather low expectation for non-farm payroll, NFP hit the markets with a bang.

Still, Dollar ended as the worst performing one even though it tried to strike a late come back. Yen was the second worst, followed by Canadian Dollar. Euro was the runaway winner, followed by Australian and then New Zealand Dollar. Sterling just ended mixed with Swiss.

The biggest surprise last week was ECB’s hawkish turned. In the post meeting press conference, President Christine Lagarde declined to repeat her guidance that rate hike was “very unlikely” this year. Then, Governing Council member Olli Rehn was quoted on Friday that “if there are no setbacks in the pandemic or the geopolitical situation, it would logical for the ECB to hike its key interest rate at latest next year.” Markets are now expecting the deposit rate to be raised from the current -0.50% to 0.00% by year end, even though the opinions on timing differ.

Euro was the runaway leader last week. EUR/USD’s break of of the medium term channel resistance is a bullish sign, together with bullish convergence condition in daily MACD. Immediate focus is on 1.1482 resistance this week. Firm break there will confirm medium term bottoming at 1.1120, and raise the chance of trend reversal. Further rise should then be seen to 38.2% retracement of 1.2348 to 1.1120 at 1.1589 next. 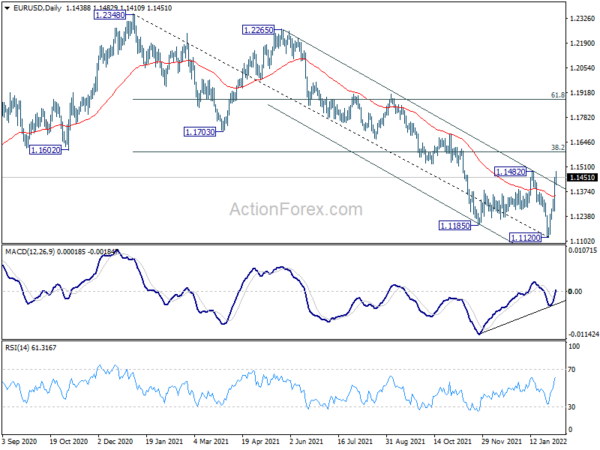 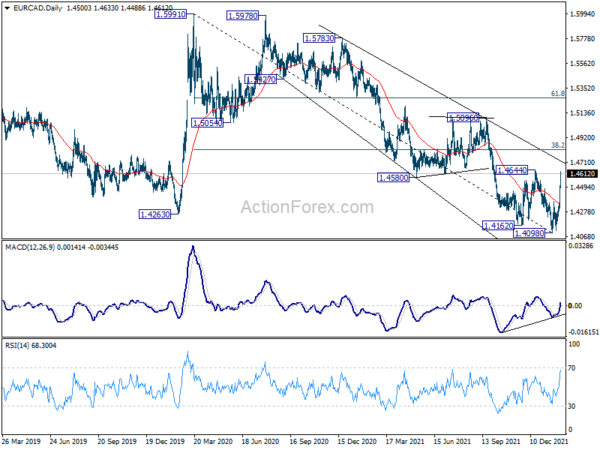 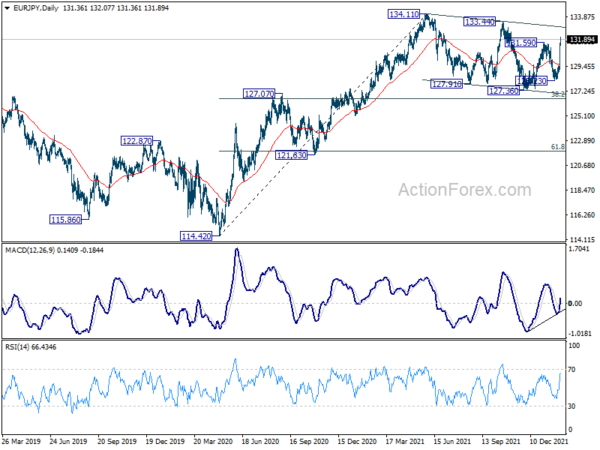 EUR/GBP’s strong break of 0.8241 resistance and and 55 day EMA indicates medium term bottoming at 0.8282, on bullish convergence condition in daily MACD, just ahead of 0.8276 key long term support (2019 low). Next focus will be 0.8598 resistance. Sustained break there will argue that whole down trend from 2020 high at 0.9499 is finished too, and turn medium term outlook bullish. 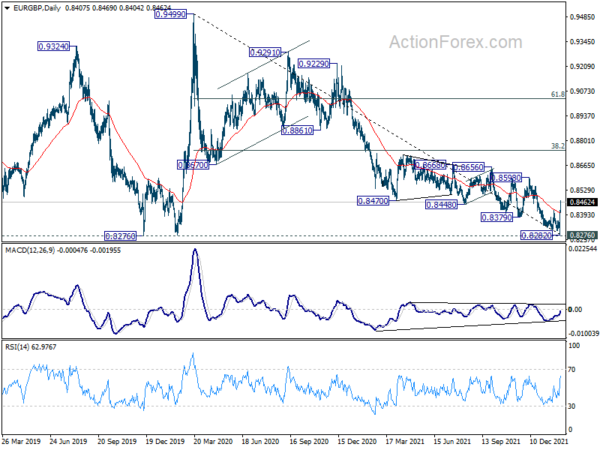 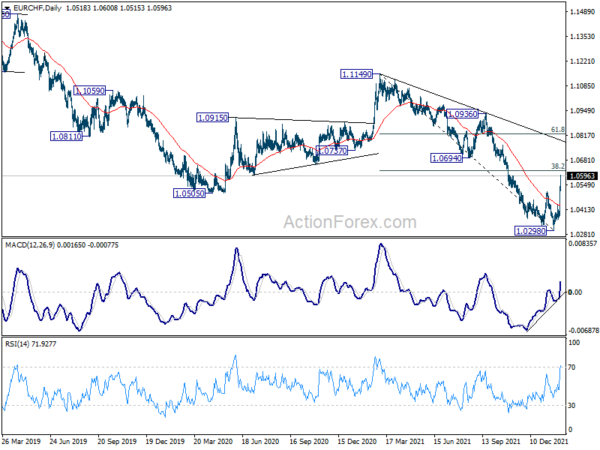 Another big surprise last week was the much stronger than expected non-farm payroll report, which saw large job growth and faster wages growth. There are some speculations that Fed would start the tightening cycle in March with a 50bps hike. Yet, for now, the base case is still for Fed to deliver consecutive 25bps hike at the upcoming meetings. That would give policymakers more flexibility to wait-and-see how inflation develops.

Though, the March 15-16 FOMC meeting is more than a month away and many things could happen in between, starting with January CPI data to be featured this week. If inflation outlook does worsen much further, it would be hard for Fed to not acting quick and heavy.

US stocks remained pretty resilient in spite of heightened expectation on Fed’s stimulus removal. For now, DOW is seen as in a consolidation pattern to the rise from 26143.77 only, not that from 18213.65. Such consolidations should extend for a while with another falling leg before completion. That is, in case of stronger rebound, break of 36952.65 high is not envisaged. In case of another fall, stronger support should be seen at 38.2% retracement of 26143.77 to 36952.65 at 32823.65 to bring rebound. 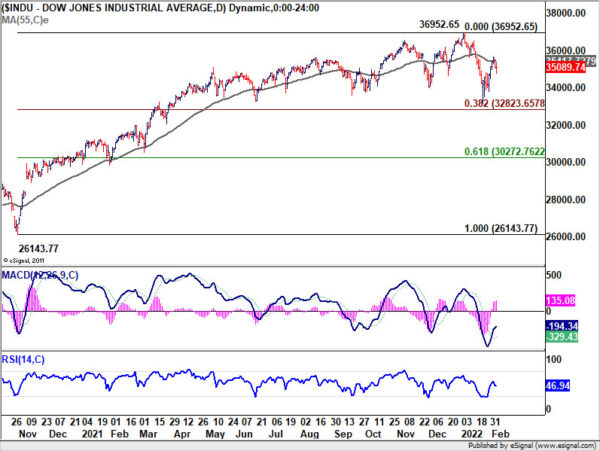 US 10-year yield surged, so did others 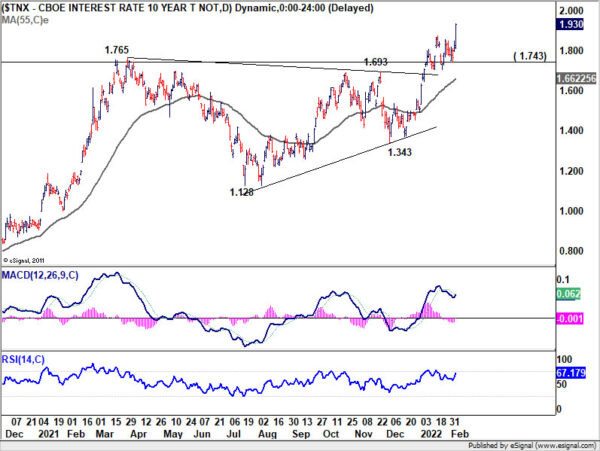 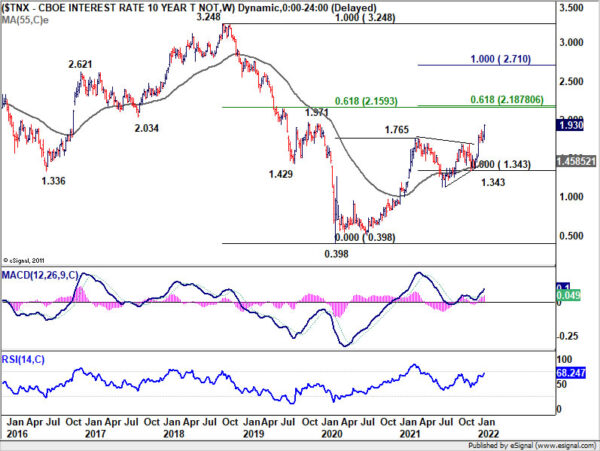 Meanwhile, it should be noted that US benchmark yields could provide little support to the greenback for now. As other major global yields are also on the way up. Germany 10-year bund yield has finally turned positive with some conviction and closed at 0.210, highest since early 2019. 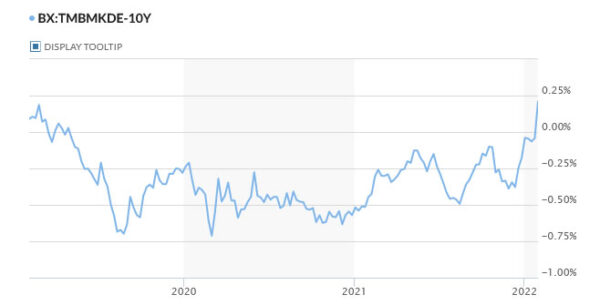 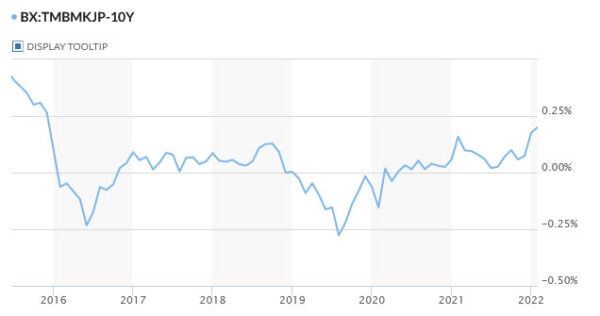 Dollar index basically followed the move in EUR/USD last week. The steep decline indicates that a short term top is at least formed at 97.44. The biggest question is whether it’s already rejected by key resistance at 61.8% retracement of 102.99 to 89.20 at 97.72.

On the downside, sustained break of trend line support at around 95.00 will argue that it’s at least correcting the whole up trend from 89.20. Deeper decline would be seen through 94.62. Reactions to 55 week EMA (now at 94.02) would reveal whether the medium term trend has reversed. 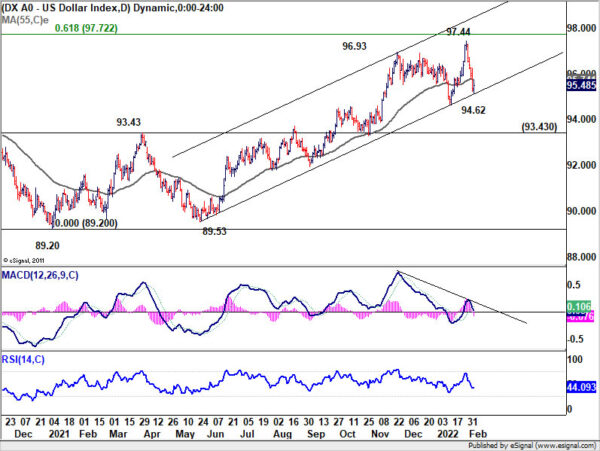 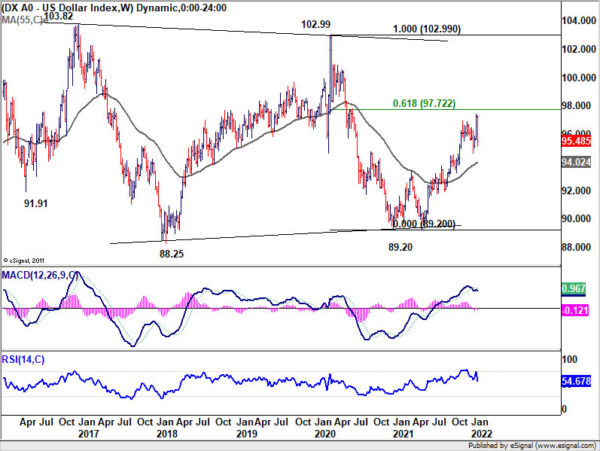 GBP/JPY’s rebound from 152.88 extended higher last week, but lost momentum after hitting 156.48. Initial bias is neutral this week first. The consolidation pattern from 158.19 could still extend further. On the downside, below 154.46 minor support will turn bias back to the downside for 152.88 support and below. Nevertheless, above 156.48 will target a test on 157.74/158.19 resistance zone. Decisive break there will resume larger up trend. 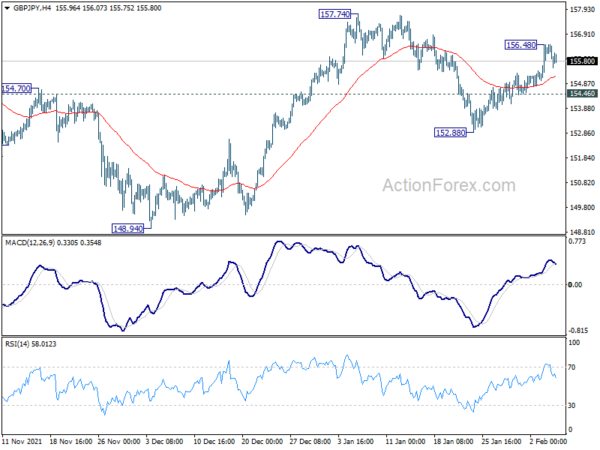 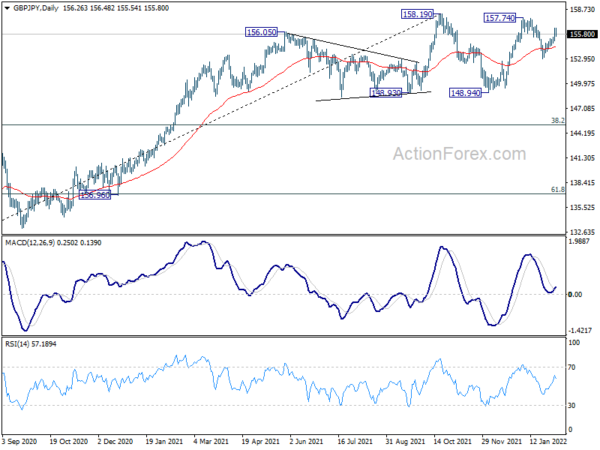 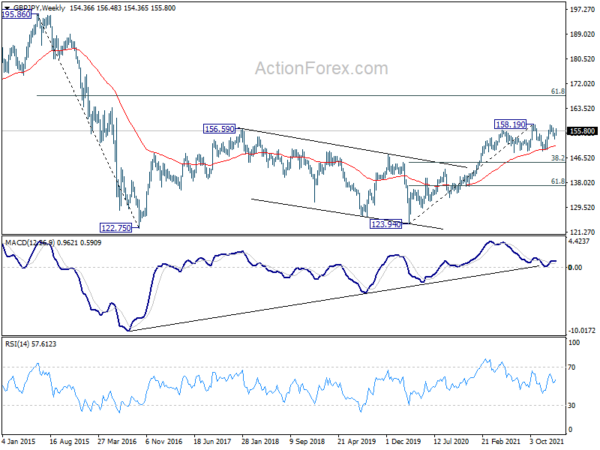 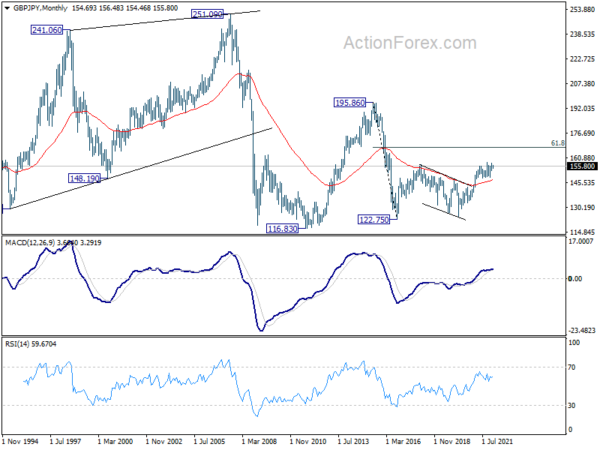