Euro, European Stocks and Yields in Free Fall as WW III is Near

Russia invasion of Ukraine continued last week and risk aversion intensified sharply after Russia’s attempt to attack Zaporizhzhia nuclear power station. European stocks took a steep dive with benchmark yields. Oil prices surged to levels not seen in more than a decade. Gold was originally steady but staged a late rally, probably as people remembered that it’s a safer asset to hold than cryptos in time of world war III.

In the currency markets, Euro was overwhelming the worst performing one, with Sterling a distant second. While safe-haven flows boosted Swiss Franc, Aussie and Kiwi were the ones benefited most by skyrocketing commodity prices. Dollar ended mixed with Yen

Germany DAX was in free fall last week, and selloff was in particular fierce on Friday after a gap down. The close below the long term fibonacci level at 13220.99 (38.2% retracement of 8225.65 to 16290.19) was a rather bad sign. For the near term, outlook will stay bearish as long as the upper edge of the gap at 13669.10 holds. DAX could continue the decline to 38.2% retracement at 11324.84 before finding a bottom. Meanwhile, a break above 13669.10 will suggest some stabilization and consolidations, before staging another fall. 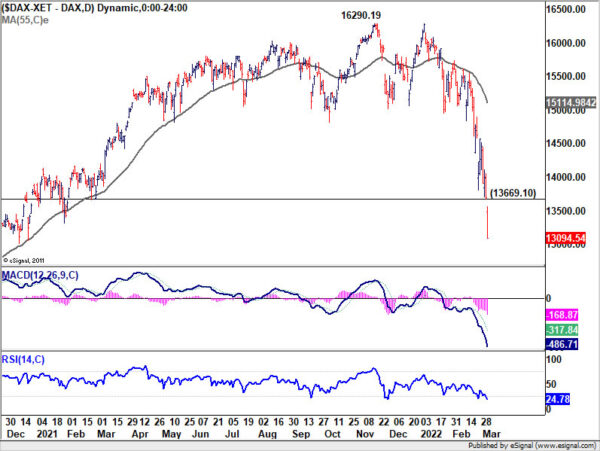 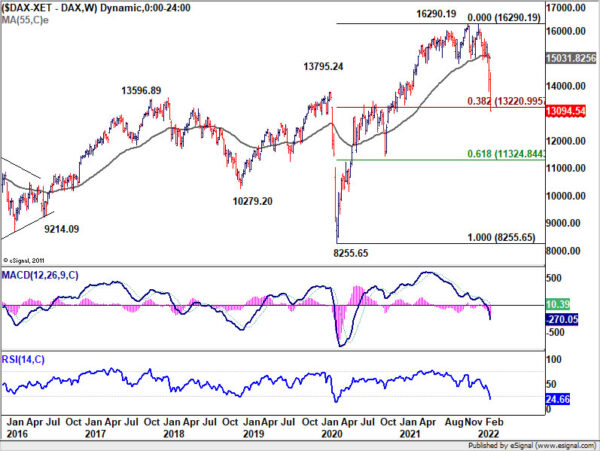 10-year bund yield closed the week down nearly -0.3 to -0.68, turned negative again for the first time since late January. 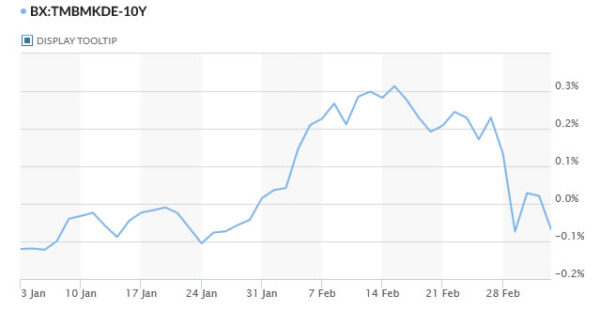 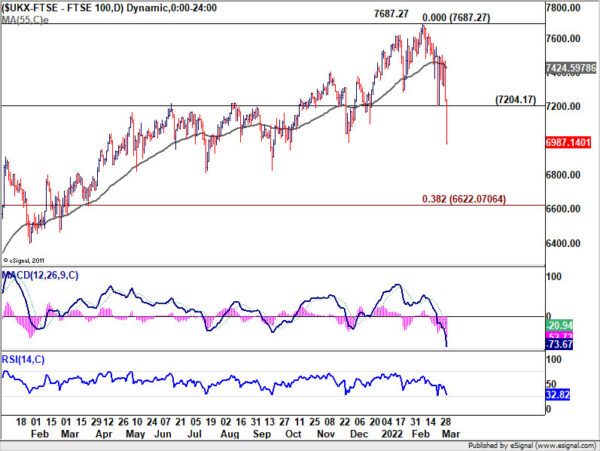 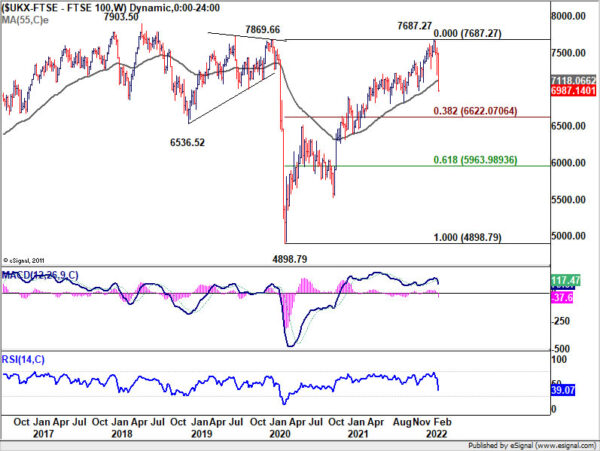 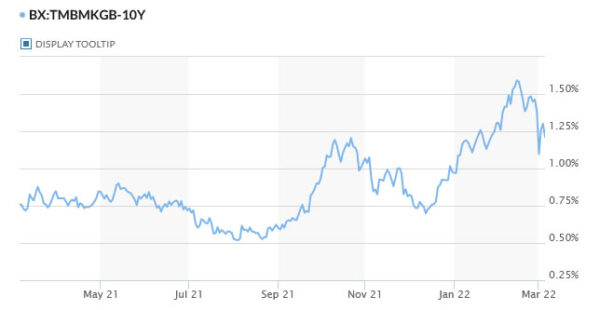 The selloff in US stocks was much less severe, obviously because it’s out of the war zone while traders also pare back expectation of Fed rate hike. Indeed, Fed fund futures now implies 98.8% chance of a 25bps hike only at the March 15-16 FOMC meeting, with 1.2% chance of Fed standing pat. 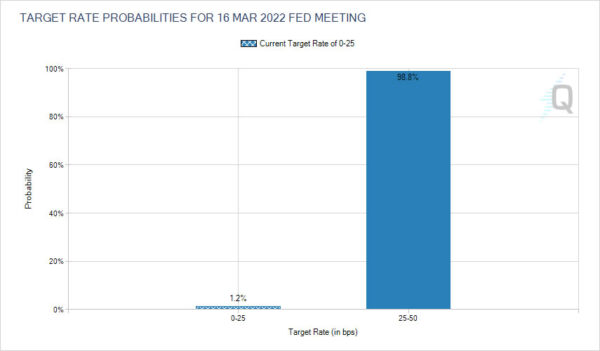 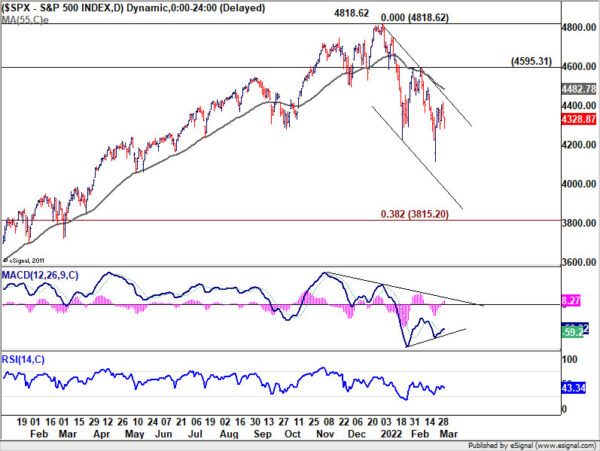 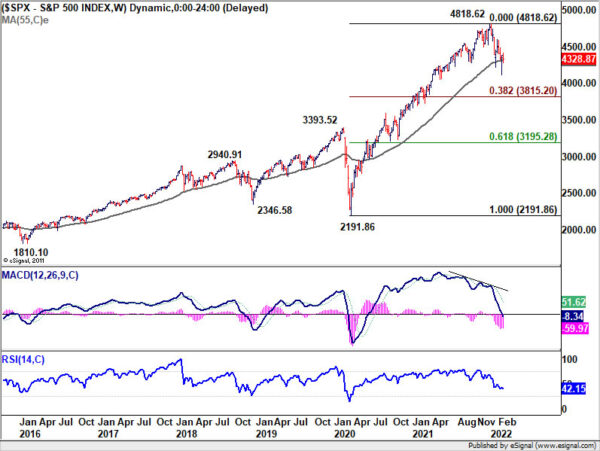 Dollar index surged to close at 96.84, thanks to Euro’s ultra-weakness. Near term outlook will now stay bullish as long as 96.93 resistance turned support. Immediate focus in channel resistance at around 99.00. Sustained break there will be a sign of upside acceleration. 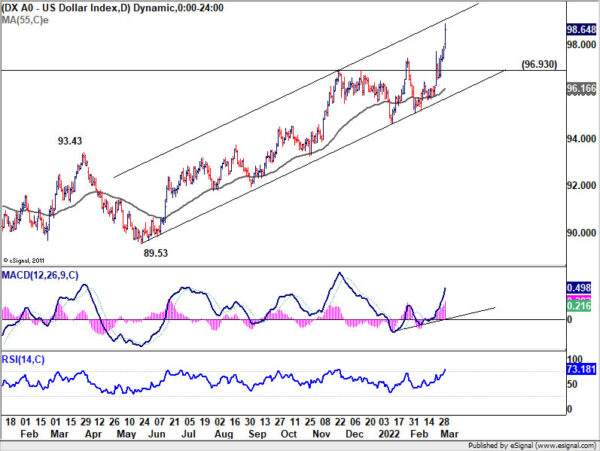 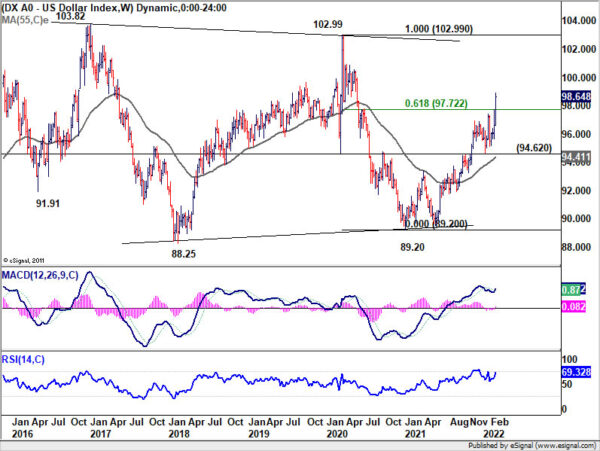 Gold’s late rally argues that correction from 1974.32 has completed after drawing support from 1877.05 resistance turned support. The buying might have come as people realized that Gold is a better asset to hold than cryptos in real war. 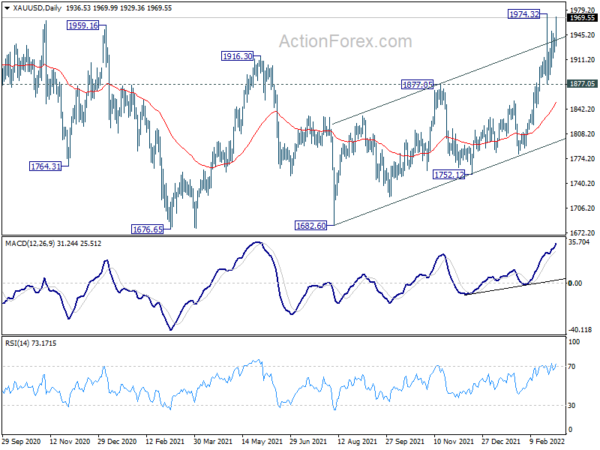 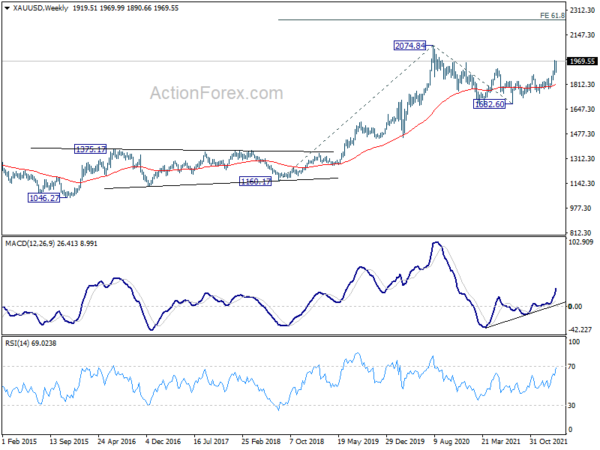 However, there is so far no sign of topping yet, and further rise is expected as long as 102.19 support holds. Sustained trading above 115.32 could prompt even more upside acceleration, as so in a fear-driven move in commodity markets. That’s just like the dive to negative at the start of the pandemic.

In that case, next target will be 161.8% projection at 147.71. For those who’ve be around long enough, it’s not something unthinkable. It’s just the high reached back in 2008, not that long ago. 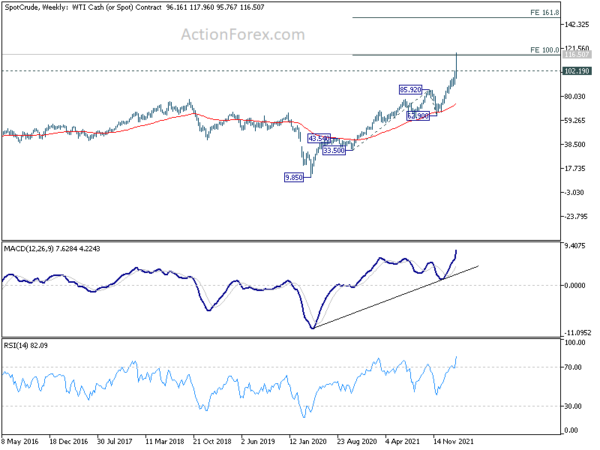 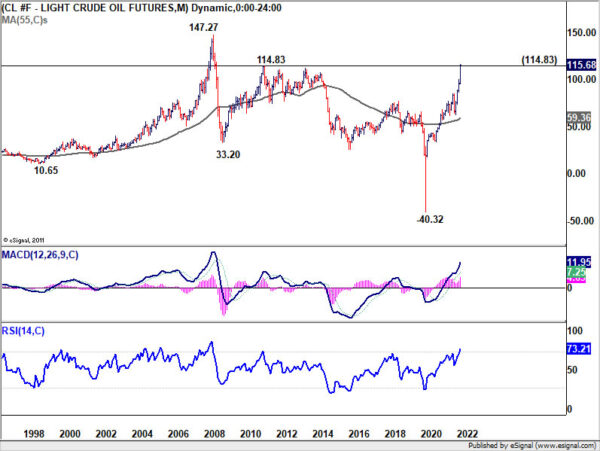 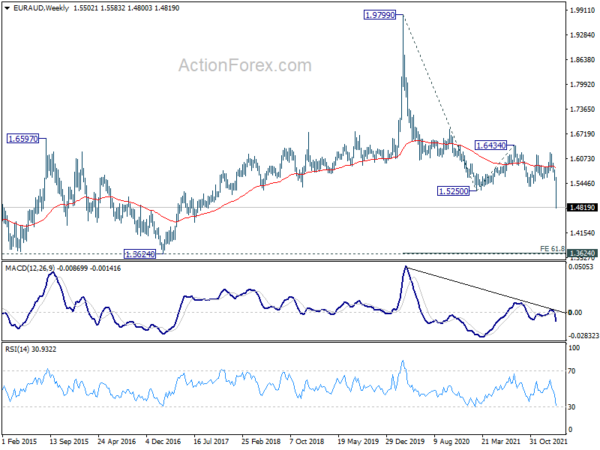 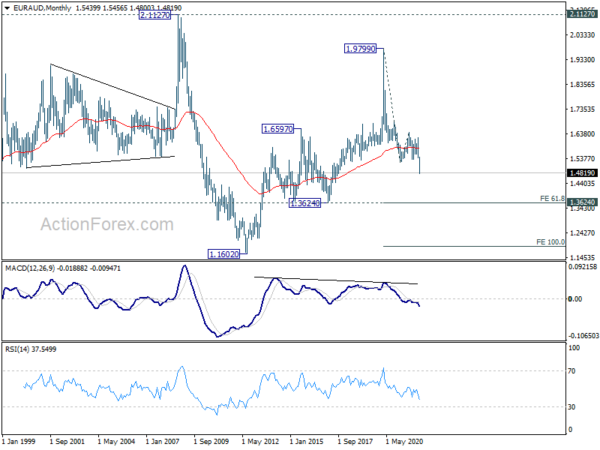 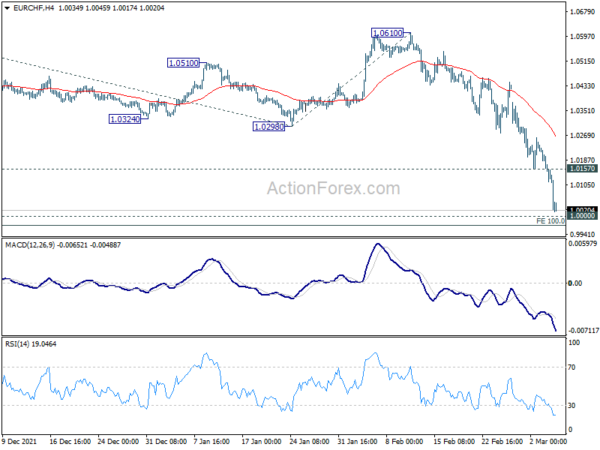 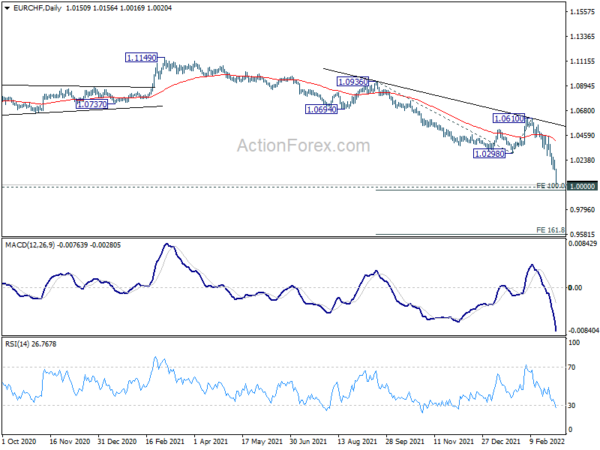 In the long term picture, capped below 55 month EMA, EUR/CHF is seen as extending the multi-decade down trend. There is no prospect of a bullish reversal until some sustained trading above the 55 month EMA (now at 1.0909). 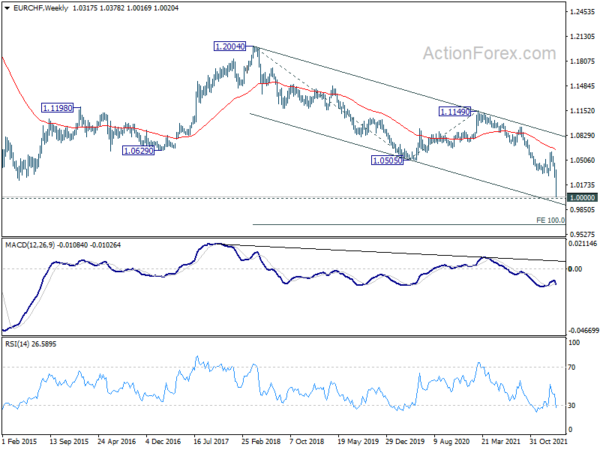 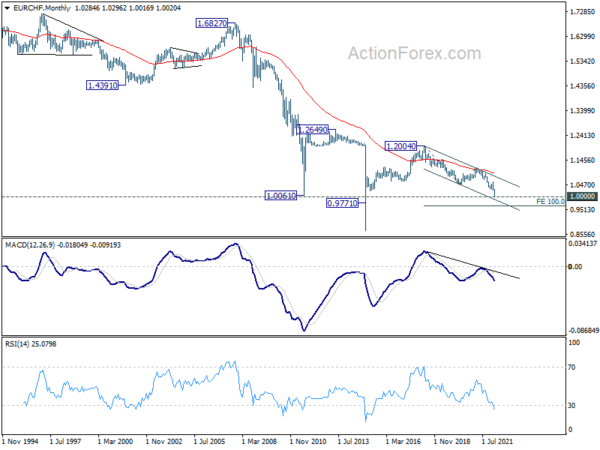