Overall markets are mixed in Asia today. While stocks in Hong Kong are suffering renewed selling, Japan and Singapore are steady. Gold is lifted by general weakness in Dollar. Yen’s selling looks more and more exhausted even though it’s still the worst performing one for the week, followed by Euro and the greenback. On the other hand, commodity currencies are staying firm as led by Aussie. Sterling is mixed and would look into retail sales data for some inspiration.

Technically, Gold’s rebound form 1894.77 resumed by breaking though 1949.55 minor resistance. Further rise should be seen back to 61.8% retracement of 2070.06 to 1894.77 at 2003.09, which is close to 2000 handle. It’s still early to conclude the pattern from 2070.06 has completed. Thus, price actions would remain choppy and directionless from a larger point of view. Nevertheless, the development could be an indication of some weakness in Dollar. Focus would turn to see if EUR/USD could break through 1.1120 with some conviction to confirm. 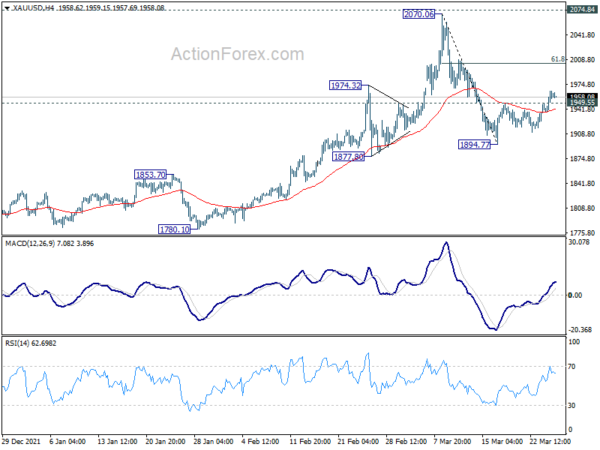 “We want to be careful, we want to be humble and nimble, and get to neutral before too long — maybe 50 helps, I’m open to that,” he said in a Q&A session after a speech. “I would be comfortable with each meeting increasing by a quarter point.”

“This is a signal of more general pressure from aggregate demand on today’s impinged supply,” he said in the speech. “If monetary policy did not respond to these broader pressures, we would see higher inflation become embedded in inflation expectations, and we would have even harder work to do to rein it in.”

“Policymakers need to be cautious, humble, and nimble as we navigate the course ahead,” Evans said. “Monetary policy is not on a preset course” but will be decided at each Fed meeting.

ECB Executive Board member Isabel Schnabel said yesterday that it had “left the door ajar” for more asset purchases if the impact of Russia invasion of Ukraine turn out to be much worse.

“If we now fall into a deep recession due to the Ukraine crisis, we’ll have to rethink that,” she said. “Otherwise, we’ll end the bond purchases in the third quarter and as soon as we’ve done that we can raise rates at any time depending on how inflation develops.”

Separately, Governing Council member Mario Centeno emphasized “normalization of the ECB’s monetary policy will be carried out gradually and proportionally at the end of this year”.

BoJ Governor Haruhiko Kuroda told the parliament, “there’s no change now to my view a weak yen is generally positive for Japan’s economy.”

He also reiterated the view that “cost-push inflation that is not accompanied by wage hikes will hurt Japan’s economy.” And as such, “it won’t lead to sustained achievement of our price target. That’s why the BOJ will continue to maintain powerful monetary easing.”

Released from Japan, Tokyo CPI core rose from 0.5% yoy to 0.8% yoy in March, above expectation of 0.7% yoy. Corporate service price index rose 1.1% yoy in February, below expectation of 1.2% yoy.

UK Gfk consumer confidence dropped to -31, a wall of worry is confronting

Joe Staton, Client Strategy Director GfK, says: “A wall of worry is confronting consumers this month and there is an unmistakable sense of crisis in our numbers. Consumers across the UK are experiencing the impact of soaring living costs with 30-year-high levels of inflation, record-high fuel and food prices, a recent interest-rate hike and the prospect of more increases to come, and higher taxation too – all against a background of stagnant pay rises that cannot compensate for the financial duress. This is the fourth month in a row that UK consumer confidence has dropped.”

AUD/USD’s rally resumed after brief retreat and intraday bias is back on the upside for 0.7555 resistance. Decisive break there should confirm that whole corrective decline from 0.8006 has completed at 0.6966. Further raise should then be seen back to retest 0.8005. On the downside, below 0.7465 minor support will turn intraday bias neutral again. 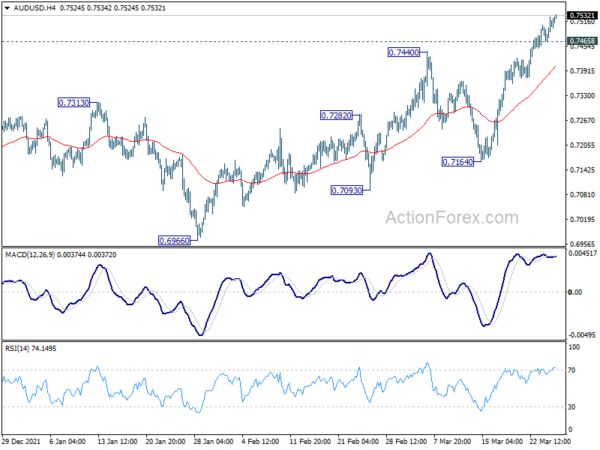 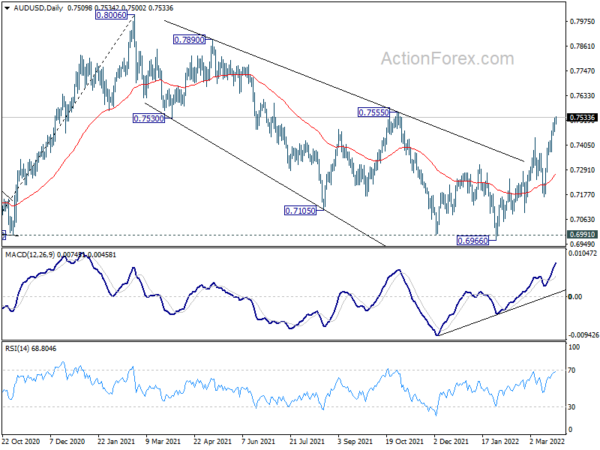