Euro rebounds strongly today as some ECB policymakers continued to talk up the chance of a July rate hike. Canadian Dollar is following as second strongest, continuing to be supported by strong inflation data. Dollar is not performing too badly for now, as third strongest. On the other hand, New Zealand Dollar remains under pressured after CPI missed expectation. Yen is staying in consolidations in general despite decline attempt against some rivals. Sterling and Swiss Franc are mixed, with Aussie. 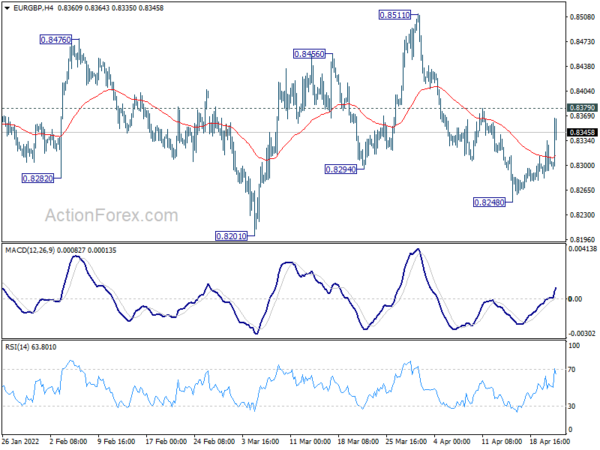 Also released, Philly Fed manufacturing survey dropped from 27.4 to 20.9 in April, below expectation of 20.9.

ECB President Christine Lagarde said in a speech, the impact of the factors driving up inflation currently “should fade over time”. But for the near term, “inflationary risks are tilted to the upside”. Over the medium-term, ” risks to the inflation outlook could arise if wages rise by more than anticipated, longer-term inflation expectations move above target or supply conditions durably worsen”.

But so far, “wage growth has remained muted – despite a strong labour market – and inflation expectations in the euro area stand around our target”.

On monetary policy, Lagarde said it will “depend on the incoming data and our evolving assessment of the outlook”. ECB would maintain “optionality, gradualism and flexibility” in the conduct of monetary policy.

ECB Vice President Luis de Guindos said in an interview, the consequences of invasion of Ukraine are “quite clear”, as higher inflation and lower growth. That should be reflected in in June outlook.

He sees “no reason why we should not discontinue our APP programme in July”. But the timing for the first rate hike will depend on the economic projections. “Nothing has been decided so far,” he said.

“From today’s perspective, July is possible and September, or later, is also possible. We will look at the data and only then decide,” he added. Then, the rate hike cycle will “depend on the data” and the “evolution of inflation.

ECB Wunsch: July rate hike is a scenario to consider

ECB Governing Council member Pierre Wunsch said, “without any really bad news coming from that front, hiking by the end of this year to zero or slightly positive territory for me would be a no brainer.”

Also, Wunsch doesn’t rule out ending the asset purchases in June, and raise interest rate in July. “It’s going to of course depend on data,” he said. “If we have another inflation surprise, it’s certainly a scenario that I would consider.”

“There are of course situations where if the shock is very big on the real economy, we would feel more comfortable looking through the inflation development,” he said. But “we’re still in a situation where we’re supportive in terms of monetary policy. Real rates are today very, very negative. So the beginning of the normalization process should be relatively independent of the real economy.”

“We’re still talking about normalization, but I wouldn’t exclude that at some point, if we have second-round effects, wages going up, that monetary policy would have to become restrictive,” he said. “What’s priced in by the markets today to me is on the low side of what might be required to get inflation under control.”

StatsNZ said: “The main driver for the 6.9 percent annual inflation to the March 2022 quarter was the housing and household utilities group, influenced by rising prices for construction and rentals for housing.”

“Construction firms have been experiencing many supply-chain issues, higher labour costs, and also higher demand, which have pushed up the cost of building a new house,” senior prices manager Aaron Beck said.

EUR/USD breached 1.0922 earlier today but quickly retreated. Intraday bias remains neutral for the moment. On the upside, firm break of 1.0922 should confirm short term bottoming at 1.0756. Intraday bias will be back on the upside for 1.1184 structural resistance next. On the downside, though, break of 1.0756 will resume larger down trend. 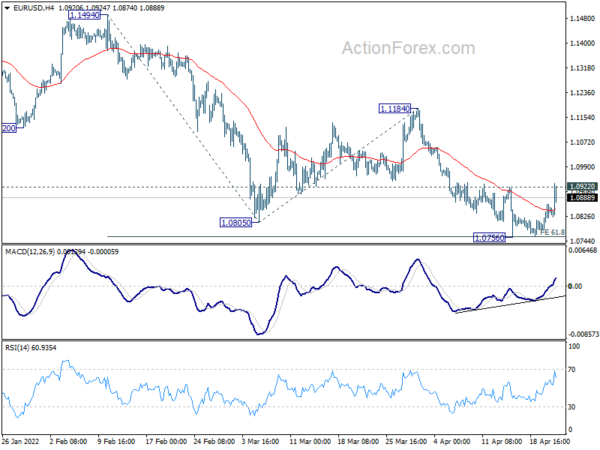 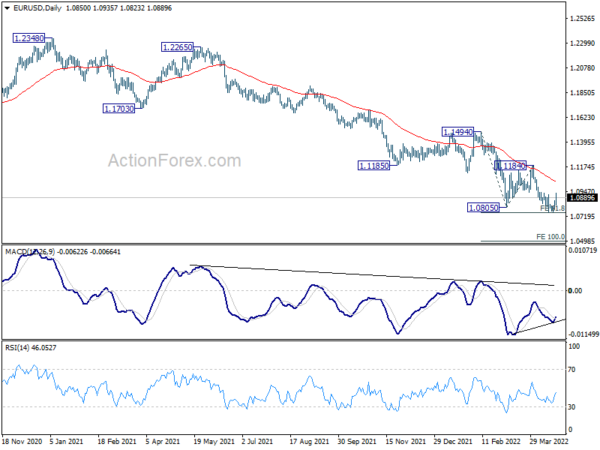