Inflation data were the main drivers in the forex markets in the past 12 hours. New Zealand Dollar turned slightly weaker after Q1 CPI came in lower than expected, despite surging to 30-year high. On the other hand, Canadian Dollar remains supported by the stronger than expected CPI readings released overnight. Dollar’s retreat appears to be relatively brief in general, as it’s regaining some ground against European majors. Yen also turned weaker in very tight range, as it’s now in consolidations.

For now, Loonie is the strongest one for the week, followed by Aussie and then Kiwi. Yen remains the worst, followed by Swiss Franc and then Sterling. Dollar and Euro are mixed. 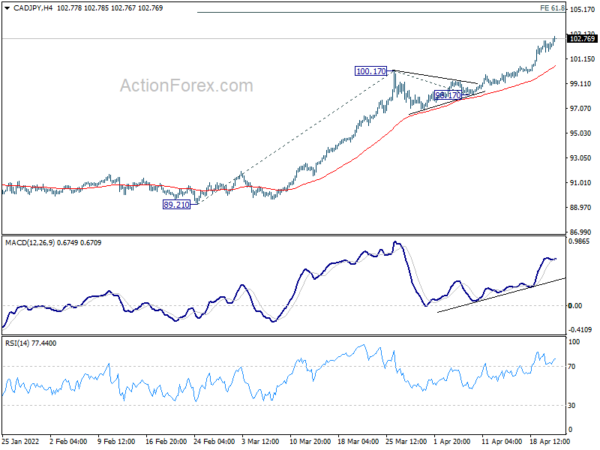 San Francisco Fed President Mary Daly said yesterday that ” an expeditious march to neutral by the end of the year as a prudent path.” And it’s the “top priority” to move “purposefully to a more neutral stance that does not stimulate the economy”

Nevertheless she also emphasized, ,”if we ease on the brakes by methodically removing accommodation and regularly assessing how much more is needed, we have a good chance of transitioning smoothly and gliding the economy to its long-run sustainable path,” she said.

As for the economy, she said, recession is one word, but it describes a whole range of outcomes. It can be a couple of quarters of a tiny bit below zero. That’s a very different beast than something like the financial crisis or the Volcker disinflation period.”

“That’s not something that I’m forecasting or something I think would derail the long-run expansion,” she added.

BoJ announced yesterday another round of bond purchases to defend the 10-year JGB yield cap at 0.25%. It will carry out unlimited purchases through auctions on April 21, 22, 25, and 26, with 0.25% fixed-rate applied.

“Given recent yield movements on longer-ended notes, we have announced a consecutive unlimited fixed-rate purchase of bonds to achieve our policy to guide the 10-year yield around 0%,” the BoJ said in a statement.

Under the yield curve control framework, BoJ intends to keep 10-year JGB yield at 0%, with allowance to move up and down 0.25%.

“As you know, a weak yen hasn’t been bad for Japan,” Panth said. “At the same time, it does affect households. It’s a little bit of a mixed bag,”

“Japan is in a very different situation compared with other advanced countries who have begun tightening monetary policy,” he said. “We do not see any need to change the accommodative monetary policy stance.”

StatsNZ said: “The main driver for the 6.9 percent annual inflation to the March 2022 quarter was the housing and household utilities group, influenced by rising prices for construction and rentals for housing.”

“Construction firms have been experiencing many supply-chain issues, higher labour costs, and also higher demand, which have pushed up the cost of building a new house,” senior prices manager Aaron Beck said.

Eurozone CPI final is the main feature in European session. Later in the day, US will release jobless claims and Philly Fed survey.

Intraday bias in USD/JPY remains neutral for the moment. Consolidation from 129.39 temporary top is extending and deeper retreat cannot be ruled out. But downside should be contained above 125.09 resistance turned support to bring another rally. On the upside, above 129.39 will resume larger up trend to 130.04 long term projection level next. 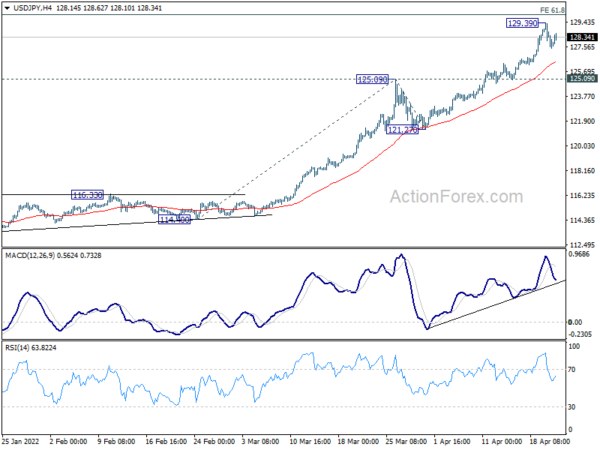 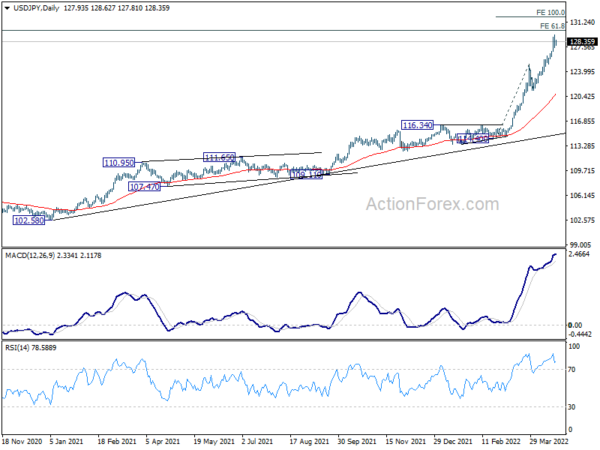