Dollar Powered Up, Fed to Hike 50bps in May and 75bps in Jun?

Speculations on aggressive Fed tightening intensified sharply last week after a chorus of hawkish comments from policy markets. Markets are indeed pricing in near 70% chance of federal funds rate at 1.50-1.75% by the end of first half, i.e., 125bps above current level. Stocks tumbled sharply towards the end, with DOW suffering the worst day since 2020 on Friday.

In the currency markets, Dollar ended broadly higher as the best performer, as supported by both Fed expectations and risk aversion. Euro was the second strongest after some ECB members talked up the chance of a July rate hike. Commodity Aussie and Kiwi ended as the biggest losers. Yen consolidated in tight range while European majors and Loonie were mixed.

There should be a consensus among Fed policymakers on the need to “front-load” some of the rate hikes, to “expedite” to neutral. Whether interest will end up at 2.50% or 3.50% by the end of the year will very much depends on incoming data and developments. But the rate hikes should come in faster and earlier.

Traders added to their bets on a 50bps rate hike by Fed in May, after even Chair Jerome Powell said it’s “on the table”. Fed fund futures are now pricing in 99.6% chance of that, bring interest rate to 0.75-100%, comparing to 66% a month ago. 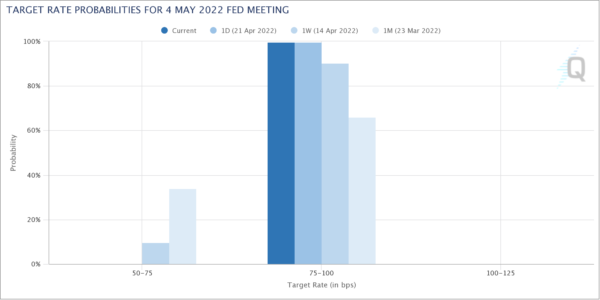 But more importantly, markets are pricing in near 70% chance of interest rate ending at 1.50-1.75% after June meeting (comparing to 0% a month ago). That is, traders are betting on a 75 bps rate hike at the June meeting. That’s pretty aggressive. 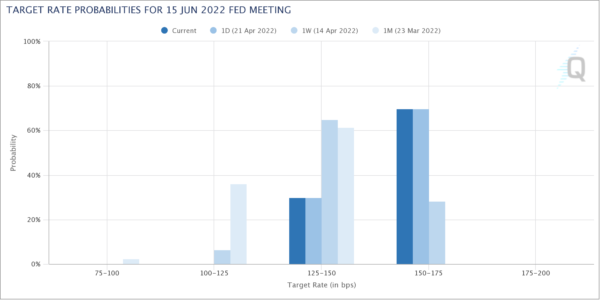 US stocks tumbled sharply towards the end of last week, as investors finally reacted to the speculations of aggressive Fed tightening. The development in S&P 500 suggest that rebound from 4115.65, as the second leg of the corrective pattern from 4818.62, has completed at 4637.30 already. 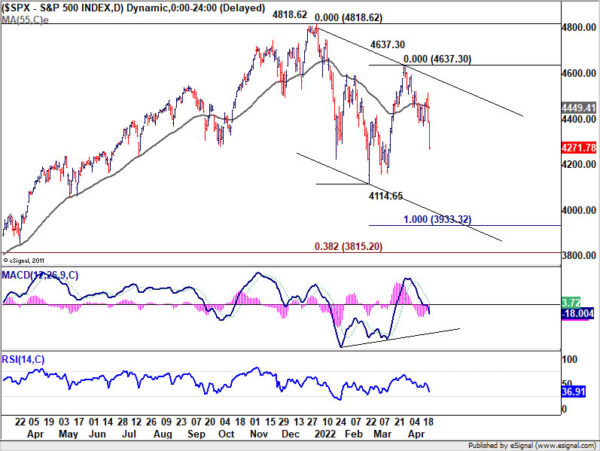 But it should be emphasized that overall outlook isn’t too bearish. Price actions from 4818.62 are seen as correcting the up trend from 2191.86 (2020 low) only. As all the supply chain issues, war, inflation fade, and with monetary policy setting back to prepandemic levels (or a bit tighter), dusts will settle. Downside of SPX’s correction should be contained by 38.2% retracement of 2191.86 to 4818.62 at 3815.20 to bring rebound. 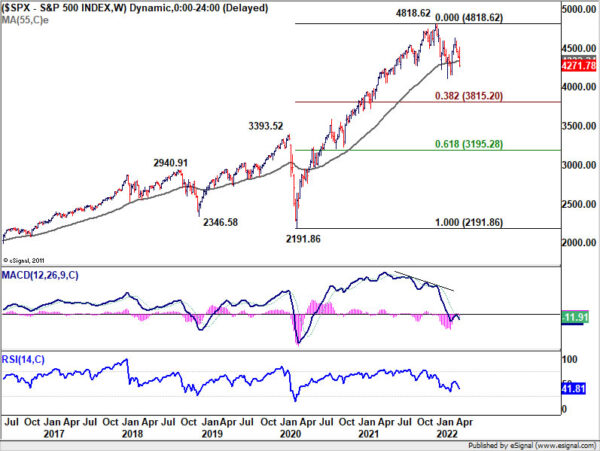 10-year yield extended recent up trend and closed above 2.9 handle at 2.906. While some volatility cannot be ruled out, in any case, near term outlook will remain bullish as long as 2.646 support holds. But TNX could start to feel heavy between 3.0 and 3.248 (2018 high), which could limit the upside until further development. That could, nonetheless, continue to provide support to Dollar, in particular against Yen. 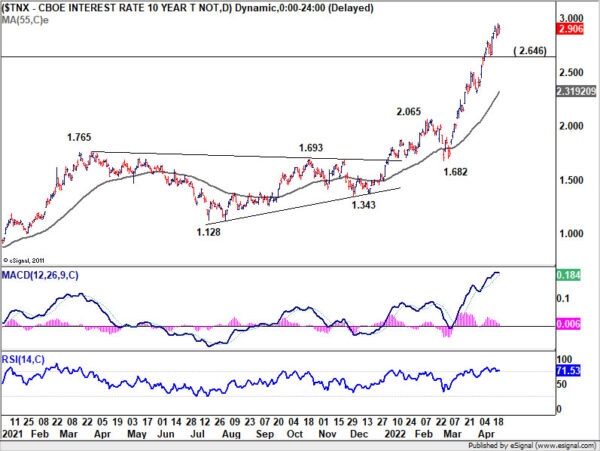 Also, it should noted again that the multi-decade channel resistance as seen in the monthly chart is considered decisive violated already. Focus is now on 3.248. Firm break there would confirm the start of a new era, of finally a long term trend of rising treasury yield and interest rates, probably accompanied by persistently strong inflation. 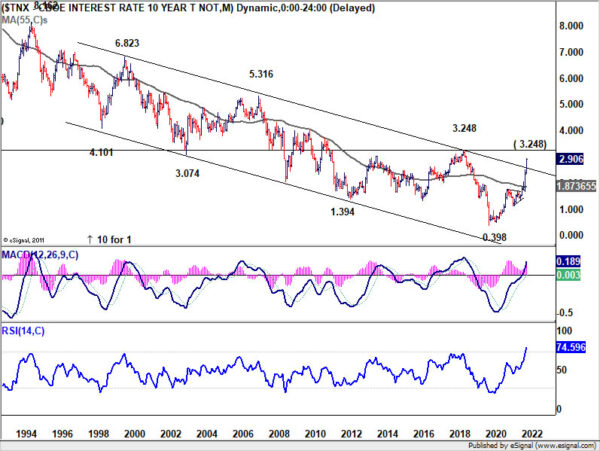 Dollar index rode on risk aversion and Fed expectations and resumed recent up trend last week. It’s probably finally having the momentum to get rid of 100 handle with some conviction. In any case, outlook will stay bullish as long as 99.41 resistance turned support holds, next target is 102.99/103.82 long term resistance zone (2020 and 2016 highs respectively). 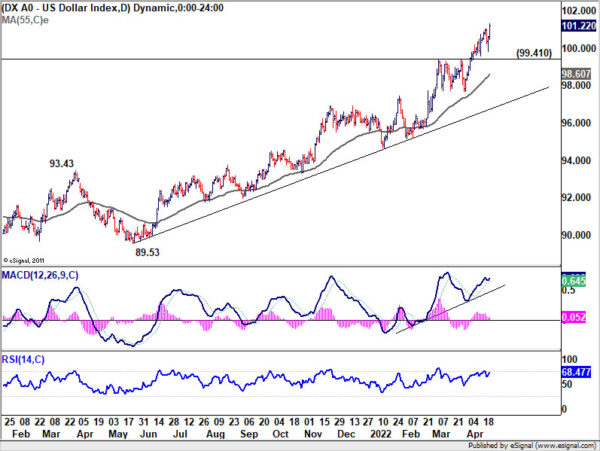 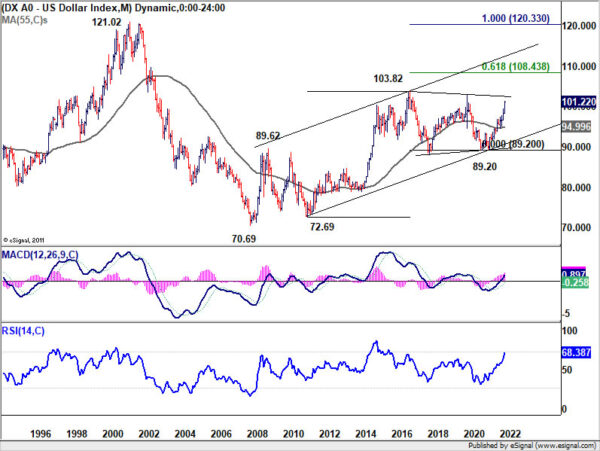 Aussie and Kiwi were the worst performers last week, suffering much from risk aversion. NZD/USD’s strong break of 0.6728 support should confirm completion of rebound from 0.6528 at 0.7033, after failing medium term channel resistance. Deeper decline is expected through 0.6528 low to resume the whole decline from 0.7463. 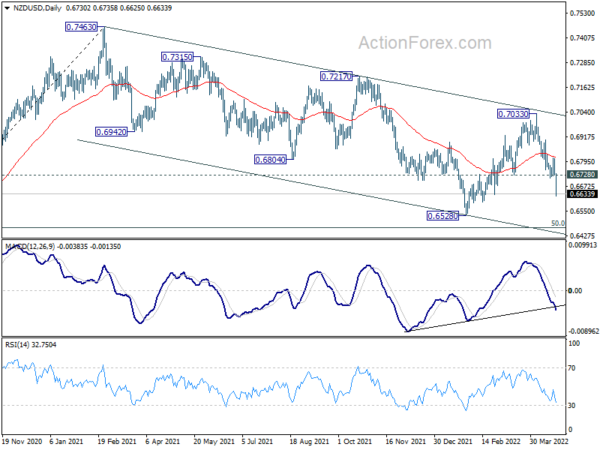 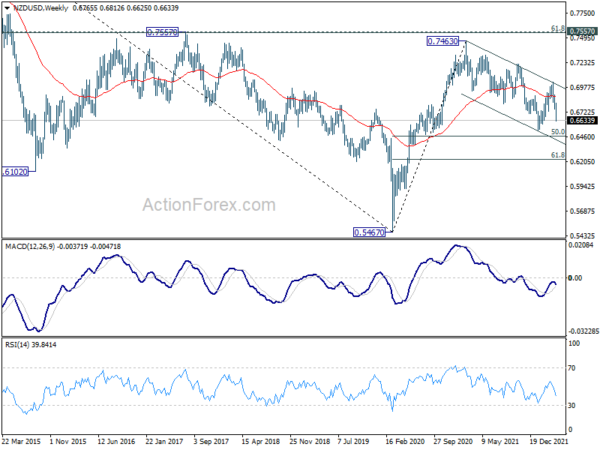 AUD/USD also tumbled sharply last week. 0.7164 structural support now looks rather shaky (considering that NZD/USD has broken corresponding level already). Break of 0.7164 will argue that the whole corrective decline from 0.8006 high is still in progress, and it’s starting the third leg. Such correction could complete only after after a take on 50% retracement of 0.5506 to 0.8006 at 0.6756. 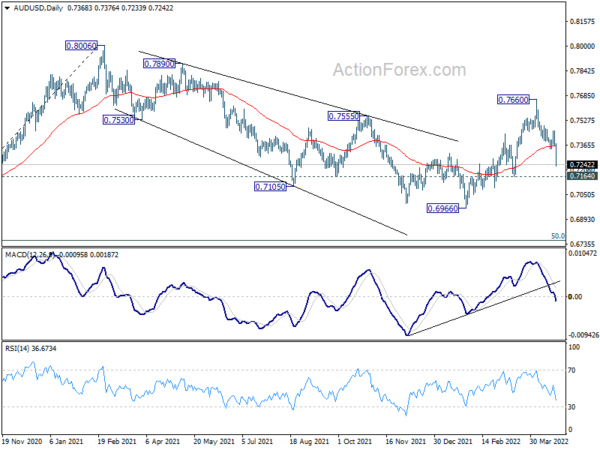 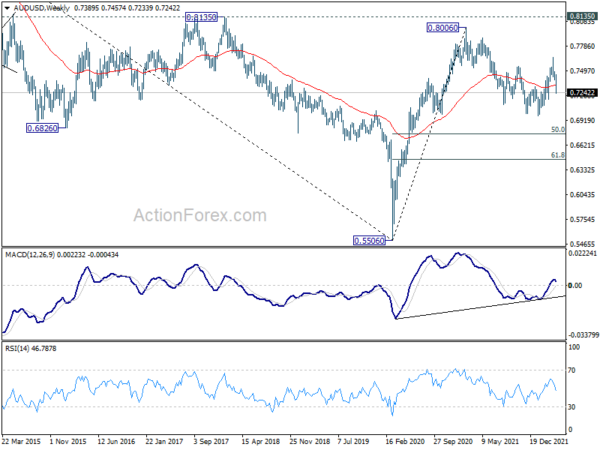 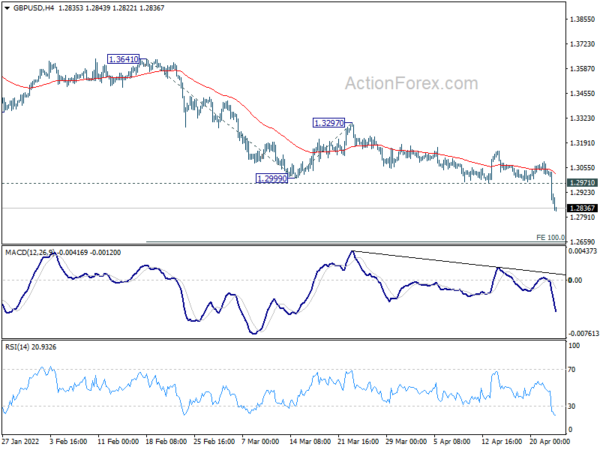 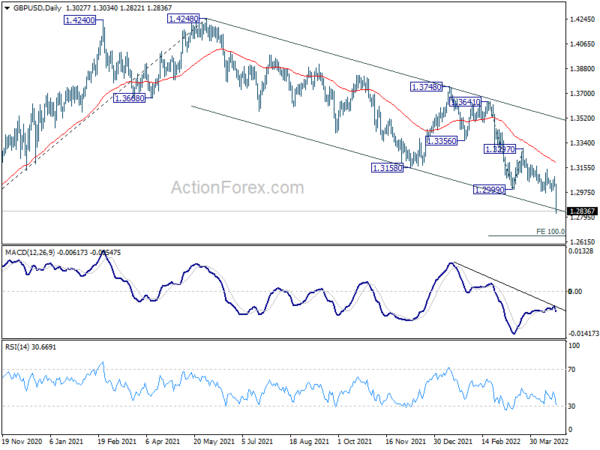 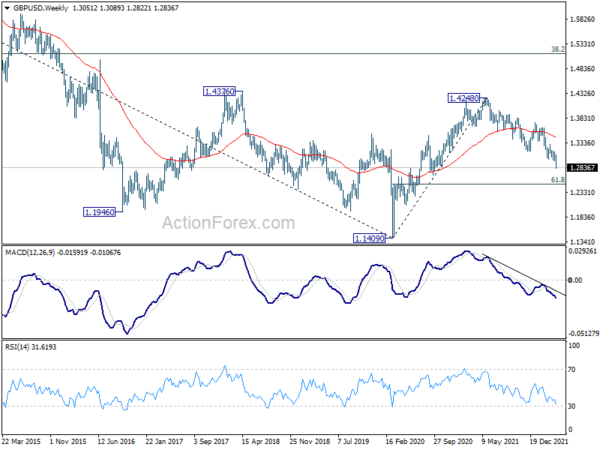 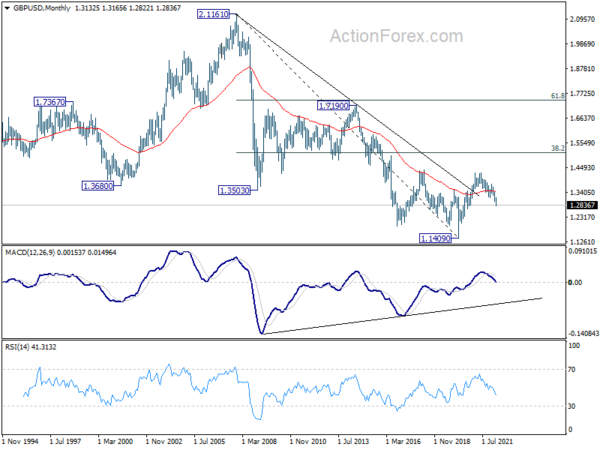